Vietnam veteran Richard Isaac has visited the Memorial Wall in Washington before, but this trip was different. 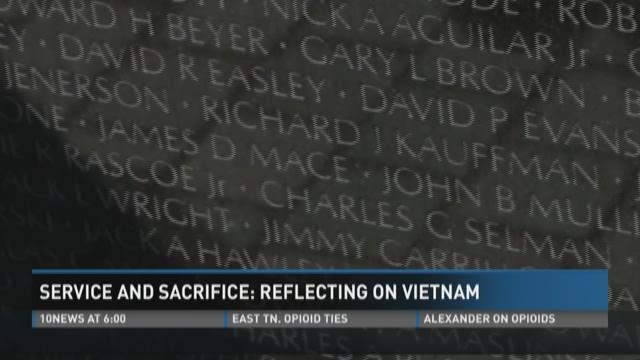 When Richard Isaac touched down in Vietnam at the height of the war, the 23-year-old heard his life expectancy was measured in seconds.

“The processing clerk looked at me and said, Lieutenant, what is your MOS (military occupational specialty), and I said, artillery. And he said, congratulations, your life expectancy is 13 seconds. And obviously that was an exaggeration but to some degree it was pretty accurate,” said the now 72-year-old Army Veteran who served as a forward observer.

Mr. Isaac was aboard the latest HonorAir Knoxville flight to Washington D.C. It marked the 25th all-expenses paid roundtrip to the capitol for East Tennessee veterans. In all the group has escorted more than 3,200 veterans in the last decade.

In addition to the on camera interview with Mr. Isaac, he also answered the following 10 questions about the influence his three years of military service had on the rest of his life.

Absolutely today. Not so much in the Vietnam era.

By just saying "Thank You"

By thanking them and showing them great respect.

This generation of military is composed of volunteers where as mine was mostly draftees. Otherwise very similar in my opinion.

My military service paved the way for a growing up process and in many aspects taught me accountability, responsibility and teamwork.

My two brothers served in the Air Force and Army. My father was in between the two World Wars.

I would not encourage nor discourage younger generations in my family. Although, if we are in a war and our country is at risk, I would absolutely encourage them.

My opinion of war has changed in that if we are going to war, it has to be for the absolute right reasons, and we go to win.

I remember praying with regularity while in the military, more so in Vietnam. During that time I felt closer to my religion and faith, and it instilled my beliefs that I have today.