Ready for round two? Tips to get Garth Brooks tickets faster on Sept. 19

The Ticketmaster site crashed last week after so many tried to buy tickets to his November concert at Neyland Stadium in Knoxville. 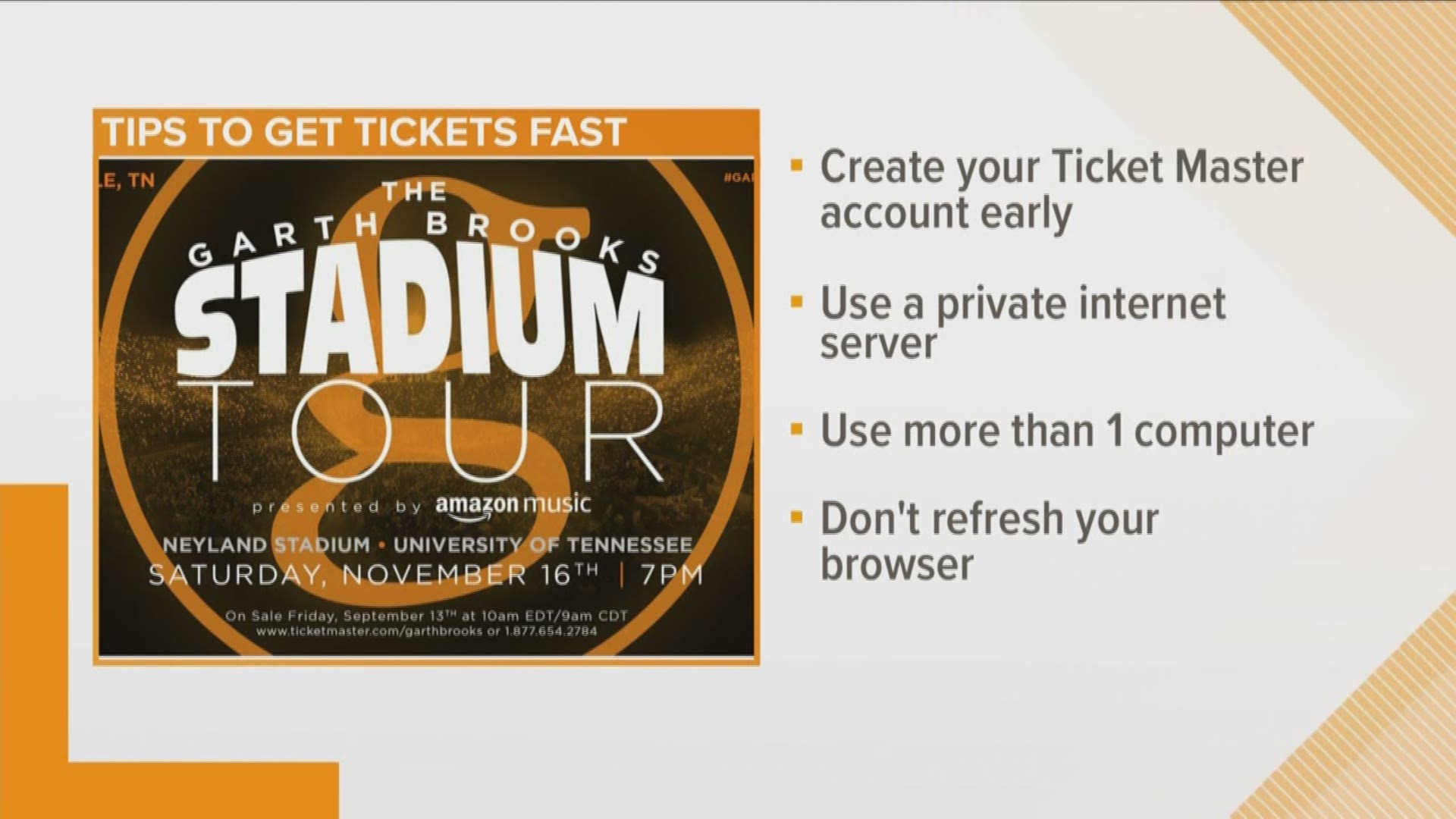 KNOXVILLE, Tenn. — Garth Brooks fans, get ready for round two! Tickets to attend his concert in November at Neyland Stadium in Knoxville will be back on sale Thursday, Sept. 19.

The Ticketmaster site crashed last week after so many tried to buy tickets that it was overwhelmed.

Sales will pick up where the system froze.

The good news for fans? Thousands of tickets are still available, according to Visit Knoxville President Kim Bumpas.

“I think we knew there was going to be so much excitement and a lot of people,” Bumpas said. “But did we really anticipate selling 1,000 tickets per minute? Nope!”

RELATED: Garth Brooks to hold concert at Neyland Stadium in November
Some fans were waiting online for hours to get tickets. According to Bumpas, that's when Garth Brooks and his team postponed the sale to provide a better experience for buyers.

“I think we'll go slow and steady this time, and not let so many people into the buying experience at one time,” Bumpas said. “That's what obviously slugged the system down.”

In an interview last week with 10News, Brooks apologized to fans who weren't able to get tickets yet, but said he is excited for the show.

“Right now this is shaping up to be one of the biggest parties of my life, so again my apologies, but at the same time I can’t tell you how grateful I am,” Brooks said.

Remember there are only three ways to buy tickets to the show: via Ticketmaster's website, its app or by calling the Garth Brooks Line at 1-877-654-2784.

Buyers can hold a place in line early by hopping online at 9 a.m. in a virtual waiting room. That will secure buyers' place in line for tickets when the sale begins at 10 a.m.

Here are some pro tips from TicketMaster that may help you get those tickets faster:

1. Create your TicketMaster account early: Update your credit card information and make sure everything is good to go before tickets go on sale.

3. Use multiple computers: Are two computers better than one? In this case, they can be. Using more than one computer can double your chances of getting those tickets as quickly as possible.

4. Use only one browser: Don't use more than one browser on each device. If you do, TicketMaster may think you're a robot and cancel your tickets.

This concert has the whole town buzzing. It's only the third known concert at Neyland Stadium in its nearly 100-year history. The others were the Jackson 5 in 1984 and then Kenny Chesney in 2003.