Dolly's Pirates Voyage Dinner and Show literally had me dropping my jaw into my plate of fried chicken. 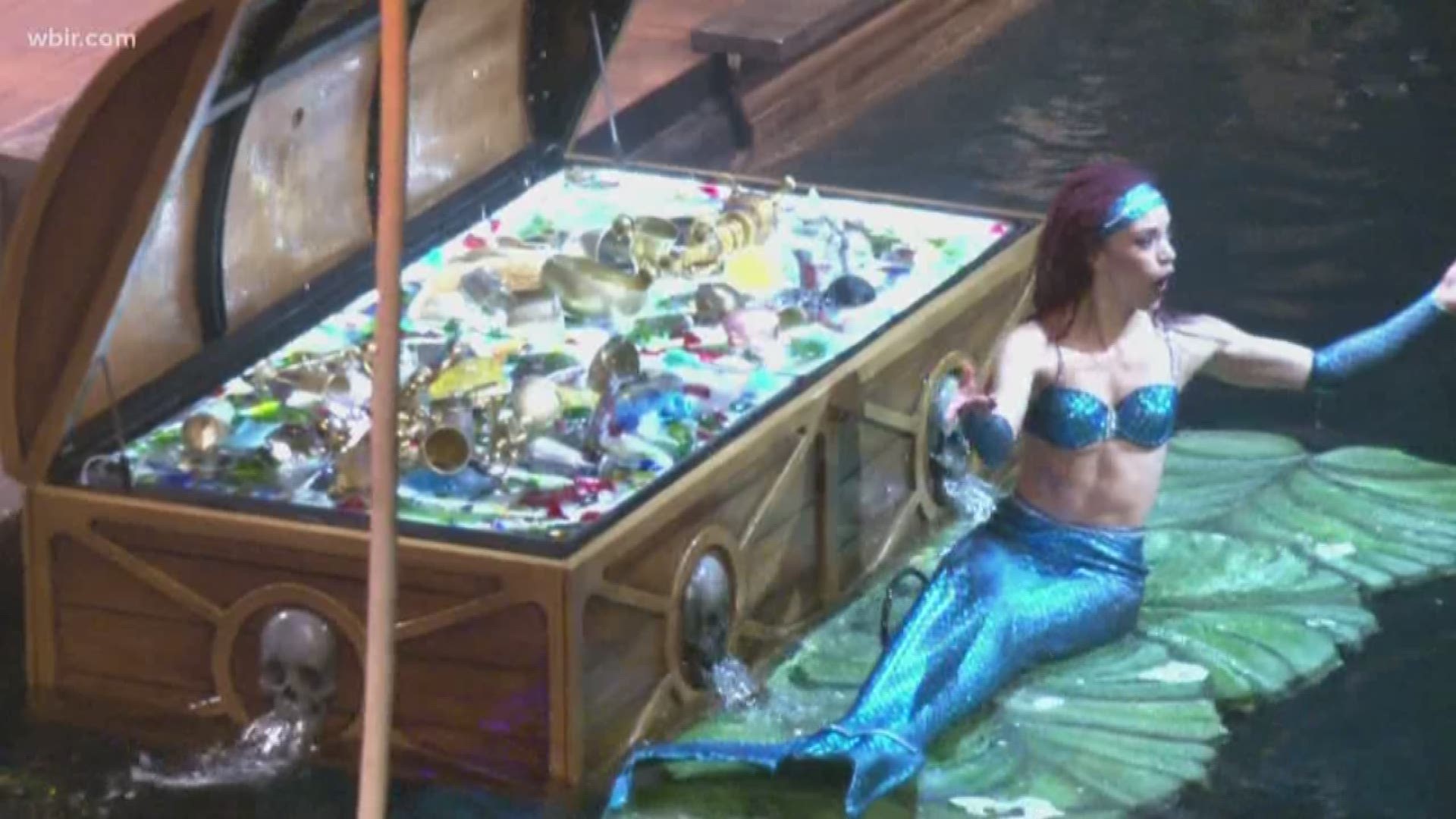 PIGEON FORGE, Tenn. — You know how sometimes you watch a play or musical or performance and think, 'these actors are fine, but I could probably do better'?

Dolly Parton's Pirates Voyage Dinner and Show is not one of those performances.

Because holy cow, what did I even just watch?

I mean that in a good way because every species that performed on this aquatic stage was insanely talented.

Let me set the scene.

You walk in the door to Pirates Village, a period-themed lobby where you can buy drinks, swag, or get a pirate makeover complete with a hook hand and single gold hoop earring.

Once you're dressed appropriately, you enter into the pirate's lagoon, called Buccaneer Bay.

It's a massive vat of water with a pirate ship deck in the middle, look-out posts there and on either corner of what's called the arena, and two massive pirate ships (one red and one blue) with diving boards jetting out the windows.

Parrots fly around the ship as people find their seats and get ready to chow down.

He isn't messing around because this dude has two ships with two captains and two pirate hordes working at his beck and call.

The Sapphire Pirates and the Crimson Pirates divide the arena, and you cheer for the pirates on your side of the stage.

I was a Crimson pirate, and it was lovely.

No matter the color of the pirate, they were all so stinking talented that I kept hitting my coworker next to me to look at the stage that he was already looking at because I couldn't believe my eyes and wanted him to know.

There is a rhyme-and-reason to the acrobatics and stunts, which I'll get to.

The two pirate clans are battling it out for the treasure. Because, according to Davy Jones' ghost, only one ship can be the winning group of pirates.

His ghost came out of the smoke-covered water with a posse of black-lit skeleton pirates and it was super creepy so they decided they should probably listen to Davy Jones. Smart move.

But before the pirate games can begin, we gotta meet some of the non-human stars of the show.

In a number set to a song sung by Dolly Parton, mermaids come down from the ceiling sitting on anchors.

These mermaids are so strong, like wow all that swimming around has given them the bodies of Olympic swimmers. Some of them actually are Olympic athletes, according to Dolly. They're doing all kinds of acrobats from their suspended anchors before diving into the lagoon as graceful as can be.

They were fab, but the real star of this show was Salty The Sea Lion (who is my new celebrity crush).

Salty came on to the ship to steal Blackbeard's gold, which he did successfully because he's a genius and highly skilled actor who I'd love to book for my next birthday party.

When the pirate games begin, lucky audience members get to join the cast in herding some ducks and playing other pirate games. And two pirate dogs come out to fetch prizes for their respective Sapphire and Crimson crews.

Things get a little testy when there's a tie and Blackbeard declares his pirates figure out the winner via sword fight.

But don't fret, everyone survives and it turns out they're all such darn good pirates everyone gets the treasure.

Throughout this spectacle, the cast is diving, rope swinging, trampoline jumping, spinning from ropes in the ceiling, using a trapeze, tumbling, flipping and just being generally awesome.

Also at one point the water set on fire?!?!

If this is what all pirates are like, I need to hit the gym and the pool and the trampoline if I want to get recruited.

Want to be a pirate yourself and eat a bunch of chicken, biscuits, soup, macaroni, sweet potatoes, and pie? Pie-rate. Pirate. Hahaha.

Good luck on your voyage, matey.