The Calderwood community hasn't existed since the 1960s. This slowly decaying hillside church is one of the last hints of its heyday. 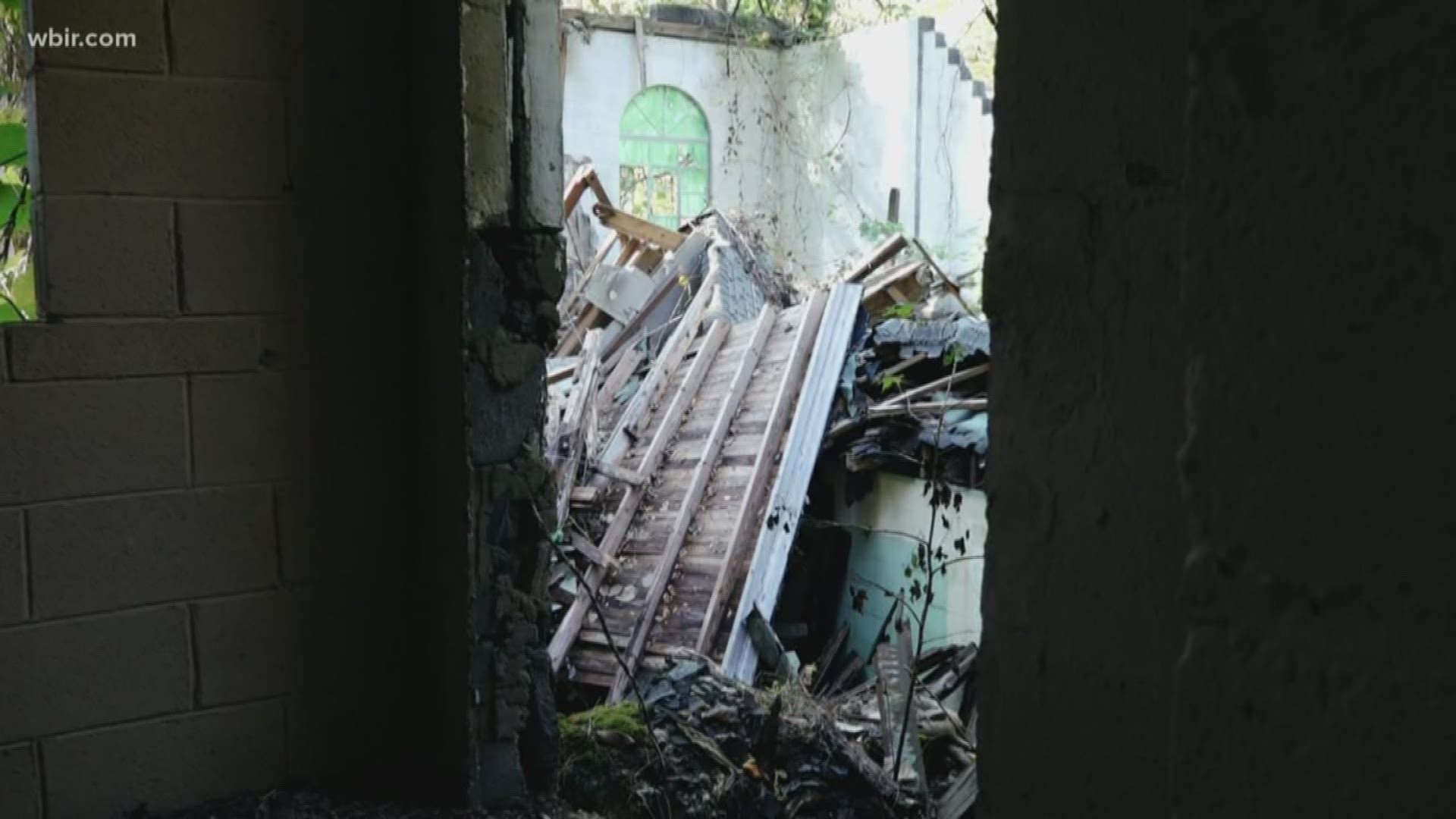 BLOUNT COUNTY, Tenn. — Cruising down the winding switchbacks of The Dragon (also known as U.S. 129), you will likely never spot the town of Calderwood unless your vehicle is equipped with a flux capacitor.

This former Blount County community hasn’t existed since the 1960s.

Established in 1912 as a hydroelectric base for the Aluminum Company of America (ALCOA), the town was home to workers building the Cheoah, Santeetlah, Calderwood and Chilhowee dams.

“They called it Alcoa for a long time before they decided to change the name and from there they named it after their chief engineer, Mr. [I.G.] Calderwood, that lived here,” said Earl Baldwin, who can trace his family roots to the community over several generations.

Though the community was relatively small, topping out around 3,000 residents in the mid-1950s, it was still a boon.

Families and visitors enjoyed access to tennis courts, gymnasiums, a theatre/dance hall, two churches, a school, a motel, expansive sidewalk systems perfect for roller skating, and a luxurious resort with a golf course across the Little Tennessee River that could only be reached by ferry.

Calderwood’s boom was short-lived and was all but abandoned by the 1960s when the work on the dams was completed. Practically all of the town’s buildings were razed shortly after, leaving behind four original structures and sidewalks leading to nowhere.

“You’re going to see the occasional bear or hog, but you’re not going to see any kids rollerblading unless they’re some wild kids,” Baldwin said.

The two churches, Calderwood Methodist Church and Calderwood Baptist Church, are two of the only hints that the community ever existed.

The methodist church and its adjoining cemetery are still maintained by volunteers, but the baptist church is a different story.

Calderwood Baptist Church hosted its last Sunday service in 1993 for the remaining 10 members who kept it open.

Once their cars pulled out of the concrete lot in the back, creeping kudzu blanketed the area in a thick tangle of vines before slowly swallowing the little tan building on the tree-lined hillside.

The church’s roof collapsed a few years ago, completely covering any hints of its layout with debris. Fragments of the pea-green stained glass windows cling to silver frames. The rusted front doors hang limply on their hinges, opening into a deep pit of twisted shingles and splintered wood.

Despite its derelict state, those crumbling walls still hold stories from the community, even before its foundation was poured.

The structure that still stands today was actually the “new” building completed in the mid-1950s, but Calderwood Baptist Church started out as a primitive one-room place of worship where hymns drifted out of open windows.

See Calderwood featured in an episode of the Heartland series:

Baldwin recalled a story his grandfather told him about chasing a bat that flew in during a revival service.

Though nature has virtually reclaimed the town, Baldwin said it does not change the fond memories he has of visiting with his family for Calderwood reunions.

“I’ve been here for forever and they were here forever before me so if I’m going to keep them alive, I have to keep this place alive. And that’s just how it is. This place is part of who I am,” Baldwin said.

He said the place and its history continue on through stories and memories, even without physical structures.

“The stories can last longer than the building, but when that building’s gone, the stories, the things that happened inside it, the people’s lives that changed, they won’t leave if we keep spreading the story and just keep telling it,” Baldwin said.

The area where the Calderwood community once stood is now owned by Brookfield Hydropower, but the riverfront land is still open for public use (as long as you are out by 3 p.m. when the gates close) so everyone can continue to enjoy the natural beauty.

There is not a definitive plan for Calderwood Baptist Church, but for now, it stands as a reminder for the days when the little boomtown powered a Blount County enterprise rather than serving as a scenic stop off The Dragon’s switchbacks.