Pressmen's Home was once an idyllic, self-sustaining community where pressmen lived and learned. Now, little evidence remains of the former union headquarters. 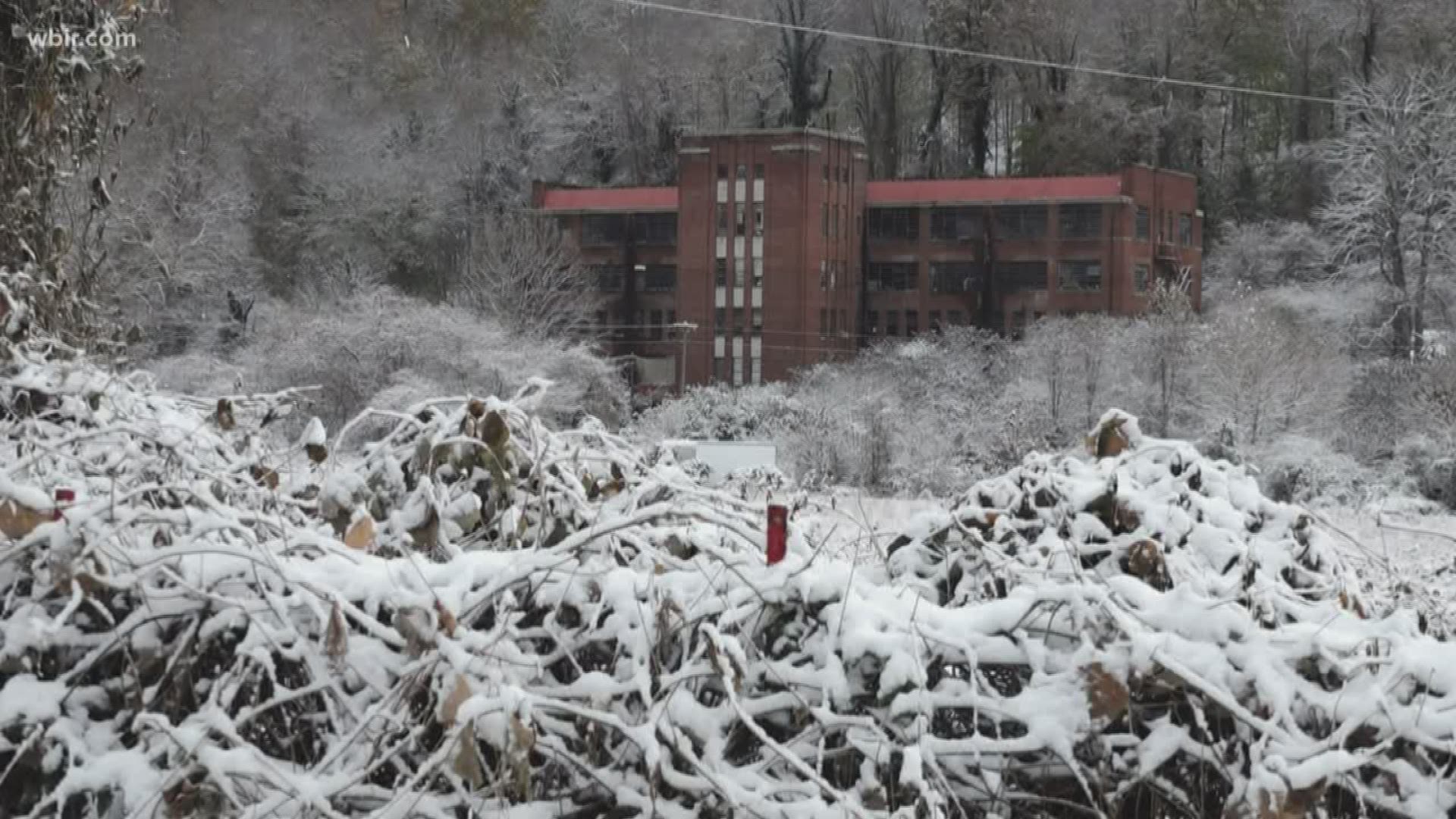 Scattered along Highway 94 outside of Rogersville are ruins of nearly forgotten Hawkins County history.

Broken windows, crumbling bricks and kudzu-covered foundations do little to convey the luxury and healing that drew many to this quiet valley for over a century.

Tracing its boom time roots to the mid-1800s, the area was originally home to the Hale Springs Resort, a vacation destination that offered baths in healing mineral springs and luxurious lodging.

Despite its popularity, the resort went bankrupt by the early 1900s. However, the area would not sit dormant for long.

George L. Berry, president of the International Printing Pressmen and Assistants Union (IPPAU), convinced the union to relocate its headquarters to Hawkins County from Cincinnati, Ohio in 1909.

He purchased the former resort for roughly $8,000 to turn it into a tuberculosis sanatorium for ailing union members.

Over the next few decades, the area, dubbed the Pressmen’s Home, quickly grew into a sprawling, self-sustaining community.

“From what I was told, all they brought in was salt and coal, and they grew everything else, all their food; generated their own electricity; had their own water system, telephone system; fully self-contained community,” said Tim Carwile, general manager of Lakeview Utility District, which operates a water filtration system out of a refurbished Pressmen’s building.

Aside from the sanatorium, Pressmen’s Home also boasted an administration building, a trade school and virtually any building necessary to live and learn the trade.

However, Pressmen’s Home was not just a place to work as many members moved to the area with their families so the union added a wide variety of amenities, allowing residents and visitors alike a taste of the high life.

The natatorium, the county’s first modern swimming pool, with a retractable roof for year-round enjoyment was built in 1916.

Soon after, tennis courts, a miniature golf course, a baseball field and two hotels with a service station and garage were added to the sprawling property.

“It was geared not only to train the pressmens but also to provide a family-type atmosphere for people to bring their families here also,” Carwile said. “I’ve heard lots of stories from lots of people in the area about what a magical place it was.”

In the mid-1920s, Berry convinced the IPPAU leaders to build a chapel on the grounds in memory of the 111 pressmen killed during World War I. The chapel, which could seat 500 people, was dedicated by East Tennessee war hero Sergeant Alvin C. York in 1926.

Berry, a local boy, took a piece of the area’s natural beauty and built a castle-like mansion just outside of the main Pressmen’s Home hub in 1928.

The union used all of these luxuries for the next four decades, hosting the IPPAU Conventions under massive circus tents on the property and training up generations of pressmen.

“Pressmen’s Home meant a lot to a lot of people throughout the whole U.S.,” Carwile said. “They were the forerunners and they fought for the 8-hour workday, minimum wage, good working conditions, health care for employees. The union was a good part of it.”

However, Berry’s death in 1948 marked the beginning of the end for the idyllic community.

His “castle” burned to the ground in 1954 leaving behind only a stone fish pond and a stucco dog house.

Meanwhile, politics and problems with the community’s remote location plagued the Pressmen’s Home until union leaders officially moved the headquarters to Washington, D.C. in 1967.

“They decided to move the headquarters to the Washington, D.C. area to be closer to areas of influence and it’s gone downhill since then,” Carwile said.

In the 1970s, developers tried to start a country club community, complete with a golf course in the area, called Camelot.

This plan did not last, and the Pressmen’s Home continued to deteriorate, despite being added to the National Register of Historic Places in 1985.

Arson and Mother Nature have done their best to destroy any evidence of the once-thriving union headquarters.

Both hotels were destroyed by fire leaving behind little more than expansive foundations and staircase wrapped up in a blanket of kudzu. Vandals turned the burned-out remains of Pressauna Hotel’s service station into their personal graffiti canvas.

The administration building and trade school are privately owned and still stand in various stages of decay with a variety of European wartime vehicles littered throughout the property, the half-completed projects of a former owner.

The old engineering office and power building slowly rot away just off the roadway. The towering red brick smokestack still emblazoned with a fading white “PH” on top.

The beloved chapel is practically inaccessible and slowly being reclaimed by nature. Its roof is most caved in, and its stained glass windows are busted out.

Others have tried to recapture the glory of this gorgeous valley village, but their plans have ultimately fallen flat.

The Christian Entertainment Network tried to propose a Christian-themed attraction exclusively for 25 to 54-year-old Christian men, but county leaders brushed the idea away.

Then the California-based New Paradigm Institute and EarthWays Foundation bought some of the land to establish an environmental education center, but little progress can be seen in the area.

In 2005, Carwile and the Lakeview Utility District took over the old Pressmen’s Home plumbing and heating shop, which was built in 1948, and converted it into the area’s first state-of-the-art membrane water filtration plant.

His team used as much of the original structure as possible to preserve its history, even leaving the peeling green shuffleboard outlines on the shiny wooden floors on the second story.

“It is still solid. It’s in good shape, and I anticipate it being around many years down the road,” Carwile said.

They have also spent time collecting relics from the Pressmen’s Home glory days.

Old photographs are displayed in frames made from wood reclaimed from crumbling buildings on the property. Wooden posts with deep hammer marks left behind from the shop’s construction are left exposed. A massive weathered, faded map of the community from 1940 hangs by the plant’s front door.

Though Carwile recognizes the former community’s significance, both locally and nationally, he is also driven by his own history with the valley, which goes back more than 10 years before the Lakeview Utility District moved into the area.

He was on a motorcycle ride with his wife in 1993 when they noticed a Pressmen’s Home road sign and took an unexpected detour down Highway 94.

“Within the first mile or so, the wife smacked me on the back of the head and says, ‘What’s wrong with you?’ and I says, ‘There’s something going on in this valley,’” Carwile said. “I’ve been through valleys all over the world, all over the states, and I just felt a magic as I rode down the road. Then when we came into Pressmen’s Home and the valley opened up, I said, ‘My God, what was this place?’”

Little did Carwile know, he would return to this magical valley in 2001 to work with the Lakeview Utility District and be a part of preserving its history.

“History is important, and if you don’t know where you’ve been, you’ll have no idea how to get where you need to go,” Carwile said.

Today, the California-based environmental groups still own much of the property, but there is no definitive word on their plans.

A local singer-songwriter claimed the old dairy barn over the summer, turning it into a music venue called “The Castle Barn” in an effort to revitalize the area.

For now, the former union community will continue to sit quietly in its valley waiting for a time when its magic can bring the area back to its former glory.