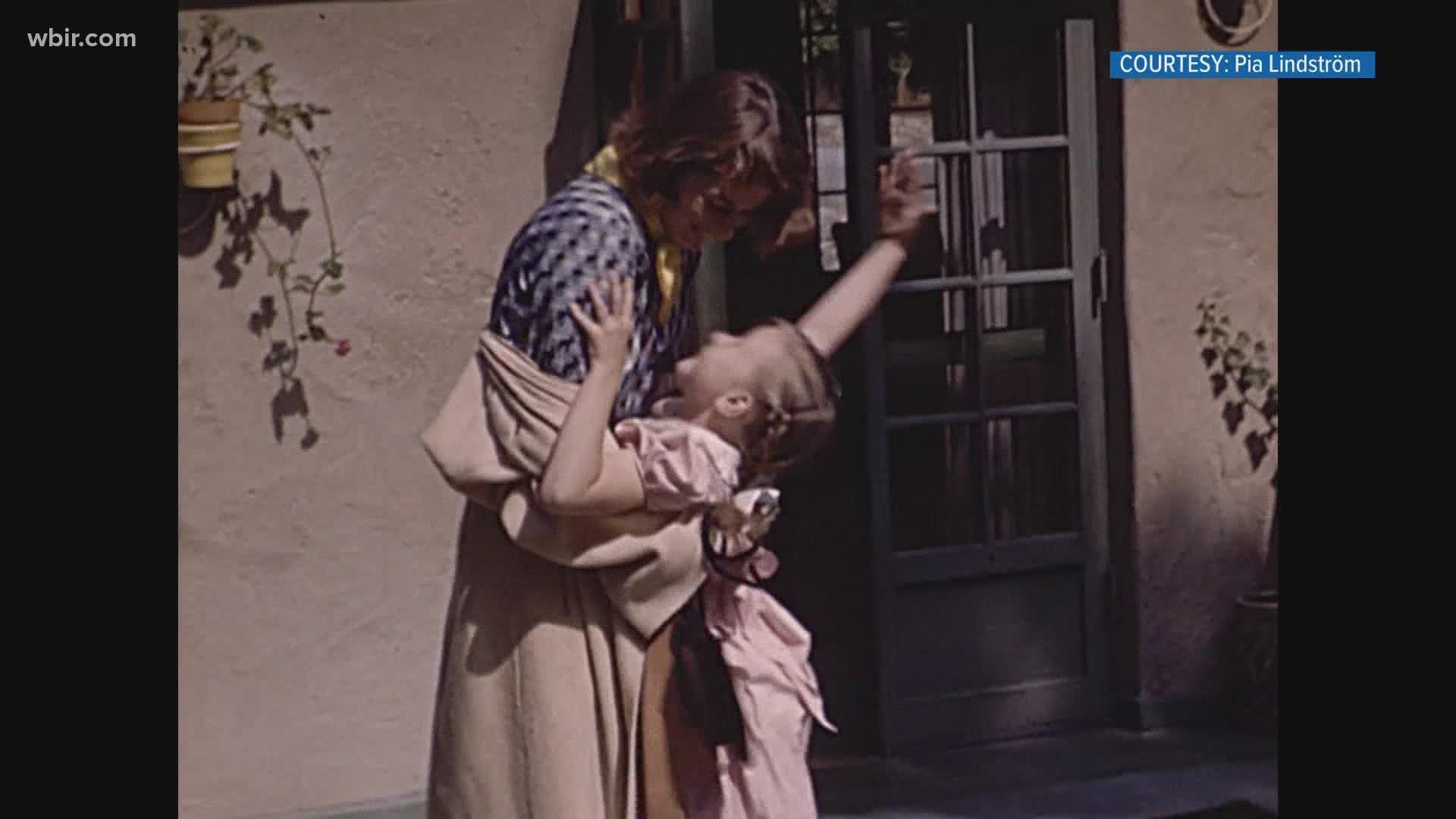 Wandering the streets of old Europe, celebrating her and first husband Petter Lindstrom's new swimming pool in Hollywood, cuddling with the family terrier -- whatever she was doing it's obvious she was blessed with beauty, grace and a playful personality.

Knoxville film guru and preservationist Bradley Reeves had the rare privilege last year of viewing the old family footage and digitizing it for a project on behalf of Bergman's oldest child, journalist Pia Lindstrom.

It's a task Reeves handled with meticulous care and attention.

"I was scared to death," Reeves said this month, reviewing the project with 10News. "Every frame of that is precious."

The film stock was delicate, and some of it dated to the 1920s when Bergman was a child in Sweden with her father Justus Samuel Bergman, who died when Ingrid was not quite 14.

Some of the films may have been made by Bergman herself, he noted.

"She was always photogenic," Reeves said.

The three-time Oscar-winning actress starred in such classics as "Casablanca", "Notorious", "Indiscreet" and "Spellbound". She was one of director Alfred Hitchcock's favorite actresses.

Bergman was awarded best actress honors for her work in "Gaslight" and "Anastasia" and won a best supporting actress Oscar for her appearance in "Murder on the Orient Express" toward the end of her life.

Bergman's decades-long career even brought her to East Tennessee. She shot the movie "A Walk in the Spring Rain" in 1969 with Anthony Quinn, and then came back a year later to Knoxville for a premiere, graciously planting a dogwood tree on Market Square and adding her autograph in concrete outside the Capri Theater in Bearden.

1 / 9
Pia Lindstrom
Bergman brings out the champagne to celebrate the new pool, 1940s.

Reeves worked several months digitizing the roughly 8 to 10 hours of film Lindstrom sent him. He won the job by bidding on it -- and he was prepared to do it for free if necessary.

The home movies run the gamut from Bergman's childhood to a brief glimpse of Pia Lindstrom as a baby in the late 1930s to a cookout with Hitchcock and the christening of the new California pool -- complete with champagne -- in the 1940s.

In one clip, she and her daughter unfurl giant birthday cards sent to her by adoring fans for one August 1940s birthday.

"The home movies themselves really depict the private life of this woman who came to Hollywood, and wanted to kind of remain private. You know, she did what she did," Reeves said.

While Bergman was one of Hollywood's most celebrated actresses, she also was modest and self-effacing. She told British chat show host Michael Parkinson once in 1973 she never thought of herself as being especially pretty. Bergman compared herself to the girl next door -- an image she sometimes bucked by trying to play the "bad" character in the movies.

Bergman tended to shun Hollywood studio dictates, preferring to present herself as she was without a lot of makeup or artifice. She was also one of cinema's taller actresses, standing 5 feet 9 inches, even taller than Katharine Hepburn.

She told Parkinson sometimes her shorter male co-star would have to stand on a box in order to be eye level with her on stage or on screen.

But that wasn't a problem when she played opposite 6-foot, 2-inch Cary Grant or Gary Cooper, 6 feet 3 inches, to whom she was very attracted.

In the late 1940s, she had an affair with Italian director Roberto Rossellini. She would eventually marry him and have three more children, a son, Roberto, and twin daughters Isabella, who also became an actress, and Ingrid.

Bergman endured scorn from some in that era because of her love for Rossellini, but carried herself with dignity and strength. Bergman stayed away from Hollywood for many years then, finally returning in the late 1950s.

A STAR COMES TO KNOXVILLE

The film includes scenes from downtown Gatlinburg -- even then touristy and kitschy -- and Cades Cove. Quinn, best known for films such as "Zorba the Greek", was called upon to play a roughhewn East Tennessean.

It's not the best film she ever made, Reeves said, but she's still excellent in the role.

"It's a magical moment. It was like Hollywood comes to Knoxville," Reeves said.

Knoxville at the time was interested in trying to promote itself on the world stage.

"The movie can be bad, it can be mediocre, it can be good, but she always shines through," he said.

By the 1970s, Bergman was ready to ease back. She reduced her acting roles, appearing sometimes on Broadway and in London in productions such as "Captain Brassbound's Conversion" and "The Constant Wife".

Bergman was diagnosed with cancer in the 1970s. She quietly fought it, telling few people she was sick.

Her last performance was as Israeli Prime Minister Golda Meir for television, a role she was determined to see through.

Bergman died in August 1982, on her 67th birthday. She is interred in her home country of Sweden.

"She was glamourous, she was beautiful," Reeves said wistfully.