To get a little perspective on the Greatest and Silent Generations, we spoke to residents at Knoxville High Senior Living about how life has changed since they were born. 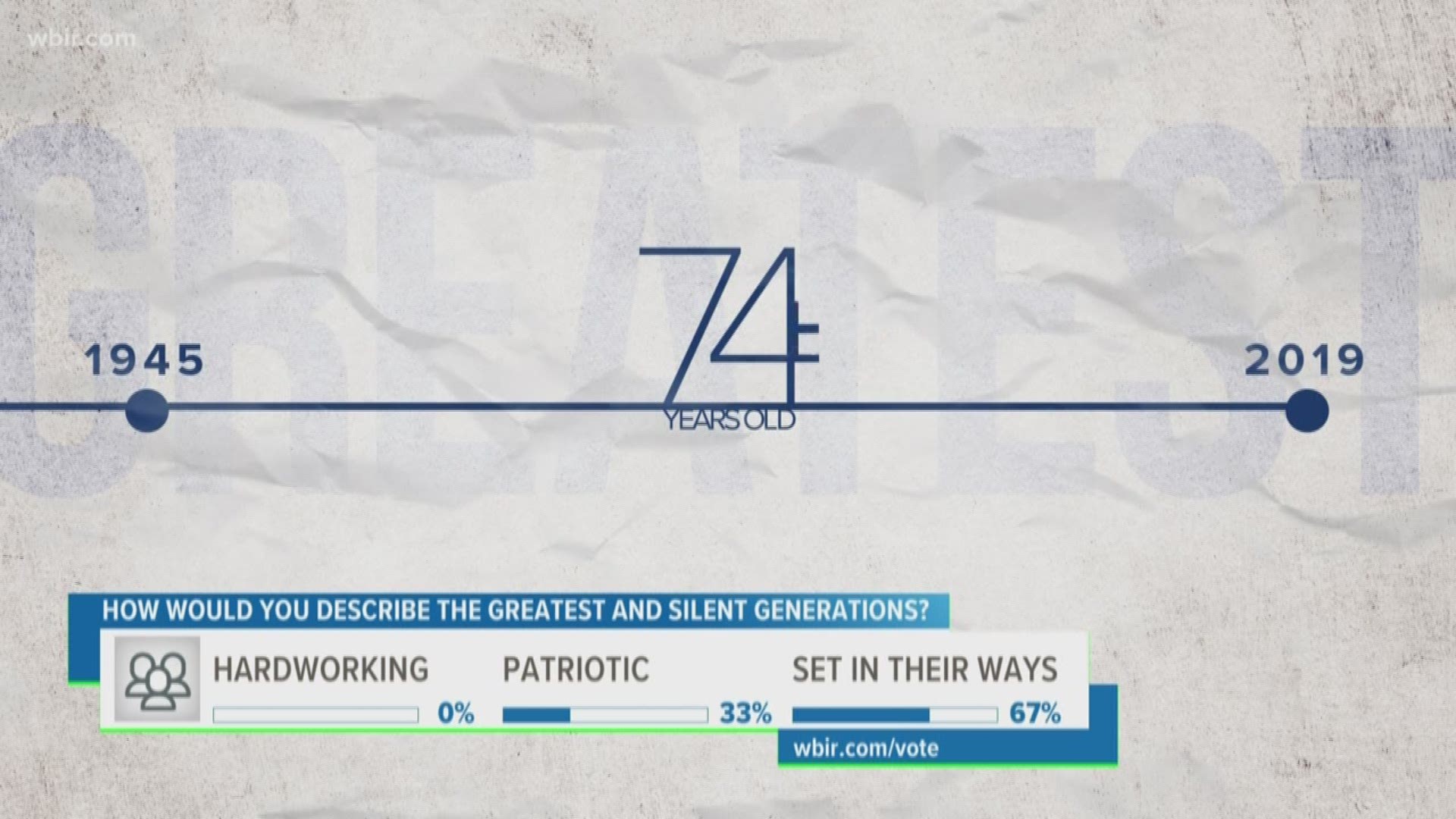 To get a little perspective on the Greatest and Silent Generations, we spoke to residents at Knoxville High Senior Living about how life has changed since they were born.

When asked about the greatest thing about these generations, Elizabeth said, "We did things ourselves. We group up making up our own games, and our neighborhoods were really close."

"My generation was different," said Pat. "We didn't have a lot of transportation. We walked a mile to school. The family was more together; I think more families had a blessing before the meal."

Beth remembers how her family always spent time together.

"We always sat at the table together and ate. We had rules; we washed our hands and brushed our teeth and we came to the table," she said. "Now, I watch children and grandchildren take a plate, fill it at the bar, go over to the TV room and sit and eat. They don't have that togetherness, that bonding, that we had."

When asked about the greatest milestones of these generations, Robert said, "In 1960, we elected a president by the name John Fitzgerald Kennedy. I was very devastated; that was one of the turning points in my life when he was assassinated."

"For me, in my lifetime, the greatest impact in living was the PC, Bill Gates and Steve Jobs. That changed everything," Linda said.

She also recalls Gloria Steinem and the women's liberation movement.

"I wanted to be a pharmacist; women couldn't be pharmacists. I wanted to be a bank clerk; women couldn't be bank clerks," Steinem said. "I applied to GW University; I had higher scores than most of the men. I was refused because they only took three women because women just got pregnant and dropped out. All of those women changed my life and allowed me to live the life I wanted and become a chemist."

Linda says the roles of women continue to change.

"I knew what my job was when I got married. I didn't necessarily like it, but I knew what it was," she said. "It seems like things are less defined now. They don't have clear roles in any part of their lives is what I see."

Everyone we spoke to at Knoxville High Senior Living agreed there are big differences between their generation and younger generations.

"I can speak for my own grandchildren; they have a lot of second and third chances," Linda said.

"The one thing that bothers me is the lack of being able to be competitive," Elizabeth said. "It used to be you got a trophy if you were the number one team. Now each team gets a trophy."

Lucinda said another big difference between the generations is technology.

"My grandchildren are educated in technology, and they're young, 10 years old and younger, " she said. "It has opened up the world. When we were growing up, our world was the woods and the river in Loudon."

"It's a totally different world; it's a cyber world. They don't have to have bombs anymore. All they have to have are hackers to disrupt everything," Linda said. "I think we are in this adjustment phase. Just like with rock'n'roll music, with women's liberation, it takes a while to adjust, and that's the way with technology."

Robert said another big chance between his generation and now is what families look like.

"We had a family, a mother, a father a home. Our parents were married," he said. "So many times today we see people, some who are married, some who are domestic partners. In addition to that we see some people who get divorced and then get remarried, so we have a number of blended families."

That's a big difference, he said, "When I grew up, I can't think of a single friend who had a divorced parent."

Lucinda said, "In the Silent Generation, things were going on, but they were in the closet or swept under the rug. They were not talked about."

In the midst of all of the stereotypes, social scientists are tracking trends across generations.

One of the biggest trends within the Greatest and Silent Generations is how they engage with their communities.

"The Silent Generation, in part, refers to a sense of civic duty. There's a high level of institutional commitment that, often times, is talked about with regards to Americans who are older, " Dr. Tricia Bruce, Sociologist with the University of Notre Dame, said.

Another big trend in these generations is religion.

According to a survey from Pew Research Center, 85 percent of the Silent Generation say religion is important in their lives, and 51 percent say they attend a religious service at least once a week.