This Instagram-worthy topiary chicken will give a small town something to crow about. 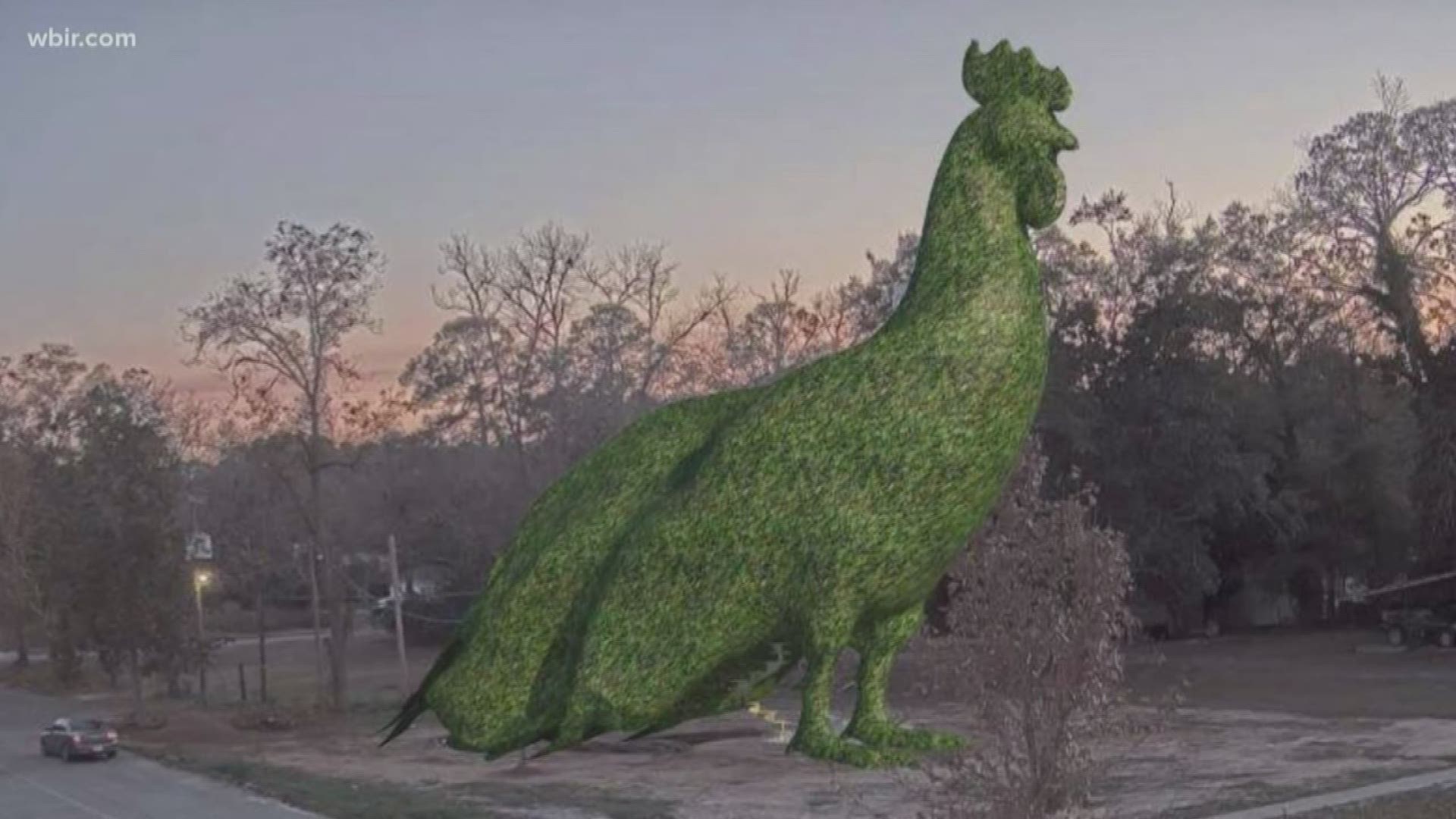 "They're famous for their chickens," Joe Kyte said.

Burmese chickens strut though the town of Fitzgerald in south central Georgia.

The town already features metal chicken sculptures and it will host the Fitzgerald Wild Chicken Festival in late March.

But it needs something to squawk about, a real feather in its cap, to move it up in the tourism pecking order.

Joe Kyte said, "That's what people go to Fitzgerald for. Not for fried a chicken but just to look at the chicken. And now we're giving them more reason to do so with this scale of a beast."

Joe Kyte, known as Topiary Joe, is creating that beast.

He and his crew in Tellico Plains, Tennessee bend steel into frames that will be draped with living plants or moss or vines.

He's made thousands of topiary animals, from elephants to giraffes. He works on a giant scale, creating custom topiary for clients around the world.

"Building a Ferrari in Dubai, the Formula One car, inside of a Ferrari shop. That was absolutely fun," he said.

Credit: WBIR
Topiary Joe has made thousands of custom topiary pieces displayed all over the world

Topiary Joe and Mayor Puckett came up with a rendering: a giant topiary chicken.

"They started clucking all around the room and I joined in and we were just like having a good time," Joe said.

The mayor set his sights on a landmark in suburban Atlanta.

Credit: Wikipedia
Mayor Jim Puckett wants the topiary chicken to be taller than the KFC chicken in Marietta, Georgia

"We wanted to build a chicken bigger than the one in Marietta. The Big Chicken in Marietta is 56-feet tall," he said.

The chicken will be taller.

"62-feet or so. And it's going to be covered in a cloth material with plants coming through the cloth that are in hanging baskets on drip irrigation that are all inside of the chicken," Topiary Joe said.

Also, inside the chicken? A room for rent as a bed and breakfast.

The town didn't have to scratch around for money to pay for the $150,000 project. A tourism fund will pay for it.

"We are doing this to draw people to Fitzgerald and so far it's done its job and it's not even built yet," the mayor said.

Credit: Jim Puckett
The Fitzgerald Chicken Festival is this March

Topiary Joe isn't winging it. With careful planning the steel structure should be ready for the chicken festival in March.

Credit: Joe Kyte
The steel bones of the giant chicken will support living plants to fill out the shape

You can watch the topiary chicken building progress live on the Fitzgerald Chicken Cam.