Guardians for Garrett is a kickball tournament with a purpose

Garrett Jablonski is a little with a big smile and a lot of love to share. 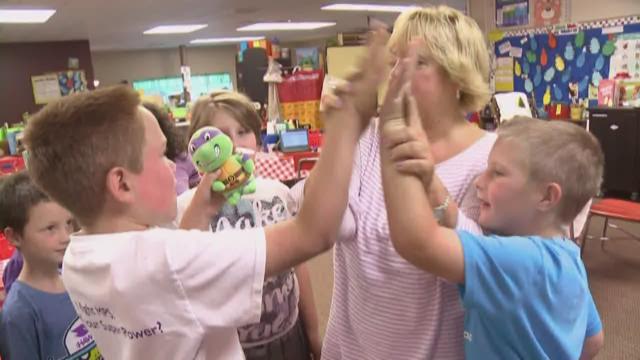 A kickball tournament later this month will be a fun family outing that will help a local family dealing with a debilitating diagnosis.

The fundraiser is called Guardians for Garrett.

The whole family is athletic. Scott and Kelli Jablonski have passed along their skills to 10-year-old Dylan who likes softball and basketball. So does her little brother Garrett.

Garrett is slowly losing his motor skills, his speech, and his ability to understand. The 8-year-old has a rare genetic disorder.

"Mucopolysaccharidoses, or MPSIII or Sanfilippo Syndrome Type IIIA," Scott said. "There's no cure, there's no treatment. And that's what he is dealing with."

His mother Kelli said, "He fights the fight and smiles every day."

Garrett has a support network and a fan club at Alcoa Elementary School.

"They're like the second parents. When we are not with him we trust them totally with Garrett and they love him," Scott said.

They love him and it shows. He is kind of the mayor of the school and beyond.

"Everywhere we go and everyone we see most people around this area know who he is. We don't know them but they know him. So it's remarkable," Kelli said.

"We walk in the park and people come up and say hi Garrett and I don't even I know this person. Everybody knows Garrett and everybody loves Garrett and that's just the way it is," Scott said.

MPS is a rare condition, so it doesn't get the attention that more common diseases attract. Friends of the family host a kickball tournament every year called Guardians for Garrett. It raises money to support research and to provide for Garrett's future care.

"It gets worse as he gets older. There's no treatment, no cure," Scott said.

"He lives in the moment. That's all he knows and it's refreshing," Kelli said.

Dylan notices the changes in her little brother but appreciates Garrett for who he is.

"He's just like a normal kid. Um, he just doesn't talk as much as he used to. And if you meet him you're going to love him," she said.

"She's the greatest big sister ever. Loves him probably more than anybody," Scott said.

A lot of people love him. A little boy with a big smile.

The Guardians for Garrett Kickball Tournament is Saturday, Aug. 26, at Rocky Hill Ballpark. Teams should show up at 9 a.m. for the games that begin at 10 a.m. Fans are invited to watch.

There is no charge to watch. Concession sales, a silent auction and a raffle are also part of the fundraiser.