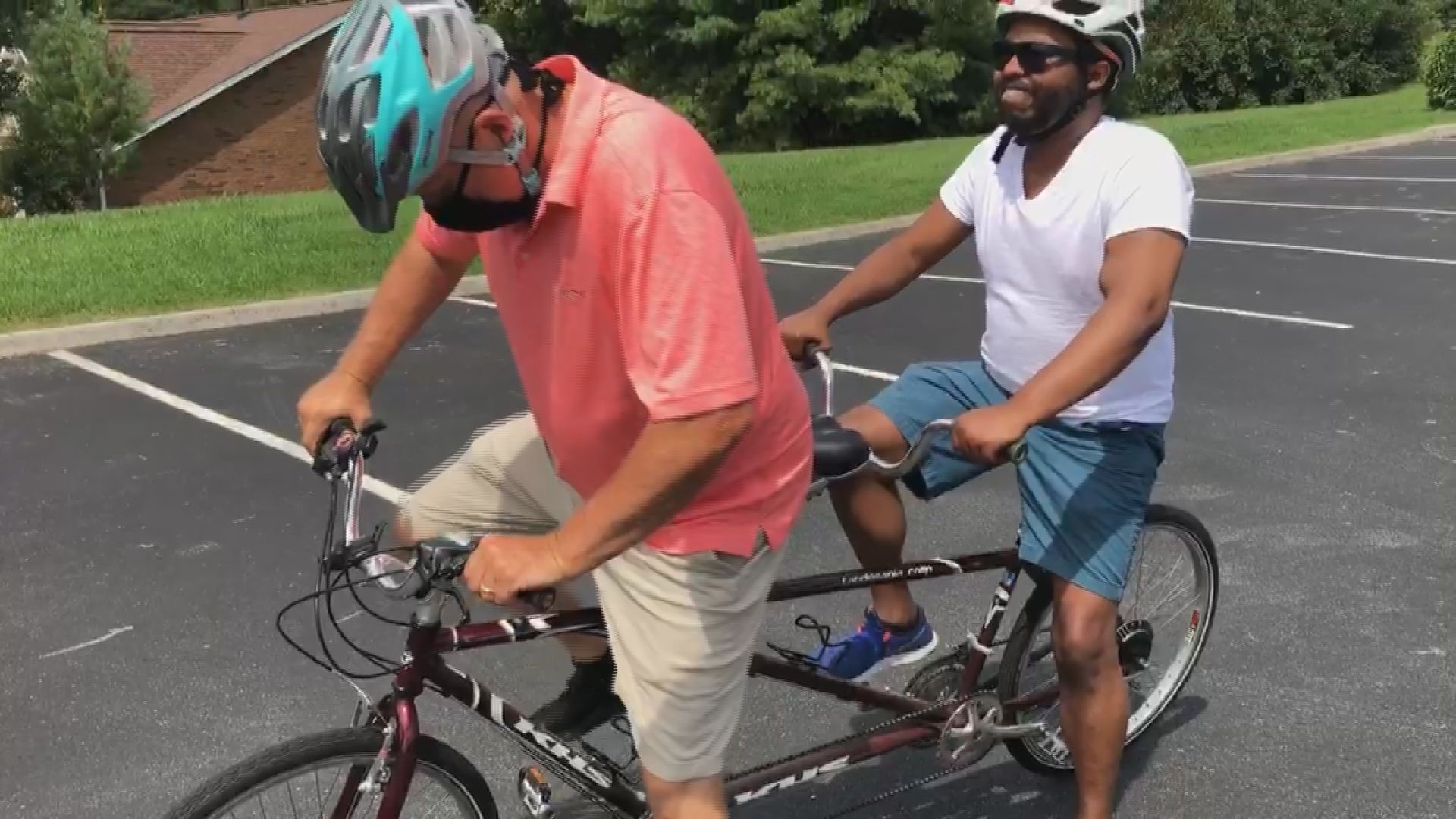 Jacoby on back as the stoker. David in front as the pilot. It was an outing with Club VIBES, a support group for people who are blind or visually impaired.

"I thought, I'm going to meet up with them and see if it's a match, and it was. And it's just been full joy for for me ever since," David Cass said.

Jacoby Yarbro said, "We actually met in Sequoyah Hills to do some tandem biking with the group and from there it's just been a match made in heaven. We hang out, go out to eat, ride in his truck singing a lot of different songs. Making up our own words from time to time."

Jacoby is joyful even as he faces tremendous health challenges.

Diabetes and glaucoma took away his sight. His kidneys failed so he does dialysis three times a week. He needs a new kidney to remove the need for dialysis.

"I'm fortunate that I still am able to get around with a little bit of a challenge but still able to do it as well as I do and I give God the glory for that," he said.

Soon after David met Jacoby he felt a connection.

Credit: David Cass
Jacoby Yarbro has some contrast vision but is legally blind

David is not only Jacoby's friend, but also his advocate as part of his kidney champion team.

"Since losing my sight I rely on a lot of friends like David, as well as his wife Cyndy, Sue Buckley who runs Club Vibes, some friends of mine, Ray and Pat Hinkle. I use them to help me with spreading the word and I have a few other folks that are part of my kidney champion team," Jacoby said.

Proactive efforts to find a living donor have mostly moved online. A transplant from a living donor provides greater longevity than one from a deceased donor.

Across the country, about 100,000 people are waiting for a kidney transplant.

Jacoby said,  "A lot of it has to do with faith for certain because I don't think that I would be able to be as positive as I am without it."

Credit: WBIR
Helen Ashe was one of the founders of the Love Kitchen

He credits his grandmother who raised him: Helen Ashe. She is well known in East Tennessee as one of the twin sisters who founded the Love Kitchen to feed the hungry.

"My grandmother always taught me that there is someone out there who is a lot worse off than you are," Jacoby said.

David said,  "Jacoby's got a wonderful heritage through his grandmother and what she gave to the community and Love Kitchen is still giving. I think people who think highly of the Love Kitchen and want to give back, even though Helen is gone now, you can give back now through support of the Kidney Foundation and Jacoby's efforts."

His ongoing efforts to find a kidney donor.

"I get a phone call, and my transplant center says, hey, we've got a kidney for you. We need you to come in in the next day or two for transplant, that's the best case scenario," Jacoby said.

Donating a kidney is not something people do lightly but check out these links for more information:

RELATED: Diabetes has claimed his kidneys and his sight but not his hope