It was the Walmart of its day and famous for its bologna and cheese sandwiches. Now, this little white store's dusty shelves are sparsely stocked with the rodent-chewed remains of its heyday. 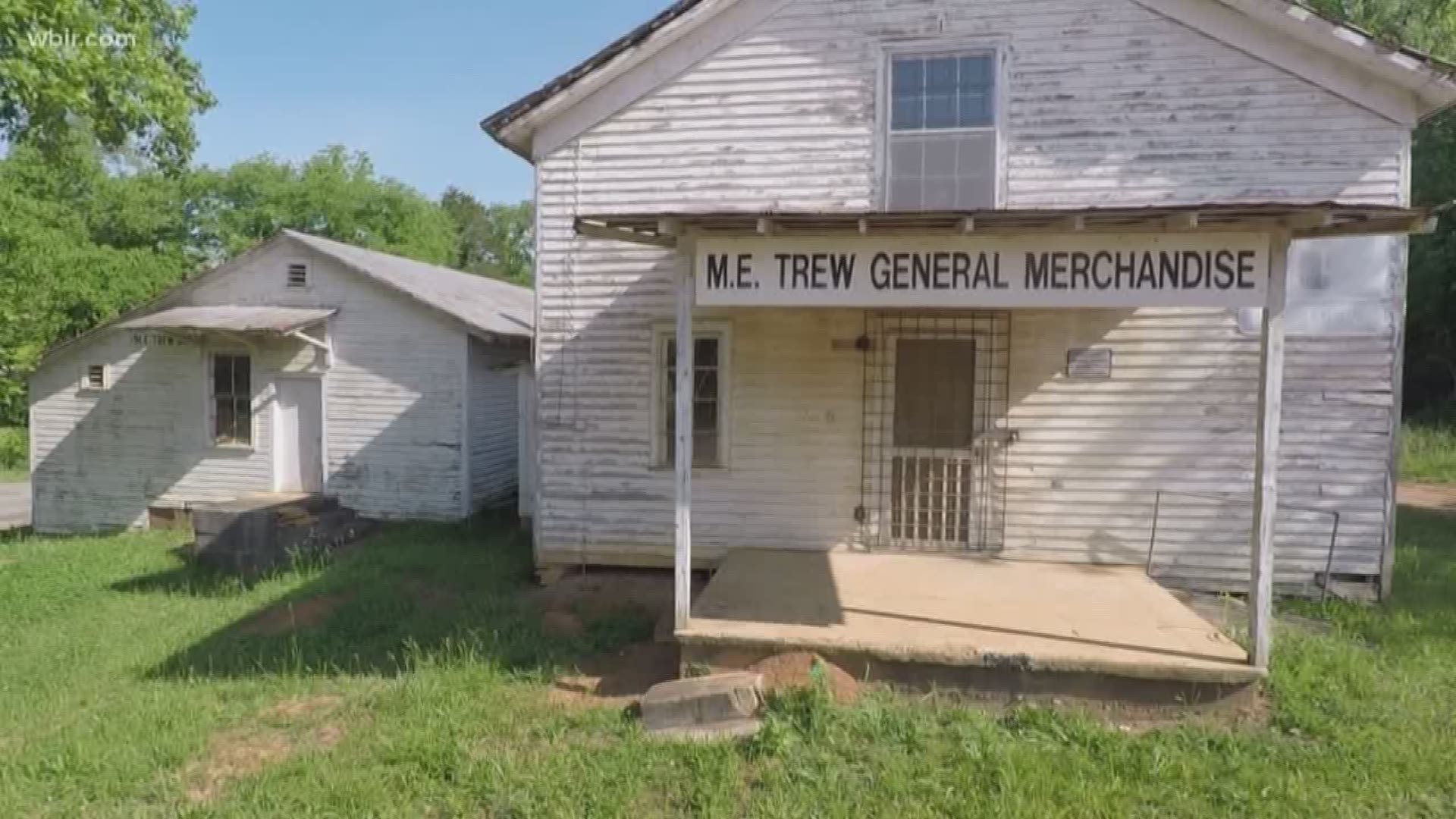 MCMINN COUNTY, Tenn. — To the average passerby, the little white buildings on State Route 163 between Delano and Calhoun are just rickety structures.

To locals, they are memories of freshly sliced bologna and cheese sandwiches and trips in mule-pulled cotton carts.

These two little buildings were originally just one called Trew’s Store in the middle of a sprawling farming community, established in 1890 by J.W. Trew to provide a trading post for people in the area.

In the early 1900s, the store also housed the local post office, making it a fixture of the community.

J.W. passed the store to his teenage children in the 1930s. It operated as Trew Brothers from 1962-1975 until J.W.’s son became the store’s sole owner. He renamed it M.E. Trew General Merchandise and constructed a larger building next door to accommodate the growing business, converting the original store into storage.

1 / 18
Elizabeth Sims
It was the Walmart of its day and famous for its bologna and cheese sandwiches. Now, the Trew's Store's dusty shelves are sparsely stocked with the rodent-chewed remains of its heyday.

Still a gathering place for locals, the Trew’s Store sold everything from farming equipment to shoes to groceries to medicine. All of which would be placed into pokes (the local term for brown paper bags).

“In its day, this was Walmart because they had everything,” said Fred Underdown, president of the McMinn County Historical Society.

Though the stocked shelves resembled modern merchandisers, the store’s business practices were tailored to the community it served. Farmers’ bills were kept on paper logs and were paid off once they sold their crops.

Mortimer Trew, whose father and mother ran the store together, said people would travel long distances because they trusted his parents.

“I can remember some people out at the mountains would come here and trade with Dad because they couldn’t count and they knew that they would always get fair, you know he’d give ‘em their change, whatever it was, so they were afraid to go other places,” Mortimer said.

Aside from general merchandise, kids growing up in the area knew the Trew’s store had an expansive candy counter and ice cream.

Watch the "Heartland" feature on the Trew's Store in 1994:

However, the store was most famous for its bologna and cheese sandwiches. Bill Bigham, a childhood friend of Mortimer and a historical society member, recalls watching the Trews slice the bologna and cheese from 40-pound hoops right in front of him.

“He’d put a piece of bologna on that cheese with maybe lettuce or something like that and people would buy it with a Coke,” Bigham said.

Underdown said teachers would even bring their classes to the Trew’s store on field trips so they could watch the sandwich slicing.

“They wrote stories to the Trews about their visit here and I think that’s a memory of a lot of young people in this county and it’s something that we do still miss today,” Underdown said.

Despite its popularity, the store eventually closed for good in 1996 after Mortimer’s father died on April 1 and his mother did not feel comfortable running the store on her own.

Once the store closed, decades of weather, animals and break-ins deteriorated the beloved buildings. Though dusty and worn, evidence of the store’s heyday remains, almost as if someone left one day intending to come back.

Rodent-chewed boxes of hair dye, nails and other products are still scattered on the shelves. Dusty jars of lollipops and gum still sit on the counters, waiting for little hands to reach in once again. Rusted farm equipment still hangs from the rafters. Glass bottles of Coke are tucked in various nooks and crannies. Weathered posters advertising products like JFG Instant Coffee and Gattis Worm Oil still cling to the walls. Even the famous hoop cheese, aged well past its prime, can still be found on the top shelves.

Despite being listed on the National Register of Historic Places since 1976, the treasured Trew’s Store remains untouched. Mortimer bought out his parents so he could keep the place where his father spent his life, but he does not have a plan for it.

“It’s not in my blood so it would be nice if somebody would really had a dream and could make it happen,” Mortimer said.

Regardless, those who tasted the Trews’ bologna and cheese sandwiches want to see the little white store’s legacy preserved.

“This building has been here for over 100 years. It’s part of us. It’s witnessed a lot of history in our county. And I’d hate to see it torn down. Restore it to some degree, I would love to see that happen,” Underdown said.