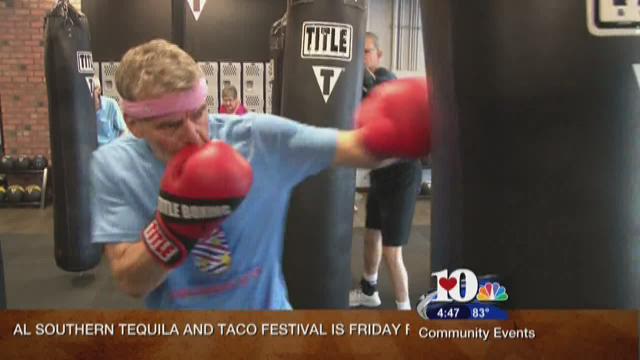 It's something that the actor Michael J. Fox drew attention to when he was diagnosed: Parkinson's Disease. More than one million Americans live with it including about 2,000 diagnosed in Knoxville.

A national fitness program has come to Knoxville that focuses on people with Parkinson's.

Personal trainer Zach Guza has a personal connection to Parkinson's Disease. His dad died three years ago from the illness.

"I saw how terrible that was, a long decay for him and from what I can tell he was told just sit back, it's never going to get better. That's just not true. You can fight back. You can get strong. And your body can influence how your brain works. So I'm in. We're fighting hard," Zach said.

"Doing things just like boxers would. The only difference is we don't hit each other. It's all non-contact," he explained.

The warm up is stretching and balance. Then the real workout begins.

"Not only is it physical where you're having to move around and and learn how to move and learn how to box better but you come together as a group. You realize you're not alone. And the caretakers do too. They realize that they're not the only ones out there," he said.

Boxing student Alan Zimmerman recalled, "I found out June 14 of 2014. The doctor says 'you've got Parkinson's Disease. Come back and see me in four months.' I said to myself, 'self, now what.'"

Alan became an advocate, read everything he could find, joined support groups, and found ways to keep fit.

He walks on a treadmill and now he boxes.

"They started this program. This is a great exercise as you probably noticed and actually exercise is the only thing that's been proven to be neuro protective at all," he said.

Zach said, "We've only been having classes for about a month and I am already seeing people standing up taller and reaching better and saying they're feeling better. They want to come. They keep coming back."

The students are in different stages of Parkinson's, some diagnosed recently, some years ago.

Alan said, "Everybody has their good days and their bad days. Some of the people are doing much better."

That includes Thaddeus George. The 54 year old could barely stand a month ago and now he hits the bag with steady punches.

"This can be a very isolating disease to come in and see people working hard and being in the same boat... it's great," Zach said.

Zach thinks the class can make a bad situation better for Parkinson's patients and wishes his father could have participated.