Pimento the donkey continues to grow at East Tennessee rescue

Rescuers and veterinarians weren't sure Pimento would survive. That's when local farmers gave him the life-saving gift of goat milk. 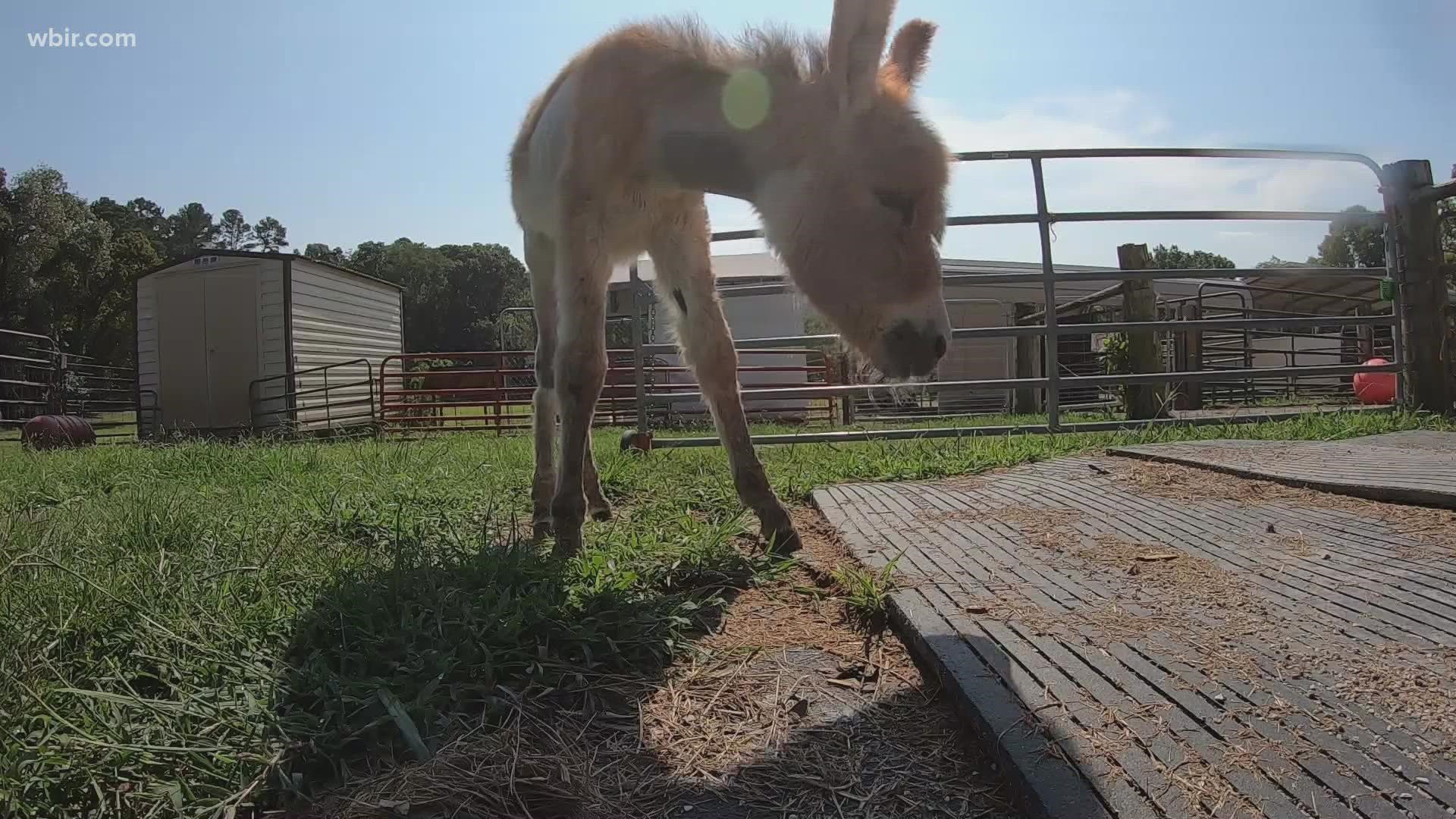 It has been nearly three weeks since we first met Pimento the donkey. He was staying at the University of Tennessee's large animal hospital because he was sick, unable to stand up on his own and drinking donated goat milk to help him recover.

Since then, he was able to return to East Tennessee Mini Horse and Donkey Rescue in Loudon and has continued to grow!

Pimento has filled out, and he is able to get up on his own, especially to chase the barn cats. Angela Devine, the rescue's director, said his personality continues to shine.

He can still be unsteady on his feet at times, and they've had to change out some of his medicines to help him heal. His caregivers think this comes from a combination of the neurological issues UT's veterinarians found and a leg injury. Devine said his mother might have stepped on him before he came to the rescue.

"We're really hoping he just continues to improve. He does obviously have a long road ahead of him, but he's got so many people pulling for him. We think he's got a really good chance," Devine said.

Devine said it's important for Pimento to be steady on his feet because they expect him to grow into a large adult donkey and will be challenging to help up.

For now, volunteers will continue to stay with him 24/7 to make sure he gets the care he needs as he grows, and local farms are still donating gallons of goat milk to keep him fed.

"Our goal is that he will become a healthy, strong little boy and find a really good home," Devine said. "If he does end up with some physical disabilities that aren't putting his quality of life in jeopardy, but he's not adoptable, we do have a sanctuary program. So one way or another, he's going to be in a good home."

East Tennessee Mini Horse and Donkey Rescue celebrated its fifth anniversary on Aug. 10 with Pimento being its 414th rescue.

To find out more about the rescue and ways to help horses and donkeys like Pimento, visit its Facebook page.

When East Tennessee Miniature Horse and Donkey Rescue brought in Pimento the baby donkey, they were not sure he would survive.

Angela Devine, the rescue's director, said they took in the sick foal on July 22 when he was just days old.

"He probably hadn't eaten for quite a while. His mom's milk was pretty much dried up and he was lucky to be alive," Devine said.

He was taken to the University of Tennessee's large animal hospital.

He was having trouble standing up without assistance and showing little sign of improving after a few days of care. Devine said his vets determined he had a neurological issue.

Pimento was also on a nasal feeding tube after refusing to drink the replacement formula. Devine said UT tried giving him goat milk and he loved it.

The only catch was that they did not have enough in stock to get him through the next day.

Devine put out a message on Facebook asking any goat or dairy farmers for help to keep Pimento fed. One of the rescue's adopted families shared Devine's post with their community.

Devine said Pimento loves the goat's milk so much he is now "milk drunk" and was caught cuddling his teddy after one of his feedings.

"We didn't know any of these people. I don't know if they even knew each other," she said. "They are coordinating amongst themselves on collecting more milk and getting it together so that we can have another big load to go ahead and freeze so that as he grows, we have a constant supply. It's just been absolutely amazing."

Dr. Karen McCormick, UT Equine Veterinarian, said Pimento had two major hurdles to clear. He needed to eat on his own and be able to stand up without help.

He is now eating on his own but still needs a little help standing up. However, once he is on his feet, he is full of life, walks on his own and even plays around a little.

"His personality has really started to shine through in the past couple of days. He really does try to play. I mean he thinks we're his moms. He loves people," McCormick said.

The rescue and Pimento's vets are hopeful he will make a full recovery.

As East Tennessee Miniature Horse and Donkey Rescue comes up on its fifth anniversary in August, Devine said Pimento is its 414th rescued animal.