Gibran Cuevas is a father to two adopted sons, a grandfather, a caretaker for five animals, a military veteran, a retired police officer and a transgender man. 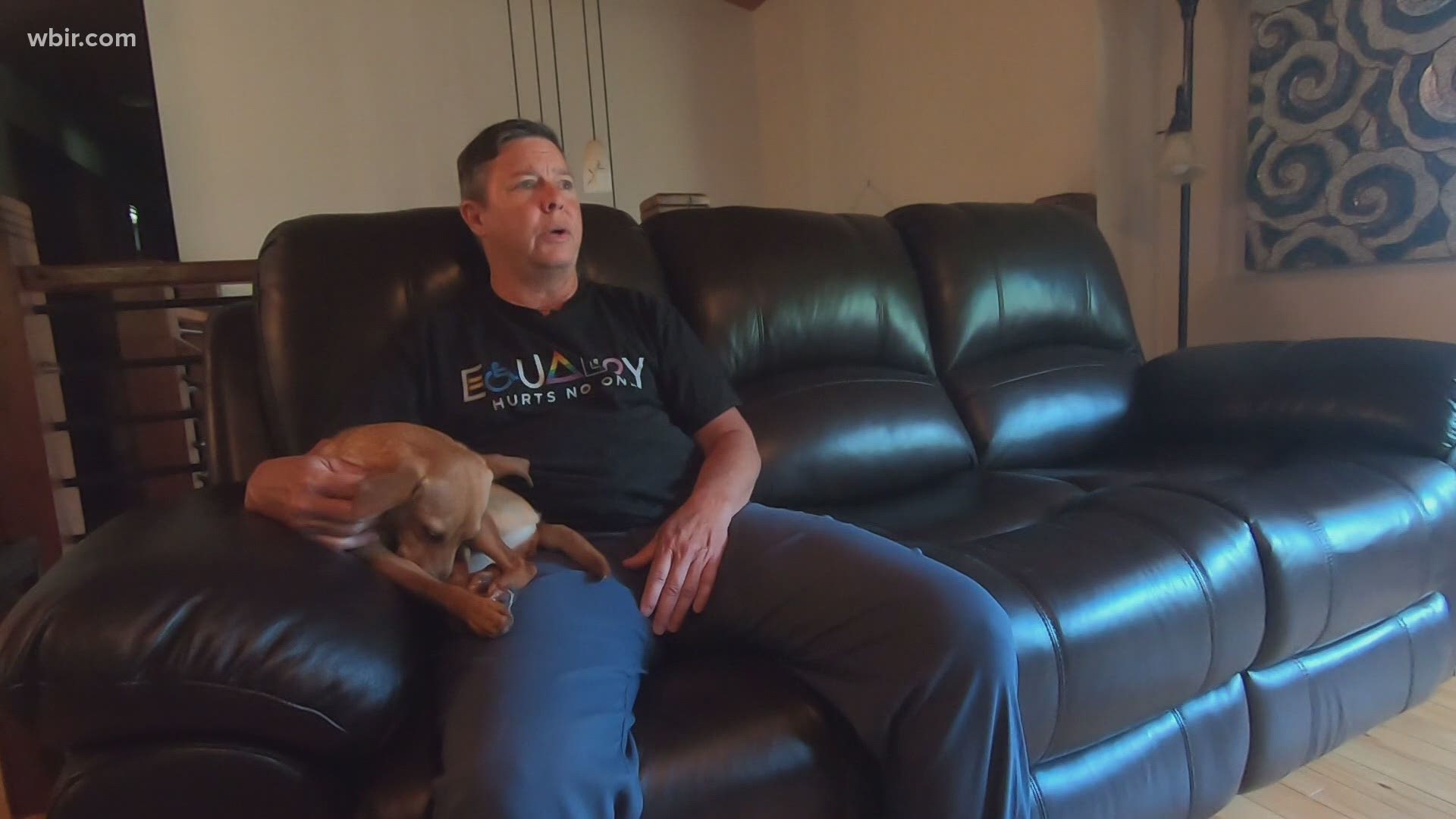 SEVIERVILLE, Tenn. — Everybody has layers that shape who they were, are and strive to be. Gibran Cuevas is no different. He is a father to two adopted sons, a grandfather, a caretaker for five animals, a military veteran, a retired police officer and a transgender man.

Cuevas spent his teenage years in the army as a military police officer and K-9 handler. After that, he enrolled in the Miami Police Department as a detective for the department's narcotics and special victims unit.

He spent more than 30 years serving in the military, all while keeping a secret about his sexuality and gender.

Cuevas is a man who was assigned female at birth. And little by little, he said people started to discover he did not identify as straight and cisgender. But through the 1980s, people in the military could face a dishonorable discharge if they were gay.

It was a battle many people who identified as gay, lesbian and transgender had to deal with.

"Predominantly my whole life, in order to succeed, I had to lie for self-preservation," he said.

Cuevas kept his secret until he was a respected member of the Miami Police Department. He started by telling his family and closest colleagues. After he retired and secured his pension from the police department, Cuevas began the process of transitioning from female to male.

"I knew I was transgender. It scared me to death," Cuevas said.

However, the process of legally changing a person's gender assigned to them at birth is difficult. Anyone who fully transitions must invest in medication and surgeries to go through a gender change. Additionally, many choose to undergo a change of clothing along with a legal name change. A name change alone can cost around $250.

"It feels like a whole other lifetime," Cuevas said, looking at old photos of himself as a woman.

The financial costs of changing genders can be enough to cause some transgender people to continue living in secret. However, Cuevas also described a heavy social cost.

"My friends know, my family knows ... and my family has been very very supportive. My children have been amazing," Cuevas said, "And, I have some friends that still remain my friends. Of course, I have lost some. But, the ones that are meant to be are still here."

After Cuevas transitioned, he traveled across the U.S. in an RV, hiking through national parks and spending time in nature. However, his days spent on the road eventually came to an end. He fell in love with the Great Smoky Mountains 3 years ago and decided to make it his home.

"When I got here there was nothing. No resources for LGBTQ+ people," Cuevas said.

He pointed out the resources available in Knoxville; however, Sevierville is an hour away from the city. It could be difficult to access resources from there.

Cuevas set his mind on finding and establishing an LGBTQ+ organization a little closer to his rural home.

"If there's not an organization, then we need to create one," Cuevas said.

He worked with Shannon Brown, a licensed therapist, to launch an Appalachian OUTreach. The organization focuses on reaching LGBTQ+ community members by offering them resources such as support groups, events and activities.

One of the activities that the group organizes, led by Cuevas, is a hiking group that meets once a month. He said the purpose of the group is exploration — both in terms of the surrounding trails and meaningful connections.

"They say they want to know someone who is out there making it, and not hiding themselves," Cuevas said.

Now, he said he is serving as a role model for members of the LGBTQ+ community.

"That's why I do it," Cuevas said, "I want to create a safe space for people to love themselves and be okay with it."

Through his time working with the Appalachian OUTreach, Cuevas has watched many people come to terms with their sexuality. He finds comfort in knowing they felt safe with the organization.

"These children see other people, know that they're safe, and can be able to express themselves," Cuevas said, "It's heart-wrenching to know that they didn't have that here before."

Although Cuevas takes pride in his contributions to Appalachian OUTreach, he knows there is still a lot of feedback that makes it difficult for many people to come to terms with their sexuality in East Tennessee.

Some people who are transgender say that peeling back the layers of discrimination is potentially the most difficult part of embracing their identities.

Even after battles in the military, fighting crime in Miami and raising two sons as a single parent — Cuevas admitted it took tremendous courage to come out.

"I am a human being, so treat me like a human being. I am not getting any special privileges, just let me live," he said. "I am not doing anything wrong to anybody."