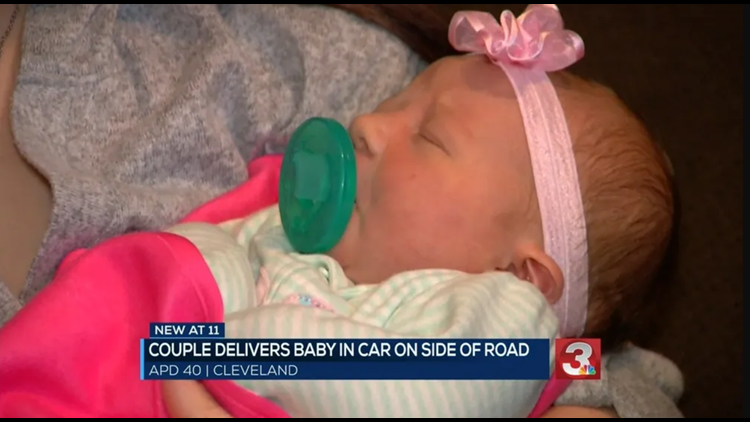 Photo by: WRCB
Caitlin Davis welcomed her fifth child into the world on the side of APD 40 in Cleveland. The father, John Monds, delivering their little girl, Lillian.

'SHE'S COMING OUT': Cleveland couple delivers baby in car on the side of the road

A mom in Cleveland, Tennessee welcomed her fifth child into the world a little differently than the first four. Caitlin Davis couldn't make it to the hospital so she delivered her little girl in the car on the side of the road.

Davis thought it was a normal day; she wasn't supposed to be induced for two more days. She suddenly got severe contractions and the next thing you know they're on the phone with 911 on their way to the hospital.

That is from the 911 call on Tuesday night just moments before Caitlin Davis and John Monds welcomed their fifth child, Lillian, into the world.

It was anything but calm, up to that point.

Davis said, "We didn't get but five minutes down the road before we had to pull over because she had started coming out.”

"I put my hand over and I felt the baby's head and that's when I knew I had to get her out because she was already on her way,” said the father, John Monds.

Monds quickly got off the road at the Applegate Inn on APD 40 in Cleveland.

"I cut like three or four people off getting to the side of the road,” said Monds.

Then the dad played doctor.

"I flipped the seat back and when the seat fell back, it's like the baby just shot out,” Monds said.

The mom says it was her most painful birth.

"I'm pretty sure I pulled muscles, in my back and right here, because I was holding onto the back of the seat, like the head rest, because I was hurting so bad,” Davis said.

The ambulance arrived shortly after and paramedic Zach Jaggers came to the rescue.

"When he came to the car, it was like he calmed everything,” Monds said.

Jaggers says he was just happy to help.

"Most of the time when someone calls 911 they're having the worst day of their life, you know somebody's leaving the world, and it's not very often that we get to a experience a miracle like child birth out in the field,” Jaggers told us.

Both sides are grateful for the other, but the dad says never again.

"It would have been one-and-done if that was the first because that was pretty emotional,” said Monds.

The mom said both she and baby Lillian, and everyone involved are doing just fine.

The dad calls his newest baby their "Little Highway Girl."