Sweeter Than Honey | An afternoon with Tennessee’s tiniest beekeepers

At an age when most kids would run screaming away from bees, brothers Hank and Gus Burgin are zipping up their bee suits. 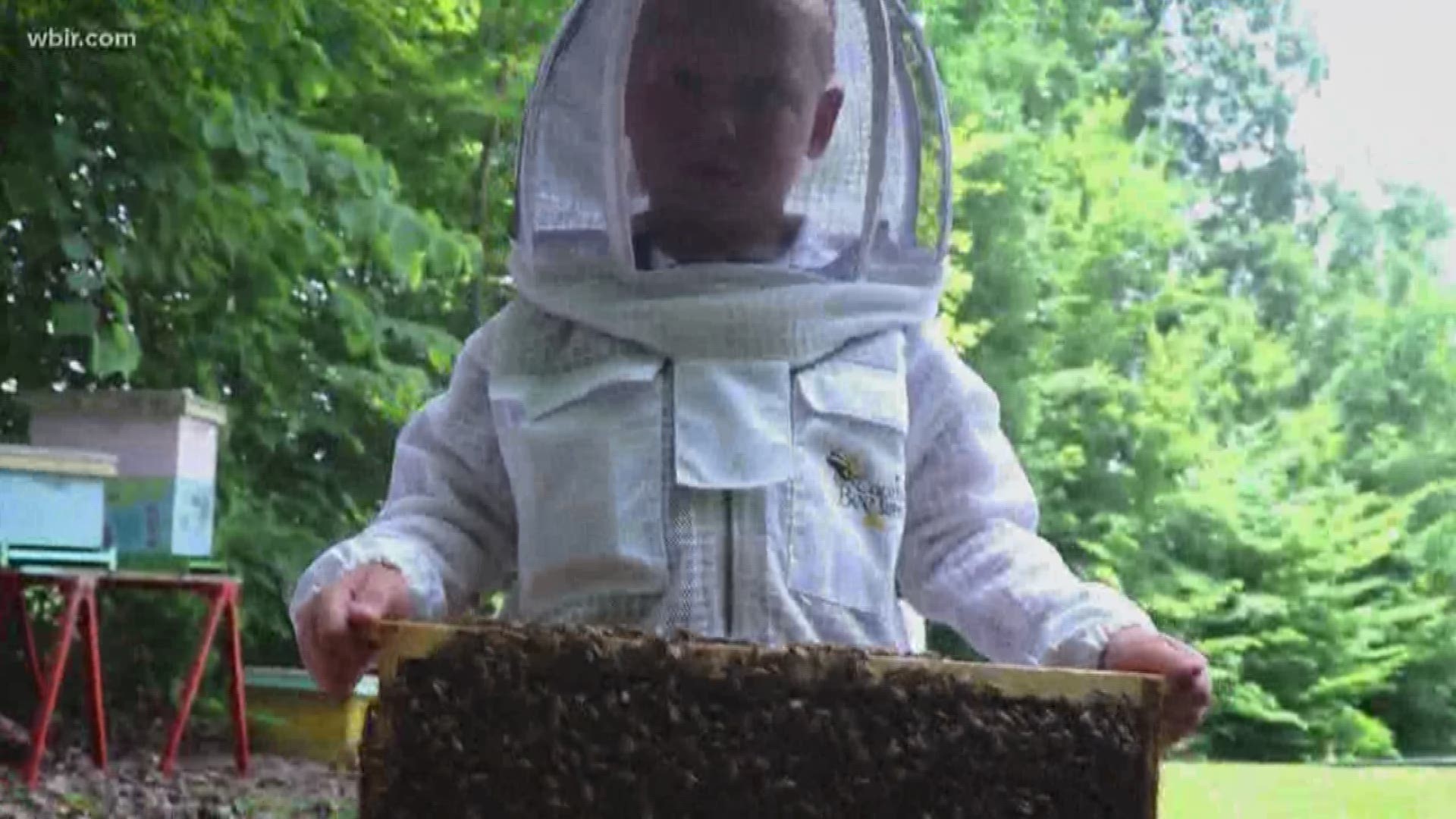 STRAWBERRY PLAINS, Tenn. — The Burgin brother’s backyard is punctuated with all the requisite fixtures of a happy childhood. There’s the playset with swings and shovels stuck in the sandbox. There are balls you can kick and things on three wheels to ride and enough space to run or tackle your brother into the ground if necessary.

And, tucked along the edge of the woods, is the sound of a hundred cacophonous bees that live inside the hives along their yard's perimeter.

“Can you smell that?” asks the oldest brother Hank. “It’s honey.”

At an age when most kids run shrieking from the stinging insects, the Burgin brothers suit up for a closer look.

“They’re like pets,” said Hank, who is five and begins first grade at summer’s end. “You know how you have a dog or a cat? You can have bees too.”

The Burgins were born with beekeeping in their blood. Their dad, Brent, had a great-grandfather and aunt who kept bees. So three years ago, Brent and Brittany Burgin decided to integrate this cool family tradition into their own lives.

“It’s nice to carry on something like this that your family has done,” said their mother and fellow beekeeper Brittany Burgin.

But as the routine of caring for bees made their way into daily life, so too did Hank’s curiosity.

The beekeeping suits weren’t much of a choice.

“[Hank] was in the middle of the bees and we were like okay, it’s time to get a bee suit,” said Brittany.

Credit: Madison Stacey
Hank, 5, and Gus, 3, take a break from their beekeeping duties.

Hank can’t multiply numbers yet and, at three years old, his younger brother Gus can’t read.  In fact, Gus wasn’t even born when the family first took up beekeeping.

But both brothers make easy sense of the hives’ chaos. 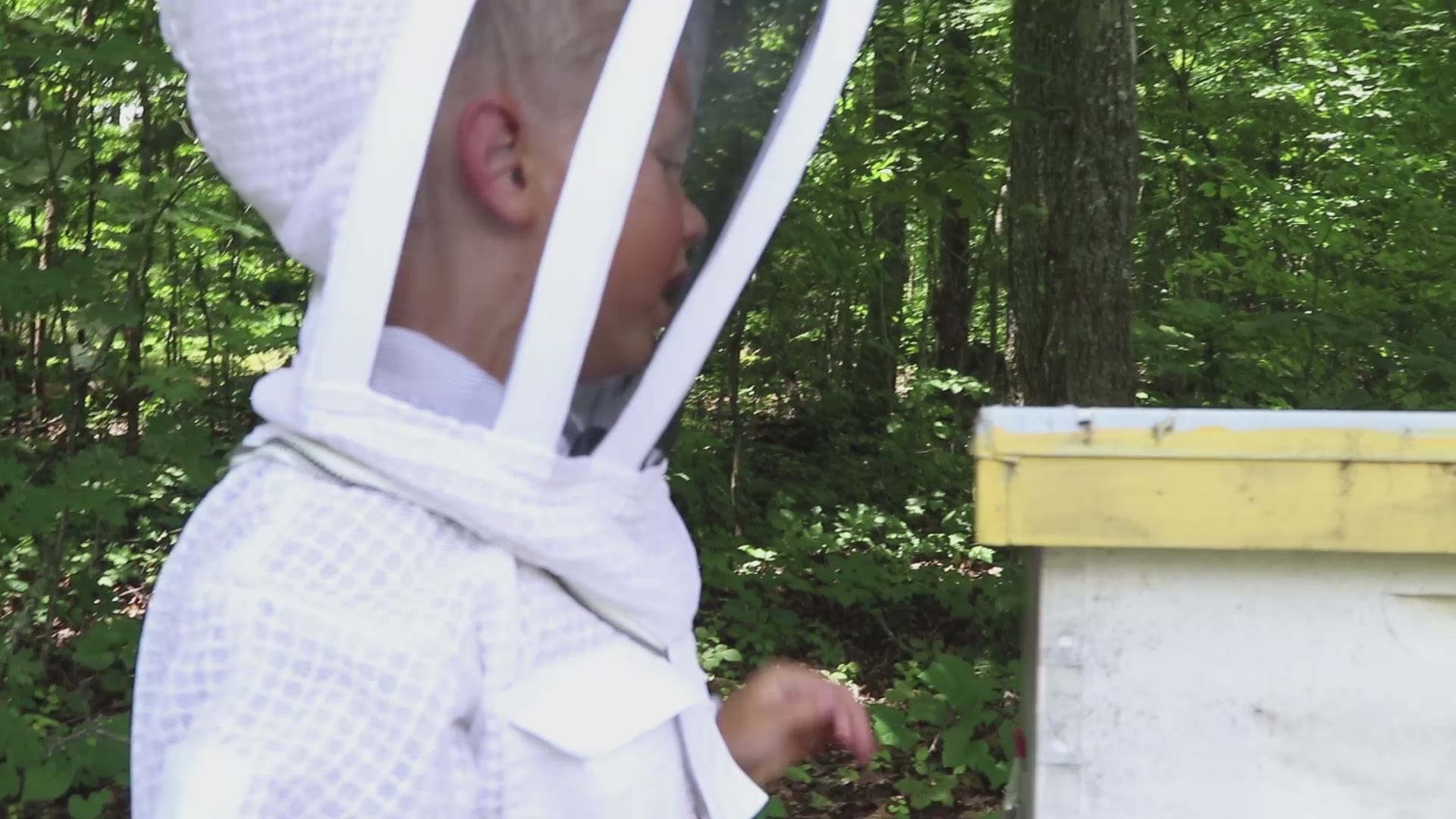 Brent brings the smoker up to a hive, subduing the bees so Hank can hold up a panel. As he explains bees’ intricate social system, his tiny gloveless hands move up and down the frame where hundreds of bees now swarm into slumber.

“The drones makes the females work hard and they don’t work that hard,” he said. “They just keep the queen safe from other predators.”

Fun facts, whether he’s suited up or no, abound. Hank knows all about pollen and honeycombs, the difference between drones and workers, or how bees consider the mystery of our ears.

Credit: Madison Stacey
Brent Bergin prepares to take out one of the bee frames.

“You know why bears are predators to bees?” he asked, earnest and non-rhetorical. “Because they steal honey. And if you hear them buzzing around your ears be careful: they think it’s a hive.”

He brought that wealth of first-hand knowledge to his fellow group of kindergarteners for show and tell last year.

“His classmates have actually grown to love bees just as much as him,” Brittany said. 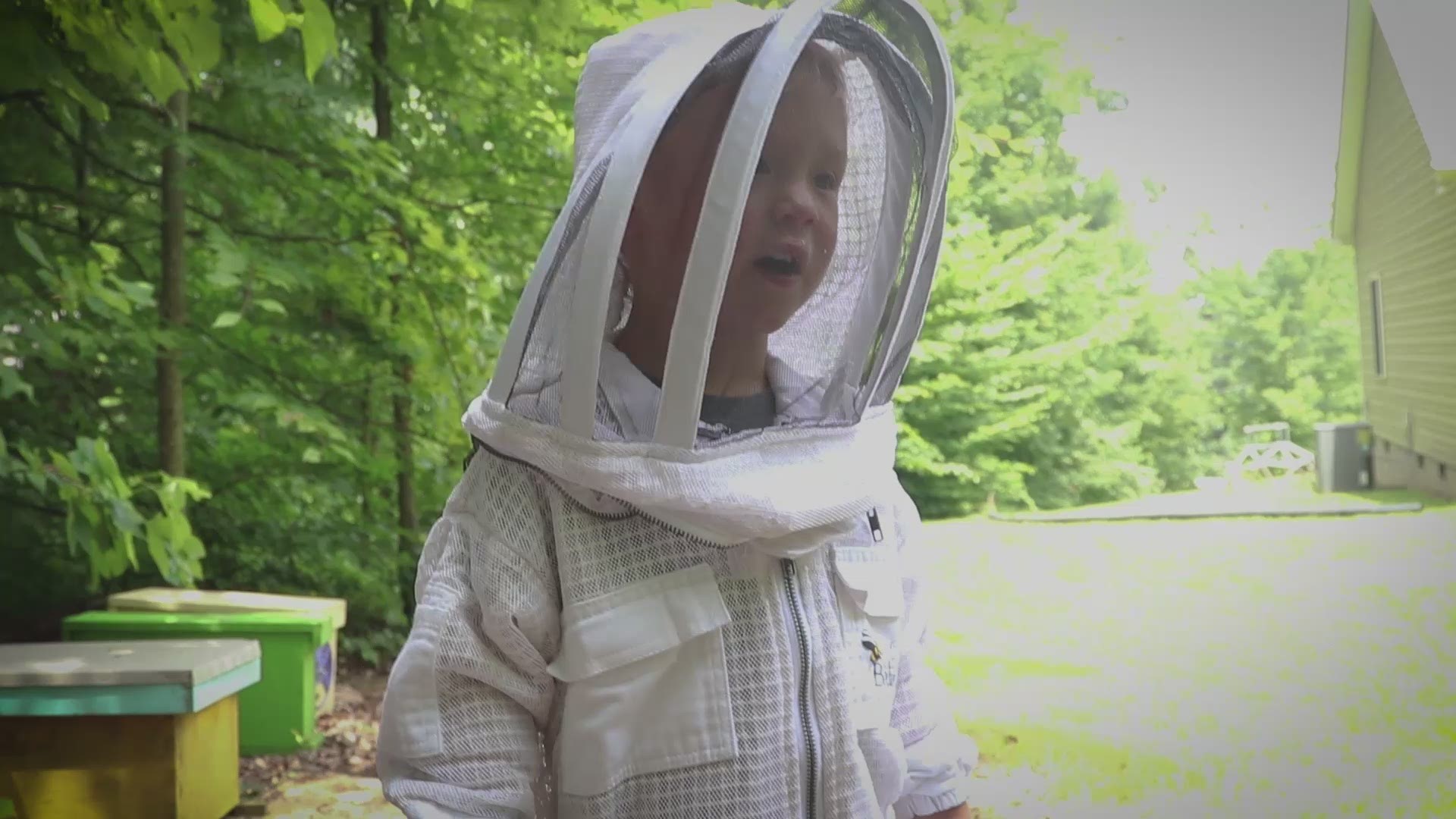 The boys hardly prepare to smoke out bees and stick their hands into their hives alone. Their parents are always suited up alongside them to offer words of encouragement or caution.

Protective suits aside, sometimes the boys do get stung. Gus is especially wary of bee stings. But their parents don’t want stings to get in the way of the bees’ simple beauty.

“There are risks to beekeeping, but we want our kids to get out,” said Brittany. “We want them to see that yes, bees can be harmful but that they’re okay to be around. We don’t try to shelter them from all the bad things.”

At his tender age, Hank already understands the creatures’ fragility. He motions to the queen bee and his next fact isn’t as fun.

Many queens like the one Hank pointed out are dying. While scientists think the species may actually be experiencing a comeback after a harsh decline in the mid-2000s, they still face threats from pesticides, climate change and habitat destruction, according to the United States Department of Agriculture.

In the process, ‘Save the Bees’ has become a sort of rallying cry for people wanting to evoke change.

Amid those sometimes tense conversations, Brittany said it’s important that her boys understand they can have a tangible role in making things better.

“Whether it’s beekeeping or not,” Brittany said, “we try to teach them is to make a difference in the world when there’s so much negative things going on.”

“They’re gentle, but you should stay behind me because I’m the one with the bee suit on.”

Aside from curating pictures of the family’s daily bee grind to an Instagram following of about 1,340 followers on the account Two Bees Honey, The Burgins don’t sell their honey on a wide scale. Mostly, they tend to the bees and shlep off gallons of the stuff to grateful family members.

For them, the blessing of bees transcends the monetary.

“A lot of people don’t know how important they really are so it’s nice to see them carry on something like this,” said Brittany. “Just to know to do something to make a positive change in the world, whether it be beekeeping or not.”

As the last remnants of smoke fade and the hum of bees signals their reawakening, Hank turns away from the smoker to a colorful hive.  It’s chipped on the side, but he runs his hands along the sides where two names are painted: Hank and Gus.

Hank takes a few steps and turns away from the bees for a moment. Little brother screaming in tow, they run, tumbling happily together back to the slide, the sandbox, the swings.

RELATED: Last winter saw more honeybees die off than ever before, survey reveals