Mother calls for change after security wouldn't let her fly with days worth of breast milk, causing it to spoil

"Breastmilk is not a commodity. It is not a luxury. It is a necessity," she said. 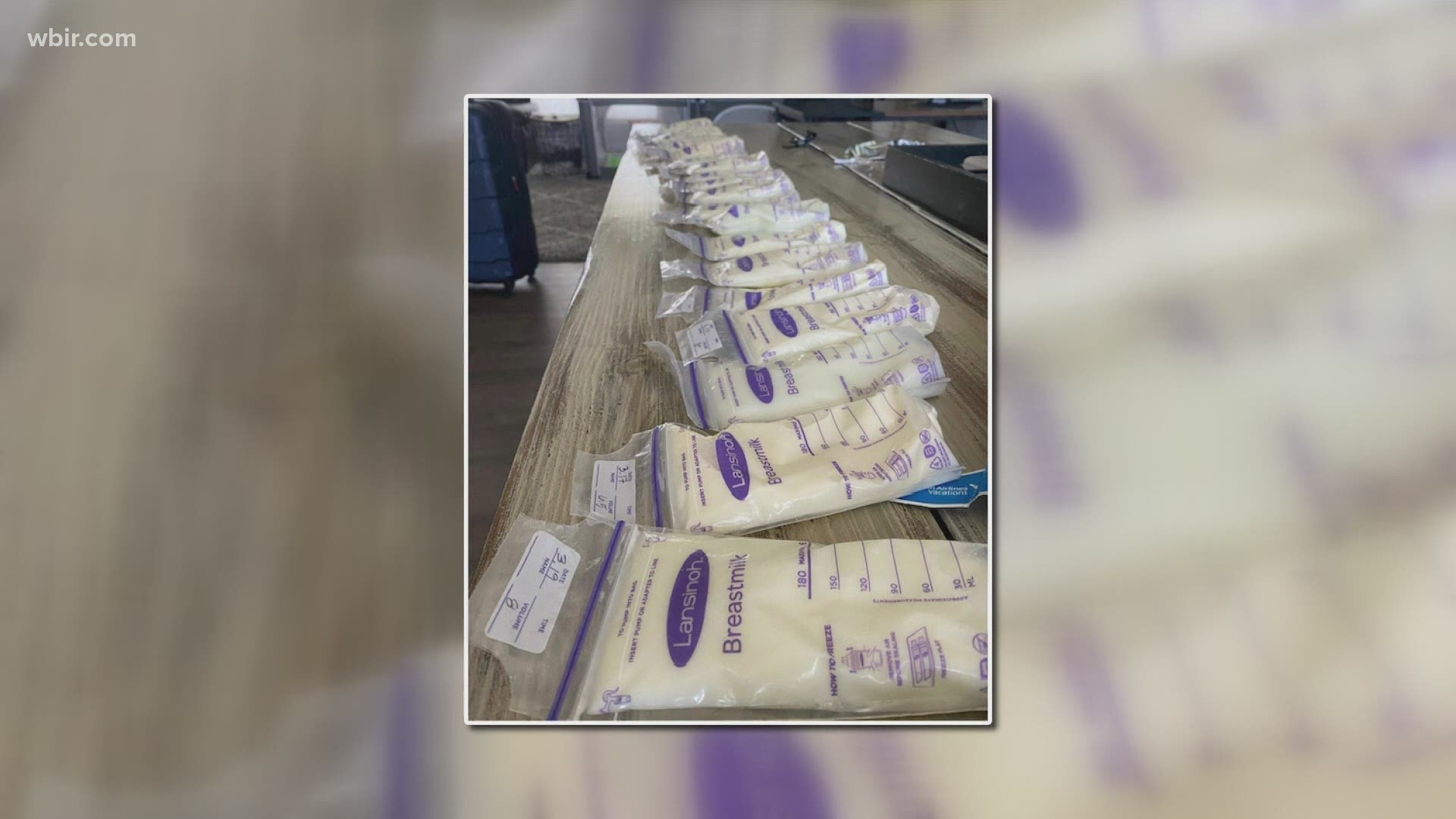 KNOXVILLE, Tenn. — Breastmilk is called liquid gold for a reason.

The nutritional properties and immunities passed from mom to baby are important especially in a pandemic.

So moms, what would you do if you had to throw more than 140 ounces of breast milk in the trash?

One Knoxville mom was forced to do just that during a recent trip to Cabo San Lucas, Mexico and it made her sick to her stomach.

Sarah Morrow is one tough mom. She makes running a business out of her home while raising her two sons, 4-year-old Koa and 9-month-old Kai, look easy.

When she and her husband got invited to a wedding in Cabo, she was looking forward to a vacation.

“It's just one of those things that's been on our calendar for almost a year that's given us excitement,” said Morrow.

She enjoyed the opportunity to escape, but she knew she couldn't escape her job as mom.

“Hey guys I'm sorry I've got to leave the beach because I’m engorged and I need to go pump,” said Morrow.

Every three hours, four to five times a day, Morrow had to stop what she was doing and pump breastmilk for her baby. This would help replenish the reserve she had built up for months to prepare for her trip.

“I was just super proud of myself, too, because I pumped for over ten hours,” said Morrow.

She said the burden was worth it.

“It's one of those sacrifices that you just dig your head down and you do it,” said Morrow.

She even made arrangements with the hotel to make sure the breast milk was stored safely.

“At the end of the day, room service would come and have gloves on, take my milk and go put it in the freezer, lay it flat for me,” said Morrow.

Morrow ended up with 145 ounces of breastmilk, which is more than a gallon of milk. She had previously researched protocols for traveling with breastmilk online and did everything according to TSA guidelines, which she soon learned are different than the guidelines in Mexico. She packed all 25 bags of frozen milk on ice in a cooler and headed to the airport, but when she was going through Mexico's airport security, she was met with resistance.

“She said, ‘No you can't bring that,’ and I started instantly crying because there is such anxiety women have when traveling with their breast milk,” said Morrow. “She said if I had a child with me I could bring it in a three ounce bag.”

Morrow was forced to check her cooler with American Airlines.

“I, at least, was hoping for, ‘Hey, maybe we can ship this for you overnight?’ There was no solution. It was very cold,” she said.

Morrow said she wishes American Airlines would have been more of an advocate for her and her breast milk.

When they landed in Dallas, there was a delay on the tarmac and it caused her to miss her connection and stay the night in Dallas.

“At this point it was like okay, let's troubleshoot how to get my milk,” said Morrow.

She said the American Airlines gate attendant told her the bag was on its way to Knoxville.

The cooler wasn't there. It was still in Dallas.

Morrow said one of the biggest grievances she had with the airlines was, “The lack of a sense of urgency and lack of accountability in ascertaining where exactly my breast milk bag was, which would have avoided it spoiling had they done their due diligence in locating my bag rather than being dismissive of me at the gate."

She finally got the bag when she landed the next day in Knoxville.

Now Morrow wants change, saying she wants to see airlines allow breast milk in carry-ons, regardless of if the child is present to prevent something like this from happening to other mothers.

“My main goal would be to advocate for people to be able to carry breastmilk because it’s an essential nutrient without absurd or ambiguous restrictions because it’s that important,” she said.

We reached out to American Airlines and their media relations department sent us this:

"We are sorry to hear that the customer's bag was rerouted and we're looking into the circumstances internally. A member of our customer relations team has reached out to the customer to learn more about their experience."

"I know that losing all of that milk and going through all of that last night and this morning was for a bigger purpose," she said.

Morrow said American Airlines did contact her.  She said they offered her a $200 voucher and she turned it down.