How do you top a year on the road with Rascal Flatts? 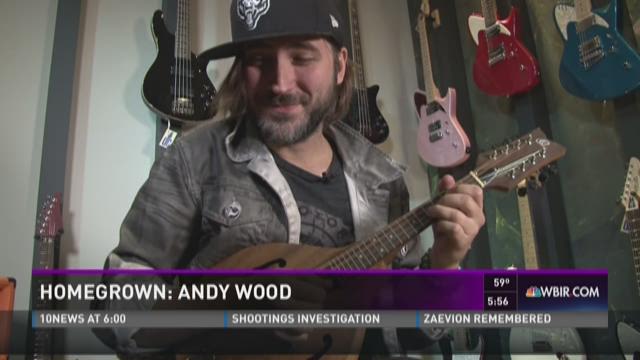 How do you top a year on the road with Rascal Flatts?

Those are just a few of the 2015 highlights for Andy Wood. He’s a guitarist, mandolin master and a solo artist.

Wood speaks with wonder about standing on Shields-Watkins Field at Neyland Stadium this year.

“To get to go out there and stand on the 50-yard line, I was stoked,” he said, describing his halftime performance. “It was one of the best gigs anybody could ever ask for.”

Wood's musical dreams are playing out even better than he imagined.

He started strumming chords at age 4.

“My granddad got me and my cousin started. We grew up playing fiddle tunes."

Andy Wood's album is called Caught Between the Truth and a Lie.

Woods didn’t discover the electric guitar until he was 17.

“I was a mandolin player. I wanted to be Sam Bush when I grew up. All my heroes are guys nobody's ever heard of.”

He fine-tuned his talents on Pigeon Forge stages in high school and college.

“So, I had really understanding teachers and a principal who would let me sneak out a little early to go play a matinee show.”

At the University of Tennessee, he began to study jazz and showcase his diverse skills on the club scene.

“I had a rock band through my 20s called ‘Down from Up,’ and we toured all over the country in a van.”

His first solo album got attention on myspace.

“It kind of got some love from some industry guitarists. I was kind of like an underground guy.”

And the backup gigs and tours began.

For the last year, Wood has toured the country as a guitarist and mandolin player for country music’s Rascal Flatts.

“They've got the greatest fan base. It's awesome to go out there every night and play for 10,000 people who know every word to every song. It was the best year of my life.”

Topped off by a performance at Neyland Stadium with the Pride of the Southland Marching Band.

“The Pride of the Southland is just as legendary as the football program, and they’ve got one of the most iconic fight songs of all time. It was - not to be cliche - but a dream come true. I love UT and I love UT football and to go out there and do what I love to do and be apart of it was awesome!”

Wood is also focusing on his solo career as a fusion artist blending bluegrass, jazz and rock. His newest album reflects his unique sound.

“My album is 24 songs. One side is all acoustic, singer-songwriter, bluegrass. The other side is all electric- more fusion instrumental stuff."

And, it’s true to his roots.

“I like the mountains and the lakes and I like the South. I'm definitely a southern boy.”

You can catch Andy Wood on stage in Nashville, Asheville and at the Bijou this February in Knoxville.