A Middle Tennessee bat company is a major player in baseball.  Old Hickory Bats stepped up to the plate in 1999 and hasn't struck out.  The company's roster includes hundreds of pros, amateurs, even pint sized players. 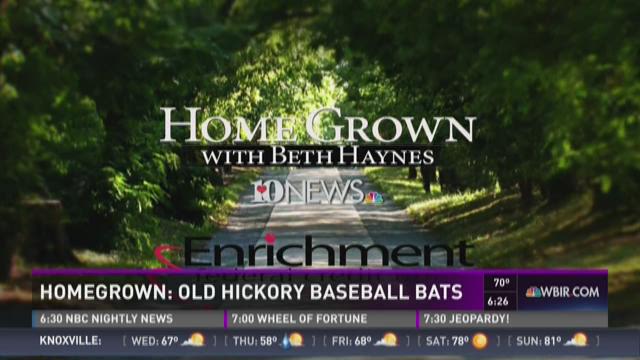 From the batting cage to the big leagues, Old Hickory has taken a home-run swing at the baseball business.

And, it’s big business sharing the field with heavy hitter Louisville Slugger and dozens of other bat companies.

“We feel like we make one of the best bats out there,” adds Co-owner Chad Lamberth.

Old Hickory carves out 45,000 bats a year, mainly out of maple. However, the bat company still operates with the same, small business mentality that begin in a one car wooden garage in Goodlettsville, Tennessee in 1999.

Lamberth had the space.

“I never was a huge baseball player or fan,” admits Lamberth.

And, Old Hickory Bats co-owner Jon Moyer had the know-how.

“I had never done woodworking before and Jon taught me.”

“Hickory is a very hard wood and very dense,” explains Lamberth. “That’s what they used to make bats out of and it just had a good ring to it.”

That first year, the stats were meager.

And then, they ran into Travis Copley at a batting cage.

“I’m a Vol. I played at Tennessee 95-98,” says Copley. “I finished up there and was drafted by the Reds and played 6 years of minor league ball.”

“He was the first ball player ever to use our bats and first employee we ever hired,” adds Lamberth.

“We got our first bat in the majors in August 2000. David Segui was the first,” says Lamberth. “I was excited! I was tuning in to ESPN every night.”

“Mike Trout, Paul Goldschmidt, Lorenzo Cain, now Trevor Story who's made his debut with a big splash with the Rockies... all those guys drive bat business for us,” says Travis.

The company is still using the same 4 day process which starts with a 36 by 3 inch piece of wood. Each bat is custom made- cut, hand sanded.

Then, the bat is finished and engraved.

“We think each bat could be the next one to hit a home-run,” says Lamberth. “It’s amazing that we’ve come so far. Yes, I am a baseball fan now!”