Tennessee native moves on in NBC's "The Voice"

Tennessee native Nolan Neal moved on to the next round of NBC's "The Voice" after winning his battle round on the hit music competition Monday. 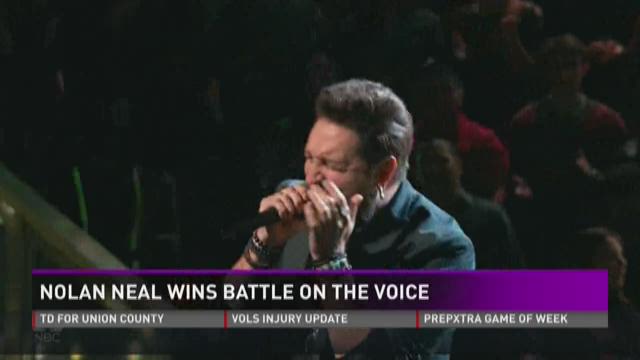 Tennessee native Nolan Neal moved on to the next round of NBC's "The Voice" after winning his battle round on the hit music competition Monday.

The singer went up against fellow Team Adam member Johnny Rez in a performance of "Sledgehammer."

Judge Blake Shelton said he thought the two were "a very well-matched battle."

Judge Adam Levine said it was a hard choice to decide which singer would move on. He said he was choosing, "the person I feel the most connected to as far as what I think I can offer them," before announcing the winner was Neal.

"I'm excited to be able to show more of myself as an artist," Neal said after his win.

Neal may be living large in Los Angeles as he continues to fight for a prime spot in "The Voice," but the Tennessee native calls Nashville his true home.

Neal also spent part of his childhood in East Tennessee. He attended school in both Nashville and Dandridge.

Neal was picked up by Maroon 5 member Levine.

New episodes of "The Voice" air Mondays and Tuesdays at 8 p.m. on WBIR Channel 10.