'This is the marijuana capital of Idaho': Pot sales bring cash infusion to Ontario

Marijuana is big business in the eastern Oregon town, where taxes on pot sales are projected to bring in more than $1.1 million a year. 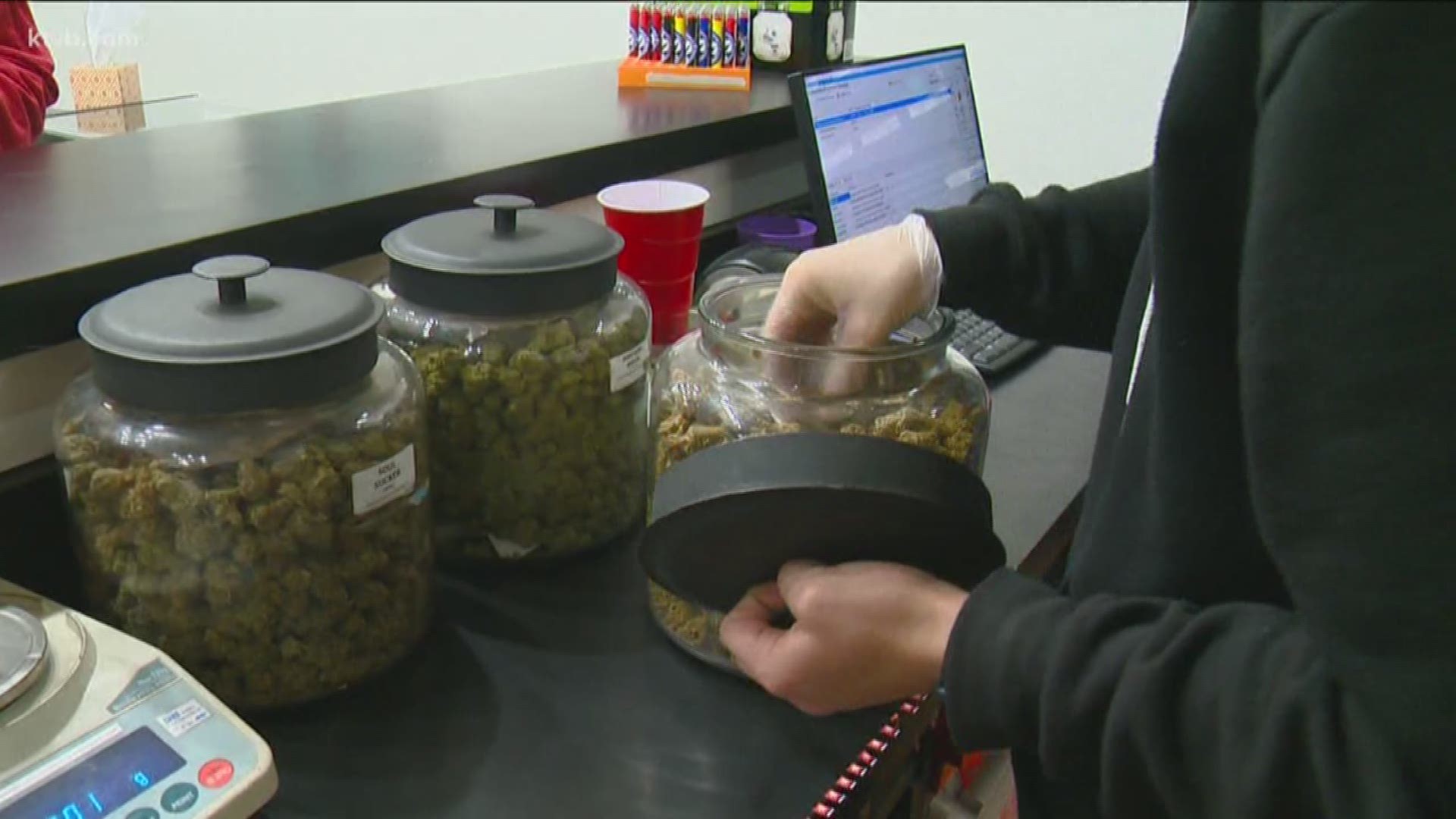 ONTARIO, Ore. — Ontario City Manager Adam Brown knows exactly how the eastern Oregon city transformed into a boomtown in the months since voters lifted a ban on marijuana sales.

You don't have to look any farther than the parking lots of the three existing dispensaries in Ontario, where Idaho license plates crowd out Oregon plates ten to one.

"This is the marijuana capital of Idaho," Brown said.

Oregon legalized marijuana for recreational use in 2014, but the City of Ontario originally resisted, exempting the town from the state's decision and banning pot sales. Voters reversed that ban in 2018.

RELATED: 'It's been an exciting wild ride': Ontario's first marijuana business set to open this week

Marijuana remains illegal in Idaho. But with Ontario sitting less than an hour's drive west on Interstate 84 from downtown Boise, Idahoans have clearly found a way around the law.

The customers that flock to the Ontario dispensaries might not be staying in town, but their money is. A 3 percent sales tax on marijuana has already brought $90,000 into Ontario's coffers, and Brown predicts that revenue will top $1.1 million in a year's time.

Weedology General Manager Eric Lantz says the dispensary has seen a steady stream of customers in the three months it has been open.

"It's hundreds," he said. "I mean, it starts in the hundreds before noon and we just keep going up."

1 / 13
Paul Boehlke/KTVB
Marijuana is big business in Ontario, where three dispensaries have opened since late July. A large percentage of customers are coming from Idaho, where pot remains illegal.

Weekends and holidays are particularly busy, but even on a mid-morning Monday, multiple people sat in Weedology's lobby waiting for their numbers to be called.

Although visitors to the dispensary are required to show their ID and sign in, Lantz said they do not keep official statistics on what percentage of Weedology's customers are from Idaho.

Burnt River Farms owner Shawn McKay said that some of the people who originally opposed dispensaries in Ontario have come around. Officials say they have not seen an increase in illegal activity since the dispensaries came to town.

"Once the stores come in, they see it's not this big monster," he said. "There are not people outside smoking joints - nothing like that."

The money helps too. Ontario struggled for years with repeated cuts and budget problems, leading the city to slash emergency services and shutter the city's golf course and aquatic center. The marijuana tax money has created some breathing room, enabling the city to hire two new officers and invest in Ontario's downtown and public parks.

"Every year it has been cut, and cut, and cut, and 'what do we have to cut this year?'" Brown said. "Our councilor who has been on there the longest - I think twelve years or so - this was the first budget where he was actually able to add something and feel like he was making progress and making our community better."

Still, officials know the cash infusion will not last forever. If marijuana is legalized in Idaho or on the federal level, Brown said, Ontario's customer base will quickly dry up.

As a result, the City of Ontario is spending cautiously. With the exception of the two new officer positions, Brown says, the city is focusing on permanent additions that don't come with an annual cost - things like new planters and benches downtown, new playground equipment, and paying down the town's retirement debt.

RELATED: Peek inside a legal pot farm 30 minutes from the Idaho border

A fourth dispensary, Top Crop, is poised to open in Ontario and the city has issued 14 pot shop permits in all, although Brown said he is skeptical the market could sustain that many. City code places limits on where dispensaries can be built: At least 1,000 feet from another dispensary, 1,000 feet from schools or parks, and 500 feet from residential areas.

"I think a lot of those are the same owners and it’s like basketball, they are boxing each other out," he said. "I don't see a lot of movement past this fourth one -  there's going to be more, but I don't think more will survive."

"We are all selling the same products. It’s kind of like gas stations or convenience stores, it’s a very competitive market," he said.

The availability of marijuana in Ontario is siphoning off some of the customers who used to travel to the farther-west town of Huntington, which has had dispensaries since 2016.

But Steven Meland, who owns the Hotbox Farms shops in both towns, says he has no plans to close the Huntington site. The Huntington Hotbox still gets several hundred customers each day, he said, many coming from cities west of Huntington, like Baker City.

Lantz said he isn't too worried about new dispensaries opening.

"There's a piece of pie there that everyone can have a bite of," he said. "It's good to have competition."