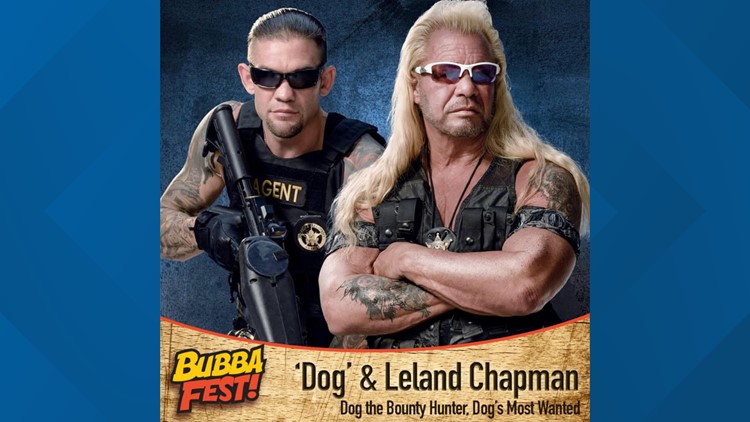 Bubba Fest has gone to the dogs! 'Dog' the Bounty Hunter returns to East Tennessee

KNOXVILLE, Tenn. — America’s favorite bounty hunters Duane “Dog” Chapman and Leland Chapman are returning to East Tennessee. The two met with fans at the inaugural Bubba Fest in Pigeon Forge last year, along the late Beth Chapman. As is often the case with visitors to the Great Smoky Mountains, they couldn’t wait to get back.

In a development sure to please fans from all over the country, Dog the Bounty Hunter and Leland are able to attend the “Southern-Fried Comic Con” Bubba Fest, this weekend.

“We had such a great time with the Chapmans last year,” said Bubba Fest Promoter Chris Lewis, “when they asked to come back, we were, of course, excited to have them.”

Lewis added that, “After the passing of Beth this summer, we know that many fans will want to reach out and pay their respects.” Dog and Leland will be signing autographs and taking photographs Saturday and Sunday at the event.

Dog and the Chapman family rose to fame during their A&E Network series “Dog The Bounty Hunter,” which ran for eight seasons and featured nearly the entire family at some point.

The new series “Dog’s Most Wanted” will premiere on WGN America this Sept. 4, and will see Dog, Beth, and a team of bounty hunters travel the country to hunt down their own “Most Wanted” list.

It also documents their personal life as Beth fought cancer, a battle she ultimately succumbed to. Bubba Fest will be Dog’s first public appearance since Beth Chapman’s passing.

Dog and Leland are excited to meet all new fans, as well as those who came to see them last year. Bubba Fest is excited and honored that the chose to rejoin us.

The duo will be at the event all weekend, along with Chuck Norris, Lee Majors, Michael Madsen, Nikolaj Coster-Waldau from “Game of Thrones,” Chris Sullivan from “This Is Us,” Khary Payton, Cooper Anderson, and Ross Marquand from “The Walking Dead,” Danny Trejo, Sean Gunn from Marvel’s “Guardians of the Galaxy,” Sam Jones, Billy Gunn and Road Dogg Jesse James- WWE’s New Age Outlaws, voice actors, comic creators, and dozens of vendors.

RELATED: 'This Is Us' star Chris Sullivan coming to Knoxville for Bubba Fest

RELATED: Game of Thrones star to visit Knoxville for Bubba Fest in August