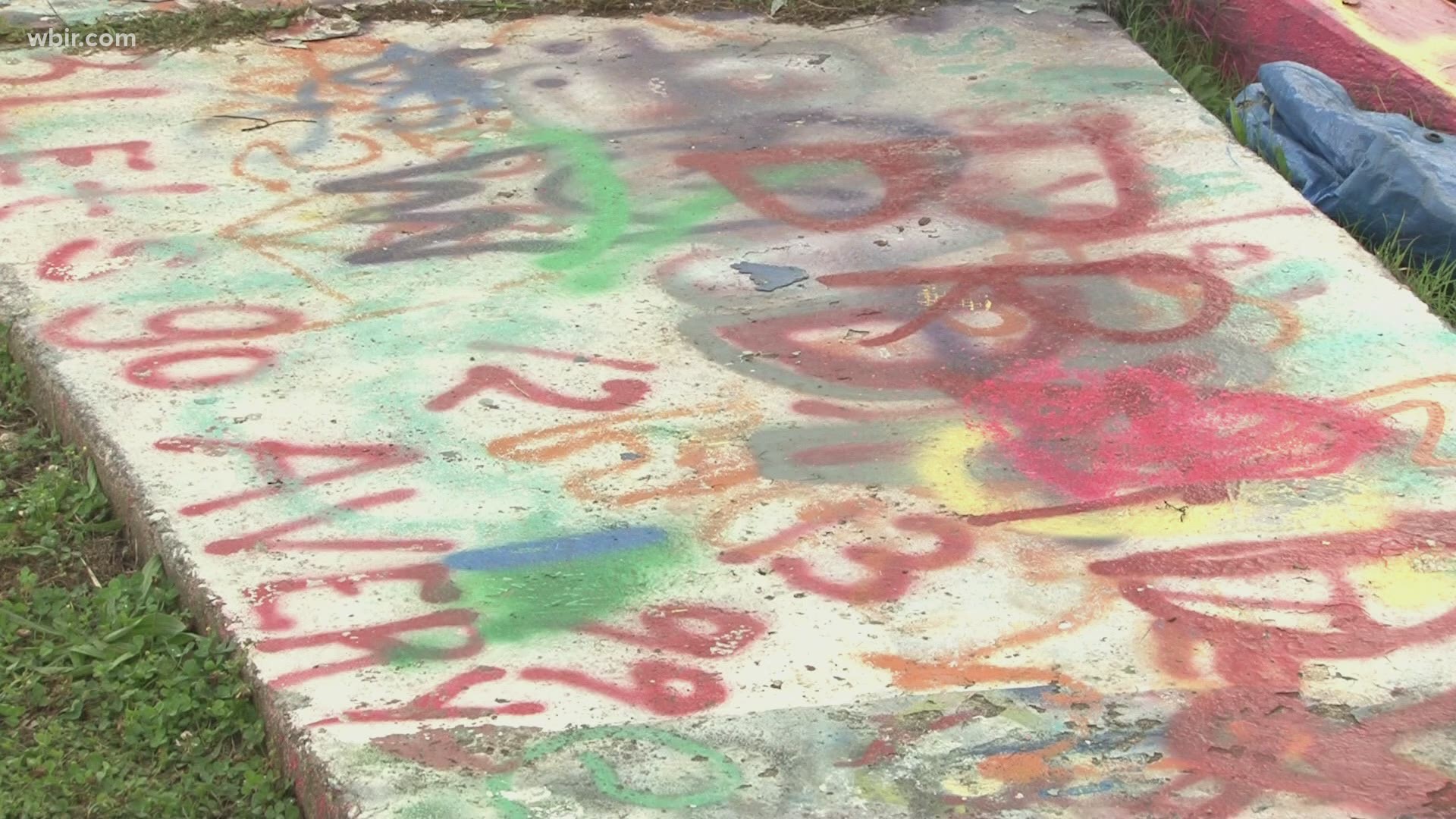 ALCOA, Tenn. — UPDATE (9:45 p.m.): The Alcoa Police Department released a statement Friday night specifying that it is not discouraging anyone from painting on the bridge in Springbrook Park.

Police said the City of Alcoa posted a sign asking people not to paint on the sidewalks and streets at the bridge, as they have asked people to do in the past. The signs are meant to be a visual reminder of the request.

They specified that the bridge itself can still be painted.

The original painters said they went to repaint the flags after they were covered with slurs. While they were repainting, city crews asked them to pack up their materials because they planned to cover the bridge in gray paint, covering the slurs.

The teens said they spoke to a commissioner who told them they could continue painting the bridge, but not the sidewalks or streets.

Organizers previously said in a social media post that they were advised not to paint the bridge again until further notice. The comments as well as the donation page for a "Pride billboard" and supplies to repaint the bridge was not available on Facebook Friday night.

Information about why it was no longer available was not immediately available.

"Whoever put that on there, why would you do that? Children can see and read what you put on there," one of the organizers said.

SPRINGBROOK PARK BRIDGE: Despite what is being reported by news media, the Alcoa Police Department is not discouraging...

The Alcoa Police Department is suggesting people stop painting a bridge well known for community art for the meantime after hatred within the area flared up following a viral video of a woman insulting teens for painting Pride flags on it.

Police said people recently began painting hateful slurs on the bridge to cover up the Pride art. City crews cleaned the slurs up Friday morning, and officers have been periodically patrolling the area, according to the Alcoa police captain.

On Wednesday, a video of a woman painting over Pride flags on the bridge was shared widely online. As she painted over the flags, she directed a hateful tirade at the two teens who painted it. The woman told the teens that "they were not different anymore" and insulted them for painting the flag. The woman then hurled expletives at them and eventually started using racist language against them as she shook a spray paint can, which was later used to cover the flags.

"In my entire life, I had never heard anyone say things like that to me," said Jasmine Martinez, one of the teens who painted the flags and filmed the woman.

The teens returned to the bridge to paint Pride flags again on Wednesday, but those were covered soon afterward. They planned to return to the bridge once more Friday evening, but Alcoa police advised them not to paint the flags again for their own safety due to the outward displays of bigotry.

"While we would continue painting the bridge Pride colors until I turned blue in the face, it is now becoming dangerous to do so," said one of them in a social media post. "If allowed by the city, we will be back to paint the bridge again, but at this time it is not advised."

Organizers were raising funds to put a "Pride billboard" in the area and to continue supporting the LGBTQ+ community in Alcoa. They are aiming to raise $1,500 and said they have been working with a company to display Pride-related content on a billboard in the Maryville and Alcoa area.

However, the page to donate through Facebook is no longer available.