Three Austin-East students opened up about the pain, the healing and what gives them hope for a better tomorrow after losing five classmates to gun violence. 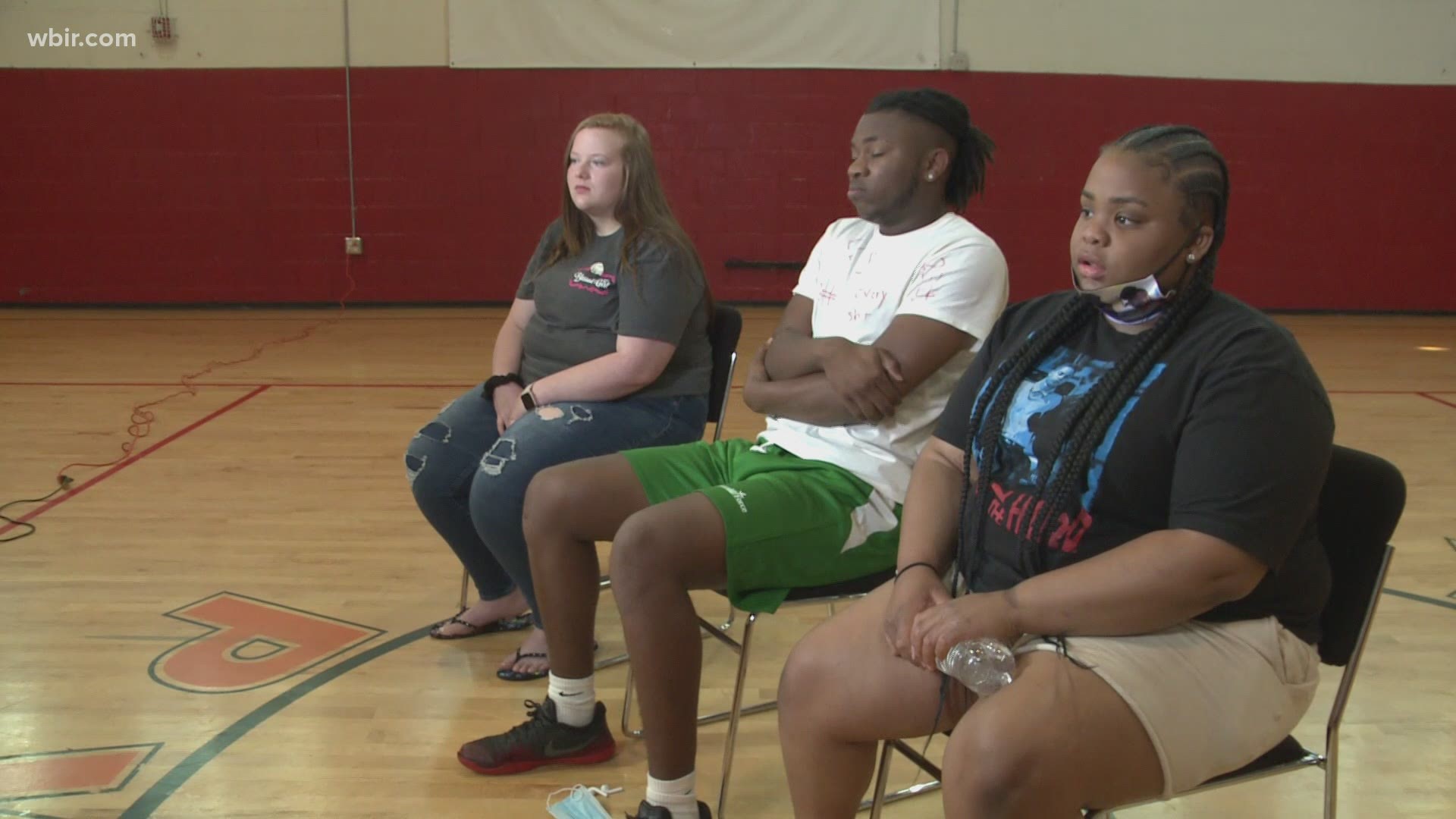 KNOXVILLE, Tennessee — For Austin-East Magnet High School students, this past semester has been one marked by tragedy and trauma after losing five current or former classmates to gun violence in a span of a few months.

Stanley Freeman Jr., 16, was shot and killed on Feb. 12 as he was leaving Austin-East.

Janaria Muhammad, 15, was found shot to death the night of Feb. 16.

Jamarion Gillette, 15, died after being shot along Cherokee Trail on March 10.

Anthony Thompson Jr., 17, died after being shot during a scuffle with Knoxville police officers in a school bathroom on April 12.

“Actually experiencing five students that go to your school have been killed, and sad thing is you knew four out of five of the students, it's really a lot,” said Kaylen Stubbs, a junior at Austin-East.

The students, whose lives were cut short, were not just classmates in school, but friends outside of the classroom.

“I was friends with Janaria Muhammad,” said Denaijah McMillan, a freshman at Austin-East.

McMillan said Janaria's absence left a hole in her heart because she had known her since middle school.

“With me, going to school and having to go to third block and she's not walking in class with us, it’s really sad and depressing,” McMillan said.

Stubbs said he was best friends with Stanley Freeman. He said it’s the simple conversations he misses the most now that Stanley is gone.

“We used to come [to the YWCA] and play basketball. We used to hang out outside of school, talk about basketball, shoes, cars,” Stubbs said.

When he found out Stanley died, he said he couldn’t believe it. He had just talked to him before leaving school.

“I actually was the last person to talk to him the day he died,” Stubbs said.

Students said losing their peers and friends to violence has created fear.

“It’s been kind of scary. I would say it’s been really hard to walk into the school and just be in the area 'cause who’s going to go next?” said Brittney Brown, a junior at Austin-East.

Brown said this fear made her decide to stop doing in-person classes at Austin-East.

“These events have affected me to where I don’t want to go in-person to my classes,” Brown said.

The students said healing has been hard to come by after so much trauma in quick succession.

“I don’t think you can heal. I mean, just try to hold your head up,” McMillan said.

They said the memories of their classmates and lifelong friends are never far from their minds.

“I still be looking at pictures of me and Janaria that we took in middle school and I be like, 'Dang, my girl really gone' and start tearing up," McMillan said. "It’s really depressing that she’s gone and had to lose her life. The way she lost her life is really sad.”

The students still have many decisions to make. One of those being whether or not to attend Austin-East next year.

“I probably would have to go to another school, you know, it’s more than just me being scared for myself, but my mom is scared for me so I really can’t go back,” Stubbs said.

For now, they hope the violence stops so they don’t have to lose any more friends or classmates.

“Well, I hope that they can just put an end to gun violence and make everything back to normal again,” Stubbs said.

They want to end the violence and to stop seeing peers kill one another. Two teens were arrested and charged in March for Stanley Freeman's shooting death.

“I really hope this gets to some minds because I’m tired of it. Y’all killing Black on Black, y’all say, 'Black Lives Matter' but y’all killing each other,” McMillan said.

As hard as the past few months have been, it has given the students time to step up and use their voices.

Stubbs, McMillan and Brown all helped put together the YWCA Youth Violence Awareness activities, giving them the chance to play a part in stopping the violence.

Despite having a lot of bad days, there are good ones sprinkled in too, they said they see something changing and it gives them hope that better days are ahead of them.

Brown said this sense of community is helping her see the best in people.

“Even though I wasn’t born here in this community, I see a lot of great potential in the people that are here and I just want what’s best for everybody,” Brown said.

Stubbs smiled when he said he hopes to return to the basketball court next year for his senior year.

Brown said she is happy to have encountered the YWCA, which has made her short time in Knoxville worthwhile.

McMillan grinned when she said she is going to try out to be a cheerleader next year with the goal of graduating from Austin-East, just like her parents.

"I want to be a Roadrunner for life. I want to graduate from A-E,” McMillan said.

MORE FROM THE COMMUNITY AS IT TACKLES GUN VIOLENCE: