Here's a guide to just a few of some new murals you're probably seeing across the city. 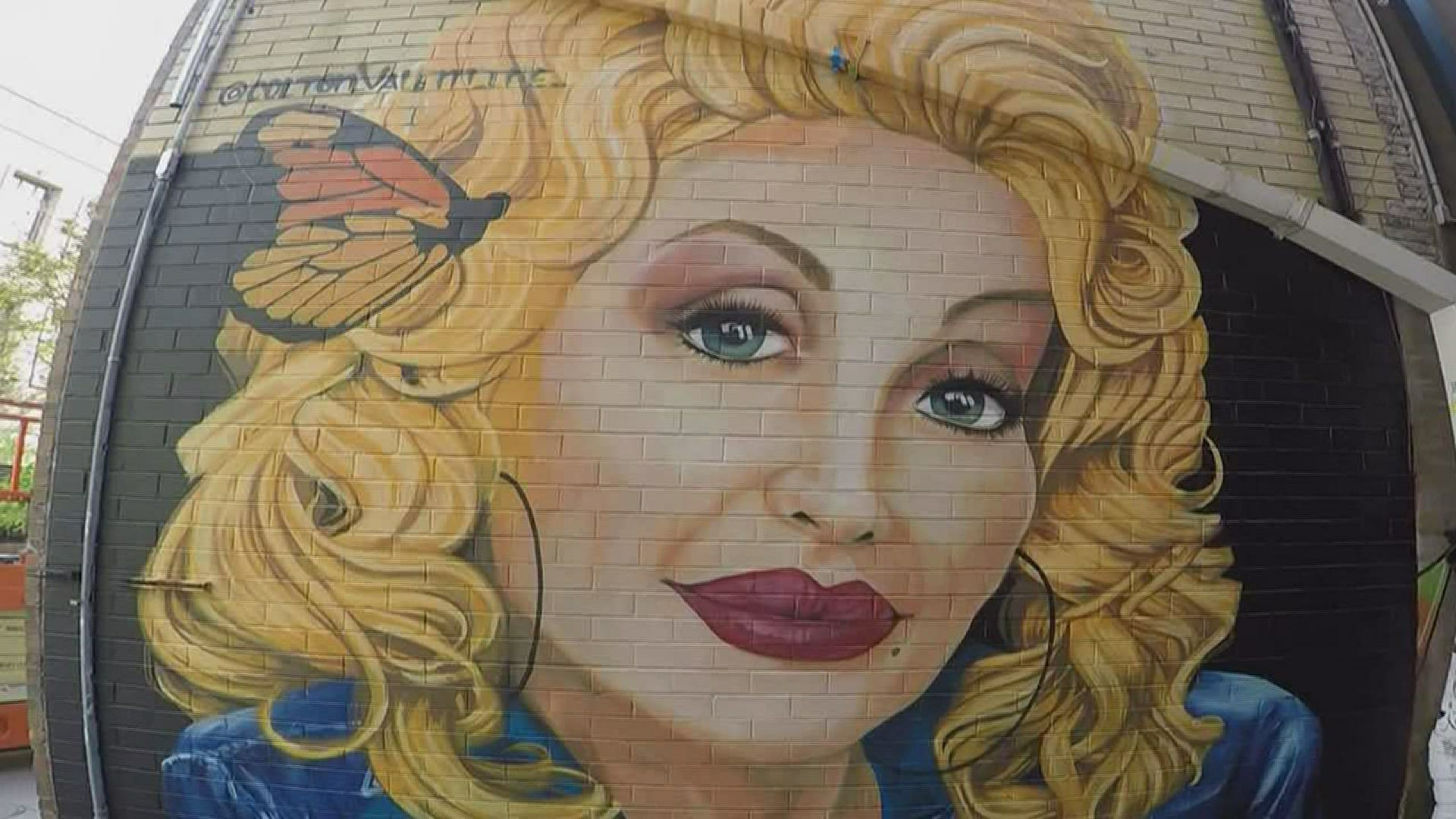 KNOXVILLE, Tenn. — Even if 2020 has been a little dreary for you so far, local artists are hard at work across Knoxville to bring some color to the gloom!

Several murals have popped up across the city in recent months.

If sightseeing some of these new works of art around town sounds like a socially distant good time, you're not alone! Here's a brief guide to some of the latest installments that have caught our eye!

1. Windows to the Smokies

Work finished last month on this 12-foot by 50-foot mural entitled, "Windows to the Smokies."

The artwork is part of the the newest and biggest addition to the Dogwood Arts Mural Program, now in its second year.

Artist Megan Lingerfelt designed the piece to capture architectural elements from all over the city including St. John's Cathedral and The Oliver Hotel.

She brings those elements to eye level allowing you to see the blue haze of the Smokies reflected in them.

"This wall, whenever I was approached for it, it felt really special because of its location. And having the ability to make a landmark, the opportunity to do this, and have my name on it for however long its here, it's really, really, really exciting. I feel honored, honestly," Lingerfelt said.

You can see 'Windows to the Smokies' on the corner of Gay Street and Wall Avenue.

Have you caught a glimpse of this guy? This cool mural inside the Inskip Grill is yet another Lingerfelt creation.

It's a detailed vision of King Kong climbing a cheeseburger topped Sunsphere!

On Instagram, the artist outlined her process for making it happen "He clearly has a lot of fun with his menu and I was excited to extend that sentiment into a mural for his building. After a few months, a pandemic, and a new location the Burger-sphere has come to life with a partnering 'grilla' overseeing the dining room," Lingerfelt wrote.

"Walls for Women" is creating 10 original murals by female artists all across Tennessee.

One of them is at Printshop Beer Company in South Knoxville.

This is artist Paris Woodhull's first-ever outdoor mural. For the project, she can create a mural of whatever she wants, which she said is a welcome change. 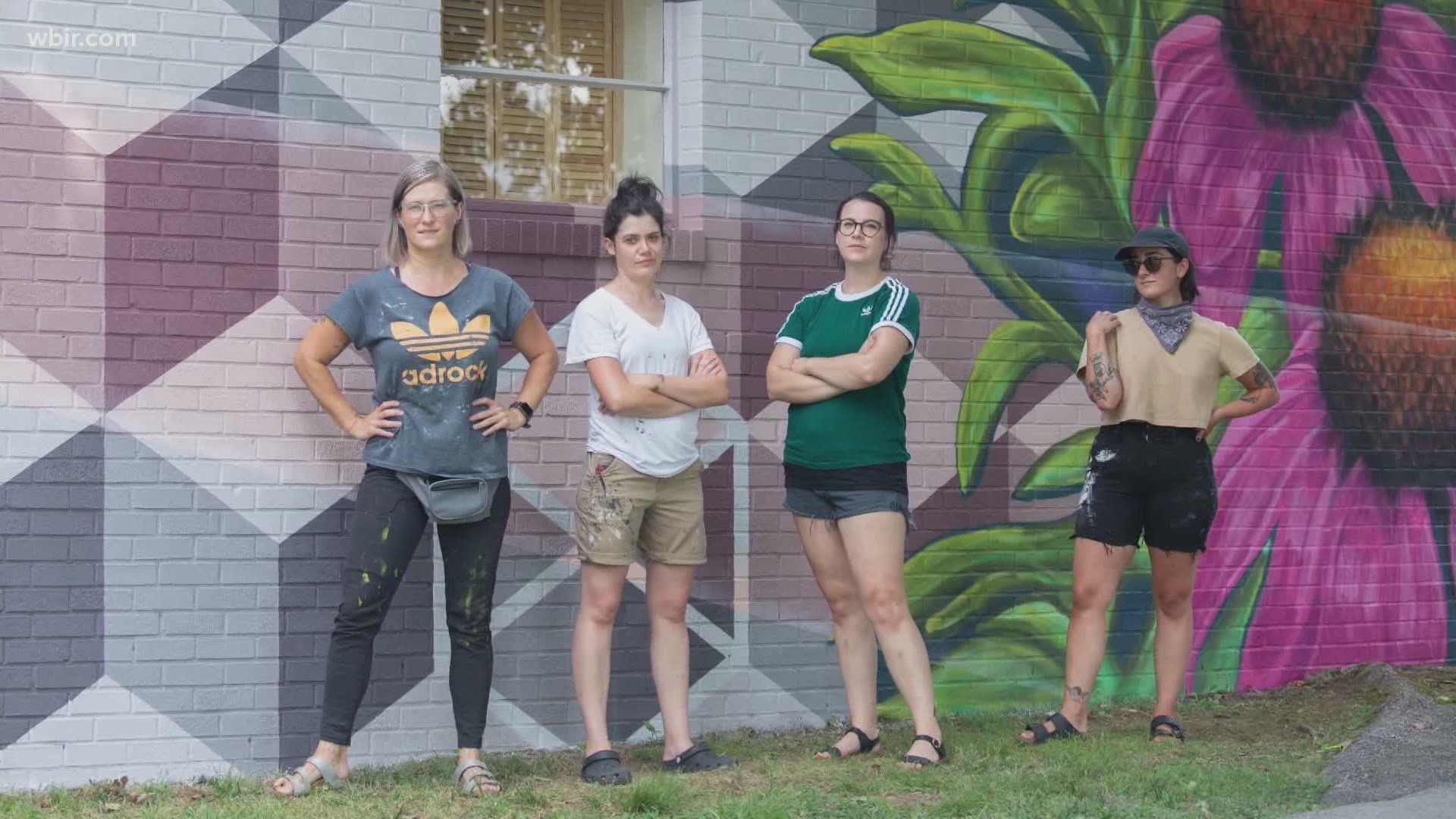 "They just wanted to give women the opportunity to create whatever they wanted. Never have I ever had someone come up to me and be like, 'Well, what do you want to create?' It almost caught me off guard because I'm so used to client work," Woodhull said.

Woodhull said the opportunity to celebrate the 19th amendment is special to her because her great, great, great grandmother Victoria Clafin Woodhull was the first woman to run for president back in 1872.

You can learn more about the project HERE.

Artist Curtis Glover is about a third of the way done on a project on the rooftop of Embassy Suites downtown, where you can sip on a beer and gaze at the wild blue Appalachian flowers.

This kaleidoscope of color can be found on Strong Alley. Another piece by artist Megan Lingerfelt, it's an intricate pairing of teals, rusts and mandarin in Knoxville's only "rug" wall style mural!

Have a favorite mural you like to see around the city that didn't get some love here? Email us at 10Listens@wbir.com!