An estranged daughter, a to-do list for death, a malicious manicure, helium and a poisoned pot roast. The prosecutor calls it "something out of a novel." 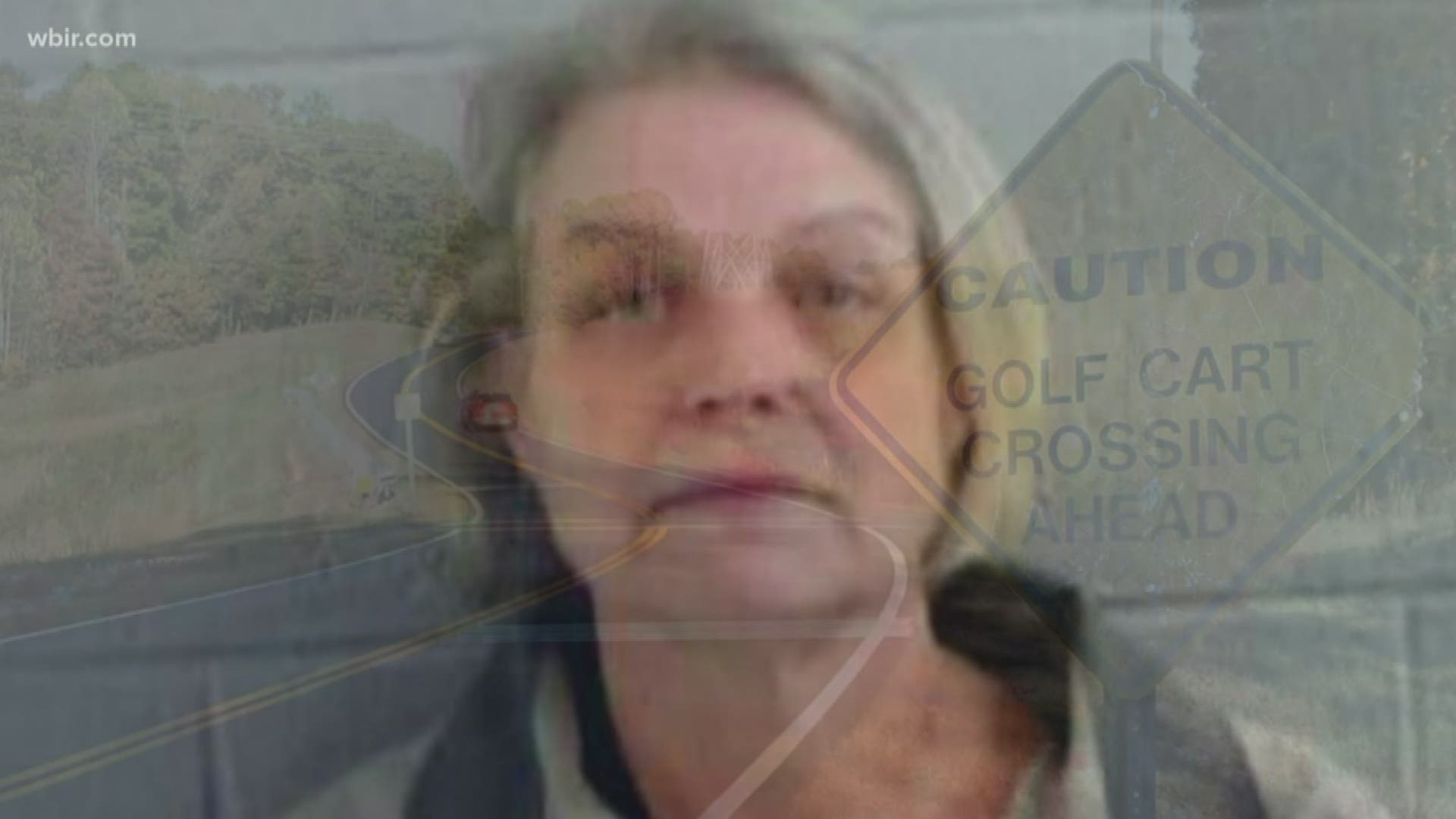 TELLICO VILLAGE, Tenn. — When Kimberly Hopkins knocked on the door of her parent's house in Tellico Village, she had one goal in mind.

The 50-year-old came home to kill.

What followed was a Father's Day weekend of strange twists and turns: a dead dog, a poisoned pot roast and a manicure designed as a cover for murder.

"It sounds like something out of a novel," Loudon County Assistant District Attorney Jed Bassett said. "It just seems rather bizarre the way everything came about."

Prosecutors believe her motive was financial and her plan – to make it all look like an assisted suicide – may possibly have worked.

Hopkins pleaded guilty to the attempted first-degree murder of her mother last month. Now, prosecutors are releasing new information about her case including evidence photos and previously unreported details of her plot. 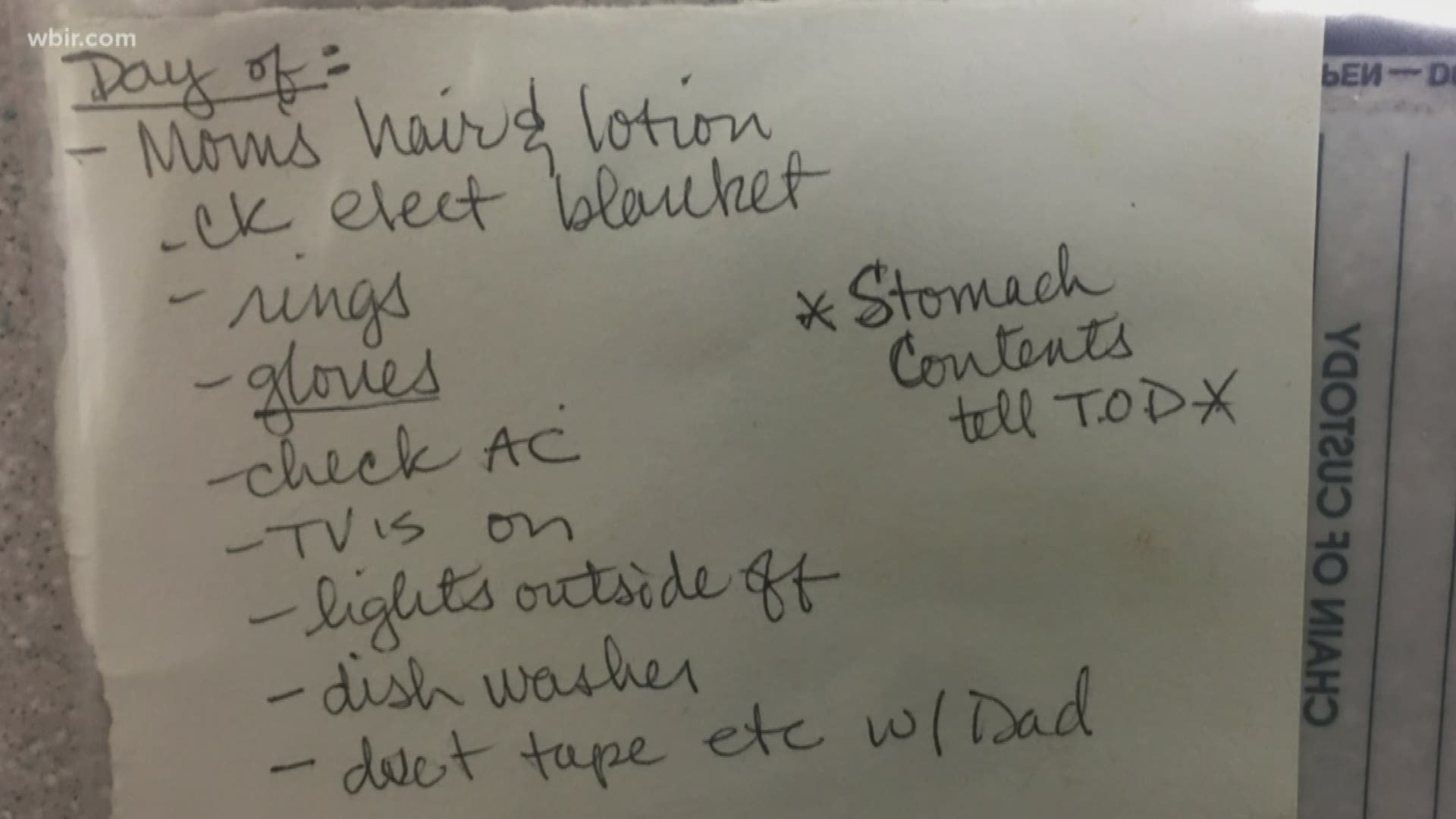 A handwritten "to-do list" for death her father found in her car helped investigators piece together her plan and a book leftover from a previous investigation led to an incriminating comment.

Her parents, Jon and Jan Martin, both in their 80s, declined to be interviewed. Prosecutors said they had near-opposite attitudes toward their daughter's punishment. Jon Martin wanted the maximum penalty, they said. Jan Martin would've been fine if their adopted daughter faced no jail time at all.

Hopkins pleaded guilty and was sentenced to 15 years in prison in October.

RELATED: Greene Co. man charged with killing fiancé more than a decade after her death

RELATED: Woman charged with stabbing her husband in the chest

Hopkins had an early plane to catch one morning in June 2018. Handwritten notes from an evidence file show she woke up at 4:30 a.m. for a 7 o'clock flight from her home in Medford, Oregon to Atlanta.

Credit: LCSO
A handwritten note shows Hopkins had an early flight to catch from her home in Oregon.

It was Wednesday, June 13. Four days before Hopkins would try to kill her mother.

After the cross-country flight, prosecutors said she spent the night with a friend in Atlanta, then rented a white Jeep and drove to East Tennessee first thing Thursday morning.

Her parents were not expecting her. Bassett said they had been estranged for years, although the Martins continued to financially support their adopted daughter by sending her a couple thousand dollars each month.

When Hopkins knocked on the door of their home nestled in the wealthy Tellico Village retirement community, her parents had very different reactions.

"Her mother was really excited she was there and really wanted to reconcile and patch things up with her daughter," Bassett said.

Her father harbored a growing suspicion, especially when Hopkins asked for the name of their financial adviser soon after arriving.

"He thought that was pretty odd."

In days leading up to Father's Day, the Martins received an unusual delivery.

A FedEx driver dropped off three helium tanks and some balloons. At first, the Martins assumed it was part of a Father's Day celebration.

Then, a book called "Final Exit" showed up on their Amazon orders.

They cancelled it before it arrived, but the subtitle later caught investigator's eyes: "The Practicalities of Self-Deliverance and Assisted Suicide for the Dying."

Then, their family dog died.

"We don’t really have any proof that she killed the dog," Bassett said. "But it's my understanding that during the course of her stay, that their dog passed away while they were at a dinner at church I think."

When Father's Day came around, the Martins and Hopkins went to Sunday service together at The Community Church at Tellico Village, but Hopkins left early.

Investigators said she took her parent's credit card and went to the Target in Maryville, bought some clothes and went back to their home.

When the Martins arrived home from church, Hopkins had a pot roast ready for her father. She offered to give her mother a manicure and pedicure in the back bedroom.

In a statement to investigators, Jan Martin said it began normally as her daughter gave her a pedicure.

"She put lotion and rubber gloves on me," Jan Martin writes.

"Then she put zip ties on each wrist plus two extra zip ties securing both wrists."

Credit: LCSO
A portion of Jan Martin's statement to investigators.

"Then she put tape on my chin/mouth – then she put a plastic bag over my head and said, 'I have your Alexandrite ring."

Jan Martin described her panic as she screamed and tried to get up from the chair.

"[I] struggled to the door, screaming for my husband," she wrote.

"She took the unopened helium box, stormed to her rental car and drove away," John Martin wrote in a statement to investigators.

On the 911 call, John Martin is understated. He told an operator he was confident his credit card had been stolen and wanted to know his options.

"We have a daughter who is visiting us from out of state who is acting in a very psychotic manner," he said haltingly.

When Loudon County deputies arrived, they suspected there was more to the story.

"As the sheriff's department started digging into the case a little bit more, they found some other things that made them think 'yeah, okay, there's a lot more going on here,'" Bassett said.

Deputies told the Martins to lock their doors – and call 911 if Hopkins came back.

Hours later, she did.

"Our lives are in danger"

Hopkins used her parent's garage door opener and tried to get in the house through the inside door.

Then, referring back to the detective who told them to lock their doors hours before, he said, "Shrek says our lives are in danger."

She was charged with stealing her parent's credit card and her mom's ring.

Detectives had only begun to realize her full plot.

Investigators' first hint that there was more to the story came from Hopkins' father, who found a handwritten note inside her rented Jeep.

"It was in her handwriting and basically the size of a Post-it note," Bassett said.

On the top it says “day of." "Gloves" are underlined. The note indicates that the television inside is to be left on, the lights outside turned off.

Credit: LCSO
A copy of Kimberly Hopkins' "to-do" list investigators say was her plan for murdering her mother.

Among the items on Kimberly’s note: "electric blankets."

"I think that probably would have been to keep the bodies warm. To throw us off as to how long they had been gone," Bassett said.

“Duct tape etc with dad” is written at the bottom.

"There was even a note that said stomach contents determine 'TOD' which we thought was time of death," Bassett said.

With the note in hand, detectives brought Hopkins in for an interview. They now had a suspicion of what she might have planned, but it was an interrogation room slip-up that gave it away.

Detectives entered the interview room with a copy of the book ordered on the Martin's Amazon account, "Final Exit."

"And she makes a comment 'I see you have my book,'" Bassett said.

Inside its pages, a description of how to die using a helium tank and a plastic bag. The details sounded familiar to Jan Martin's story.

"That was ultimately how she was going to kill her mother and try to make it look like an assisted suicide," Bassett said.

"She talked about how her parents' condition was deteriorating. How it was failing. And because of their failing health – they wanted her to help them kill them," he said. "They adamantly deny it."

"She was making it up, to I guess try to make it look like some sort of alibi or some sort of excuse for what she was doing," Bassett said.

On a sneaking suspicion, investigators sent Hopkins' pot roast, the Father's Day gift to her dad, to the TBI crime lab.

"The TBI report came back positive for diphenhydramine, which is a kind of sedative and it will put you to sleep like Zyquil and Benadryl and things like that," Bassett said.

With this information in hand, investigators charged Hopkins with attempted murder.

"When you break it down individually, some of the things she did doesn't seem suspicious at all," Bassett said. "But when you start to see the forest instead of the trees, you can certainly see that there was a plot there."

But Kimberly Hopkins was not done yet.

Bassett said, if the case had gone to trial, prosecutors would have called upon jailhouse informants to testify Hopkins had tried to kill her parents one more time.

"There were a couple inmates here at the jail who Kimberly approached and possibly solicited their help in 'taking care of' her dad," he said.

Bassett said she plied the inmates with TVs and cash if they snuck in and killed him when her mom wasn’t home.

He said she then thought her mother would drop the case.

"Her dad wanted to see her get the maximum punishment that was available. And her mother was very, very forgiving to the point where she would have been content in us dismissing the charges," he said.

In early October, Hopkins pleaded guilty to first degree attempted murder. She is currently serving a 15-year sentence at the Tennessee Prison for Women near Nashville.

She is eligible for parole in December 2020.