Michael Gray, 63, and Shirley Gray, 60, had lived at the home on Cedarbreeze Road in Halls until about 2016, and their son, Anthony Gray, lives there now. 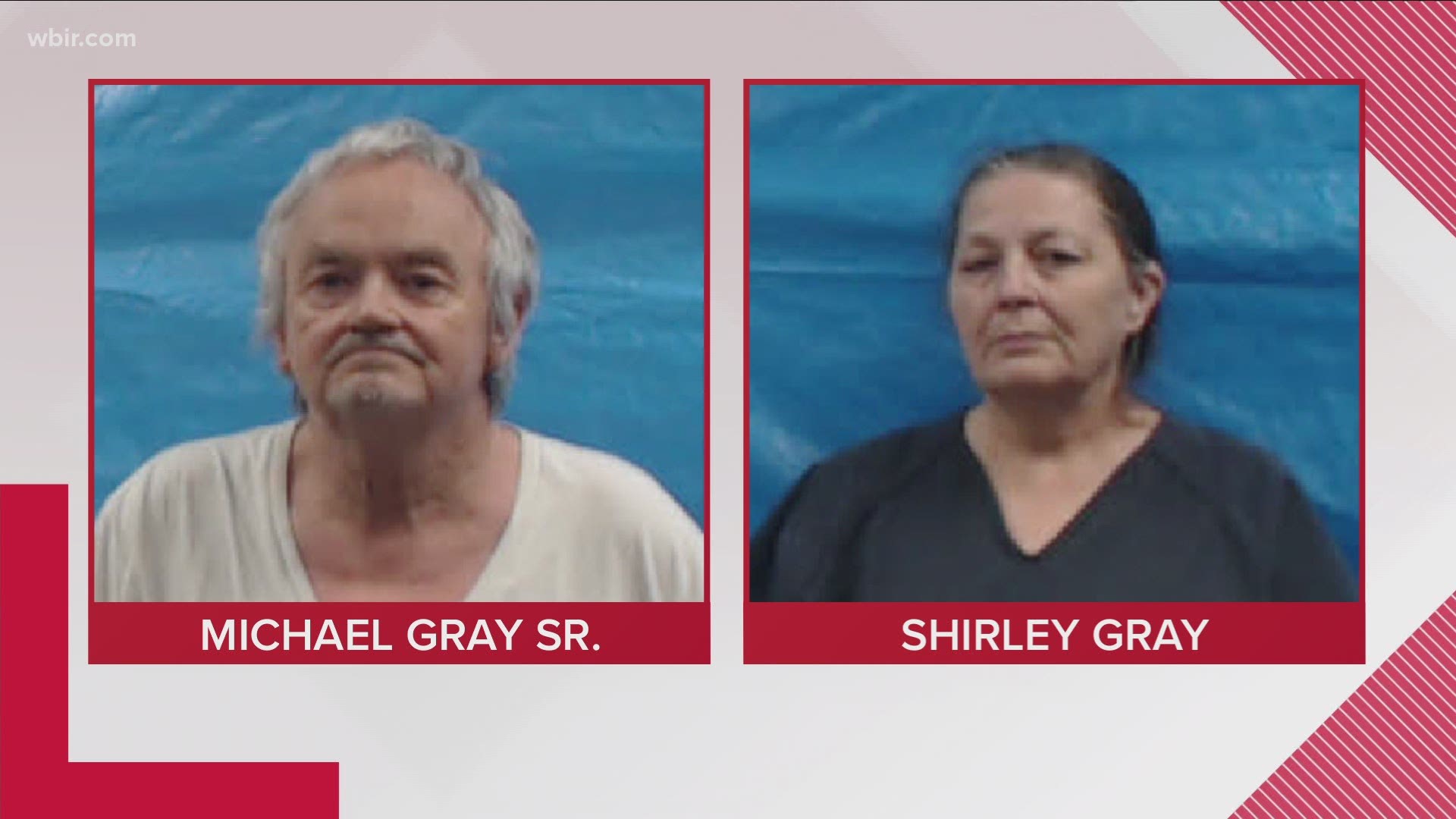 KNOXVILLE, Tennessee — Knox County authorities have recovered a boy's remains from the yard of a home shared by Michael and Shirley Gray and their family members, and the couple have continued to draw monetary benefits meant for the care of the dead child as well as another child whose body was found in Roane County, records state.

The child is thought to be Jonathan Gray, their adoptive son, and he's believed to have died in 2015 or 2016.

The allegations are contained in a Knox County search warrant affidavit for the home at 6416 Cedarbreeze Road in the Halls area.

Michael Gray, 63, and Shirley Gray, 60, had lived there in years past, and their son Michael Anthony Gray Jr. still lives there and owns it. The Grays' daughter, Carolyn Gray, also lived there for a period with her children, the warrant affidavit signed by Knox County Sheriff's Office Detective Jeremy Wise states.

The investigation into the Grays includes at least two counties and involves at least five adoptive children, records show.

It began Friday in Roane County after one of the Grays' adoptive children, an 11-year-old boy who appeared much younger, was found unattended in the neighborhood.

Authorities then spoke with Michael Gray, who eventually admitted the couple had several adoptive children who'd been kept in fetid conditions in the basement, according to records.

One of the children died, and Gray Sr. buried her on the property, authorities allege. Remains thought to be Heather "Sophie" Gray were recovered early Saturday.

From Roane County, the investigation spread to Knox County.

Knox County authorities went to the Halls home over the weekend along with personnel from the Regional Forensic Center. They dug in the yard of the Cedarbreeze home.

That's where they found what are thought to be Jonathan Gray's remains, the search warrant affidavit states.

Michael and Shirley Gray lived in the Cedarbreeze home up until about 2016. They shared the home with their son, known as Anthony, according to the warrant return.

The elder Grays lived in the lower level with five adoptive children. Anthony and his partner lived upstairs, records state, as did Carolyn Gray and her three children on at least one occasion.

Evidence recovered during the investigation this week shows the adoptive children were subjected to abuse while they lived at the Cedarbreeeze home, according to records. Evidence suggests Anthony Gray, also known as "Bubba", knew it was going on.

One of the Gray children, a 15-year-old boy, told Knox County authorities this week that he'd been kept in a small room and in a cage in the lower level of the Halls home. He told them the other children also had been abused and confined at the Halls home.

At some point, he said, Jonathan became sick and disappeared from the house, never to be seen again, the warrant return states.  He said his parents told him Jonathan had gone away to live with another family.

Roane County authorities say the 15-year-old was found confined over the weekend in the Ten Mile home as their investigation got underway.

The Grays' 11-year-old adoptive son also described to investigators abuse in the Halls home. He said Anthony Gray's partner would come downstairs sometimes where the children were "confined", the affidavit states.

Wise, in the affidavit approved this week by a Knox County judge, said he'd gone into the Cedarbreeze home with Anthony Gray's permission. There, he said, he found downstairs a "large dog crate" and a locked room with a peephole and a reverse lock.

"Inside that room there appeared to be bodily fluid smeared on the wall," Wise wrote.

It appears no one has occupied the downstairs recently.

Gray Sr. and his wife never reported the deaths of Sophie or Jonathan Gray, according to the return warrant. They've continued to receive adoption payments from the state for the dead children as well as other financial benefits for all the adoptive children, records state.

In addition, Roane County Sheriff's investigators have recovered Gray Sr.'s phone. On it they found a March 25, 2020, message from Anthony Gray to his father.

Investigators also think Anthony Gray has been claiming the 15-year-old boy and the dead girl on his federal income taxes as dependents, while also telling officials he didn't know Sophie or Jonathan were dead or that the elder Grays had abused the adoptive children.

Michael Gray and his wife are being held in Roane County on multiple charges that include child abuse.

Knox County authorities have been at the Cedarbreeze home several days this week, including all day Thursday. Anthony Gray came and went occasionally during the day.

The three surviving children in the elder Grays' care, two boys and a girl, are all now in the custody of the state Department of Children's Services. Authorities said all of them appeared "stunted in growth" and had likely not seen a doctor in years.

According to court documents, Michael Gray admitted that he and his wife withheld food as punishment while living in Roane County and that both boys, ages 11 and 15, had been confined in an unfinished basement for long periods of time, one of them for years.

There was no running water or electricity in that small concrete room, and deputies found a bucket that had been used in place of a toilet.

DCS authorities said privacy laws prevented them from providing any specific details of the case, but they are committed to the investigation and to making sure the surviving children are in a safe place.

“Words are inadequate. Cruelty such as this makes us question all that we know to be true. I am so grateful to the passersby who saw a child in a situation that just didn’t seem right and stopped to help. That one small action led to the discovery of children who were victims of severe abuse and neglect. Those children are now in a safe place and being cared for and their parents face significant criminal charges. I am also thankful for our DCS child protective services staff who worked together as a team, followed their instincts to dig a little further when first notified of the situation and immediately alerted law enforcement," said DCS Commissioner Jennifer Nichols in a statement to 10News.

Credit: WBIR
Investigators believe four children lived in this Roane County home for years in horrible conditions, including little food and being locked in a basement. An 11-year-old girl died and her parents admit burying her in the barn.