"Those individuals who are determined to be subject to removal will be administratively arrested and placed in removal proceedings, we cannot release specifics on the arrests," according to the statement provided by ICE. 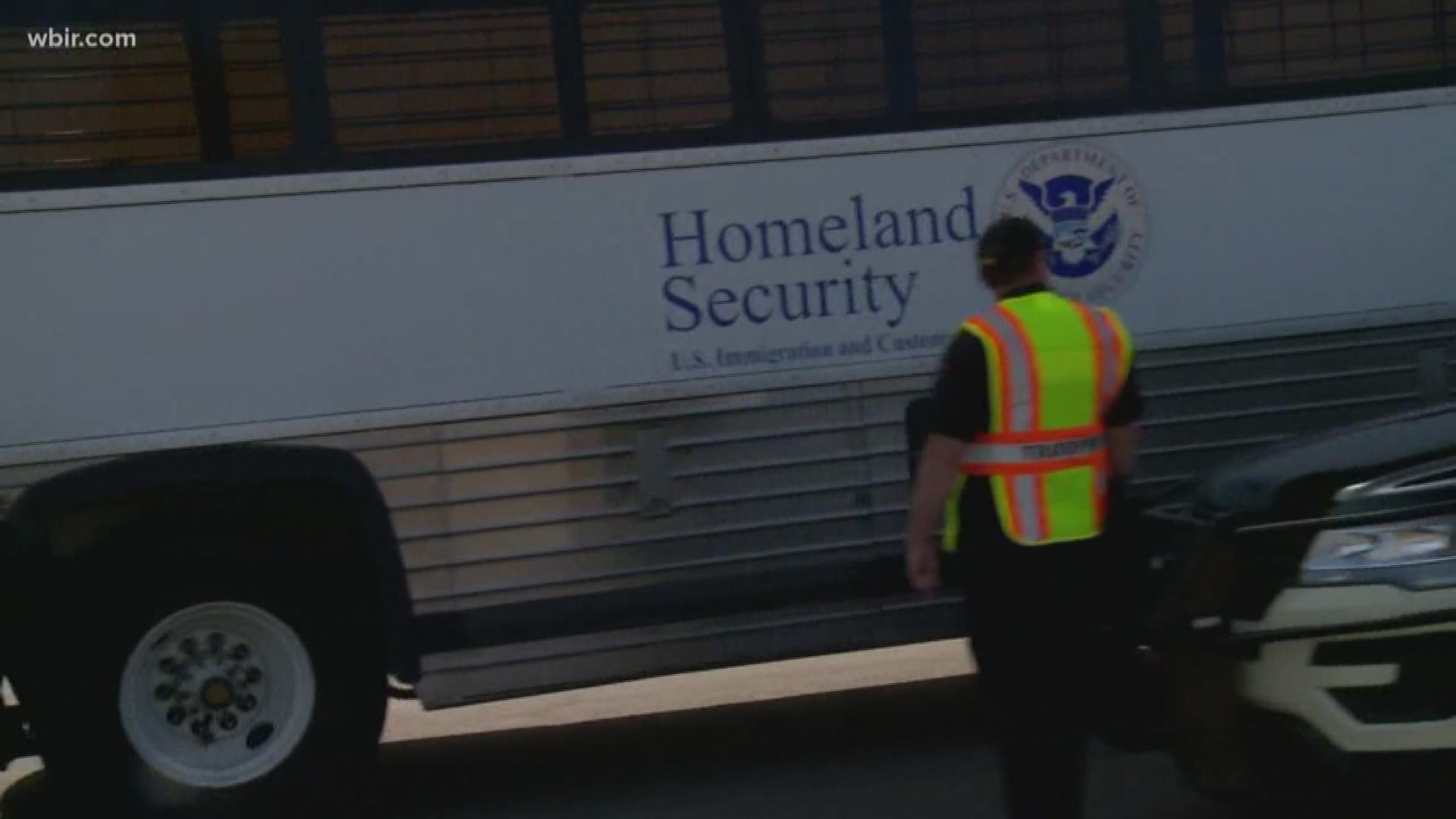 (Editor's note: We've translated part of this story into Spanish at the end of this article. You can also see a Spanish video version below. Hay una versión en Español a continuación.)

MORRISTOWN, Tenn. (WBIR) - Most people detained Thursday during an ICE raid at a Grainger County meat packing plant are on their way to a detention center to eventually face deportation proceedings, according to a statewide coalition working to secure legal representation for detainees.

WBIR 10News has also received documentation from the U.S. Department of Justice detailing the investigation leading up the raid at Southeastern Provision, including the affidavit that names the plant's president and his wife in the investigation among others.

The affidavit lays out an investigation into the plant, detailing observations in a potential scheme to employ dozens of employees off the books -- all the while exploiting those employees' illegal working status and making them work in unsafe working conditions. The document also mentions employees underreporting their own income to the IRS for their personal gain.

A family member of one of the detained workers spoke with WBIR, saying her husband made $6 an hour, paid in cash by the company. The investigation leading up to Thursday's raid corroborated accounts from seasoned IRS personnel, as well as an undercover law enforcement operative who posed a worker at the plant for days being paid $10/hour in cash.

You can read the details of that affidavit below.

ICE said Homeland Security investigators encountered 97 people during the raid who were subject to removal from the U.S. Of those, 54 were put into detention, 32 were released from custody, 10 were arrested on federal criminal charges, and one was arrested on state charges.

According to Stephanie Teatro, the co-director of the Tennessee Immigrant and Refugee Rights Coalition, the majority of people detained Thursday are on their way to a regional detention facility in Louisiana where they will eventually face deportation proceedings.

Affected families can locate those detained at this link.

Teatro said those released Thursday night either had legal status to reside in the U.S. or young children to take care of.

For those who were taken to the detention facility, Teatro said her organization is working to find them legal representation and support for their families.

"Hundreds of families have been devastated here in this area," she said. "We've been overwhelmed with people who want to help. We're hoping to coordinate volunteer services as well."

Teatro said the raid sent a "wave of fear" across the community, saying its impact will likely last for many months to years.

The TIRRC said outside immediate legal representation, it's working to partner with local businesses and schools to coordinate support and help for families.

Lawyers and translators were at St. Patrick's Catholic Church on Friday to help people understand their rights and to provide guidance on what they can do going forward.

Affidavit Details What Led Up to Raid

ICE released the affidavit that led to a search warrant at Southeastern Provision, the meat packing plant at the center of the investigation.

The documents name four people involved with making weekly cash bank transactions starting in 2008 that exceeded $25 million, according to an IRS investigation. That cash was reportedly stored in a vault within the plant and used to pay employees.

Those named in the investigation include James Brantley, the president and general manager of Southeastern Provision, as well as his wife Pamela, their daughter Kelsey and another employee named Priscilla Keck, documents state.

One affiant in the document was a special agent with the IRS assigned out of Johnson City who said bank personnel informed them that they were given a tour of the plant by Pamela Brantley. She allegedly revealed during the tour that employees were Hispanic and paid weekly in cash.

Also mentioned in the affidavit is a confidential informant working for law enforcement who worked undercover at the plant for four days.

The informant said he was never asked to complete paperwork or provide ID/documentation before being hired, and was told "not to worry" about using his real name -- which the document said confirmed the informant did not need to have a lawful identity to work at the plant.

The informant said he was hired on the spot and began working in spring 2017 -- getting paid $10 per hour weekly in cash. The informant said other workers at the plant supposedly made the same wage -- having to sign their names and mark hours worked into a log at the end of each day. However, one family member of a detained worker told WBIR her husband was only paid $6 an hour in cash.

The informant said many of the employees only spoke Spanish, noting nearly all of the employees he saw were Hispanic. Another unnamed meat processing plant in the area was identified by law enforcement where several of the employees reportedly used to work at but were fired because their identification paperwork was fraudulent.

Records also note that the informant saw production workers who were required to work overtime, but not compensated additionally for overtime hours due to the nature of their employment. The informant also said he saw employees working with harsh chemicals without appropriate protective equipment. The informant reportedly captured surveillance footage covertly as well.

An investigation into false tax returns revealed in the affidavit there was probable cause that Southeastern Provision paid approximately $8,421,210 in wages not reported to the IRS between 2013 and 2016 based on the cash withdrawals. The total wages/contract labor reported between those years ($2,470,825) were far less than the actual wages suspected to have been paid based on aggregate cash withdrawals ($10,891,677).

Further investigation into the wages of a handful of legally hired employees determined Southeastern Provision "grossly underreported" wages for those few employees -- pointing to the Brantleys' and others' personal income tax returns that did not include payments received in cash.

Some on-record employees in certain supervisory roles were even reported on W-2 filings to have made roughly $9 an hour, which was less than the $10 the unreported employees made. The investigation said, based on experience, these employees typically make more than that amount in similar positions. 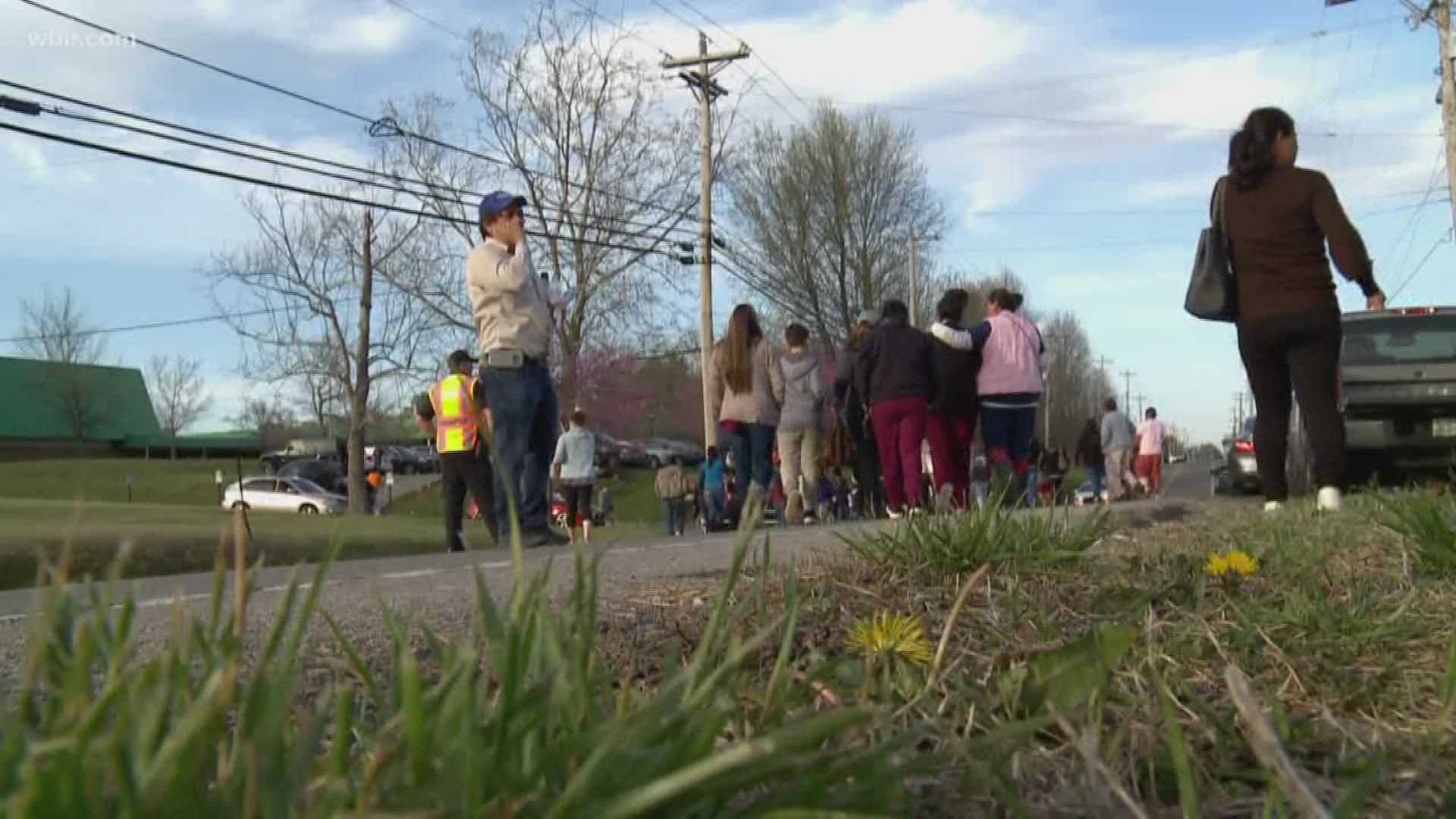 Dozens of people gathered outside the National Guard Armory in Morristown after federal agents executed a search warrant looking for people who may be in the country illegally.

A Channel 10 reporter was given a written statement by an ICE agent outside the armory, located on East Andrew Johnson Highway in Morristown.

The statement said the U.S. Immigration and Customs Enforcement's Homeland Security Investigations, Internal Revenue Service Criminal Investigation Division, and the Tennessee Highway Patrol executed a federal criminal search warrant Thursday. It did not say where the warrant was served, but a local pastor told 10News it was Southeastern Provision in Grainger County.

According to the statement, Homeland Security Investigations encountered individuals who may be subject to removal from the United States. If families need more information on specific individuals, it can be found on ICE's detainee locator online.

"Those individuals who are determined to be subject to removal will be administratively arrested and placed in removal proceedings, we cannot release specifics on the arrests," according to the statement provided by ICE.

Veronica Galvan, a leader in the local church community, said she has talked to several families who had been impacted, and up to 150 people may have been taken to the to be questioned by authorities. She told 10News that she had seen only 11 people come out so far.

Hamblen County school officials said they had several children that were impacted by Thursday’s events.

Superintendent Dr. Jeff Perry told 10News that some staff had to stay late to ensure that students got home safely or were picked up by a trusted adult, and bus drivers were instructed to make sure someone was home before they dropped them off. Dr. Perry said that all of the children involved are now safe with a family member or friend.

As Thursday night went on, people moved from Russellville Elementary to St. Patrick Catholic Church. Families returned to their homes for the night, but the church set up bedding, food and charging stations for families. 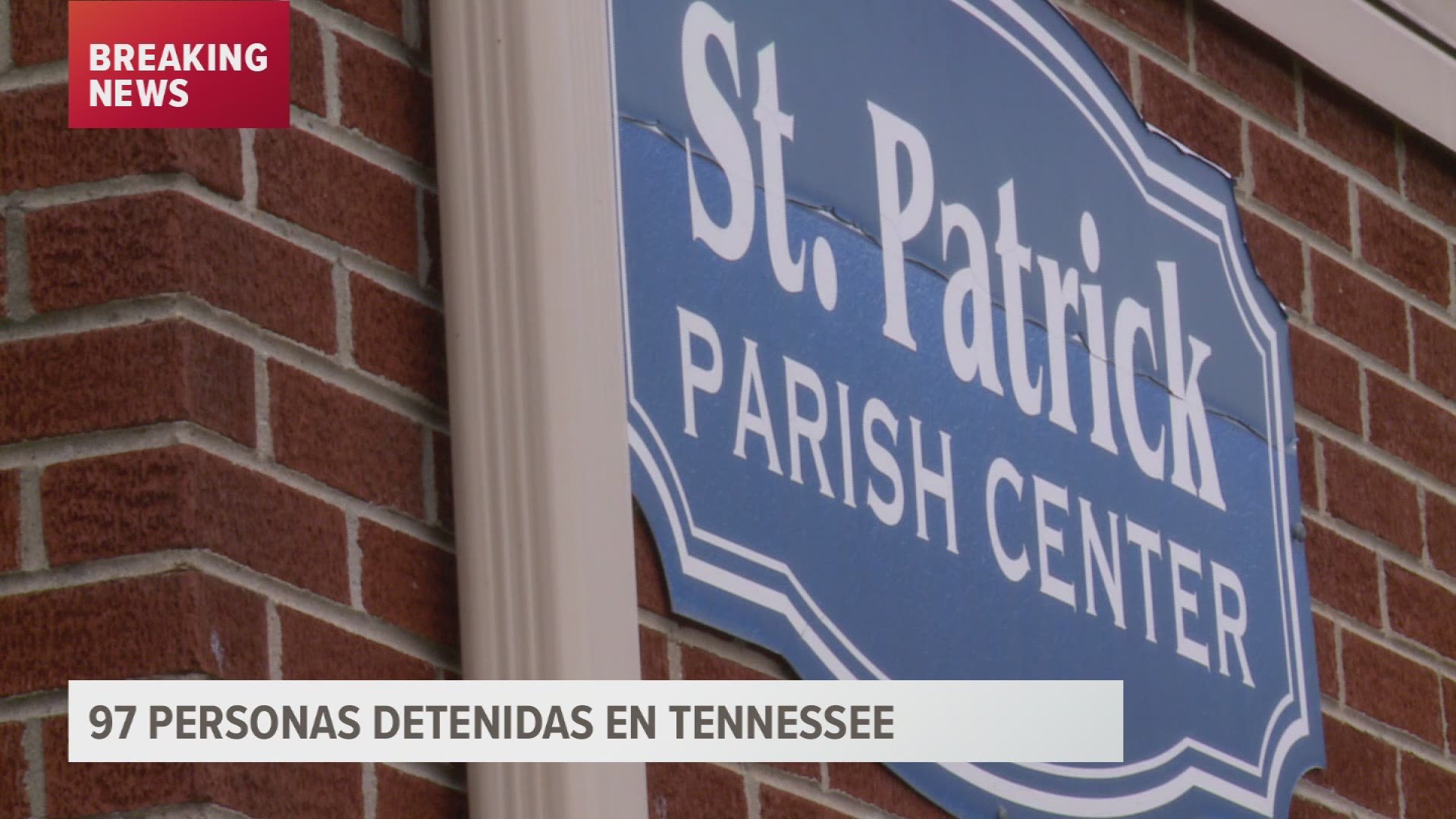 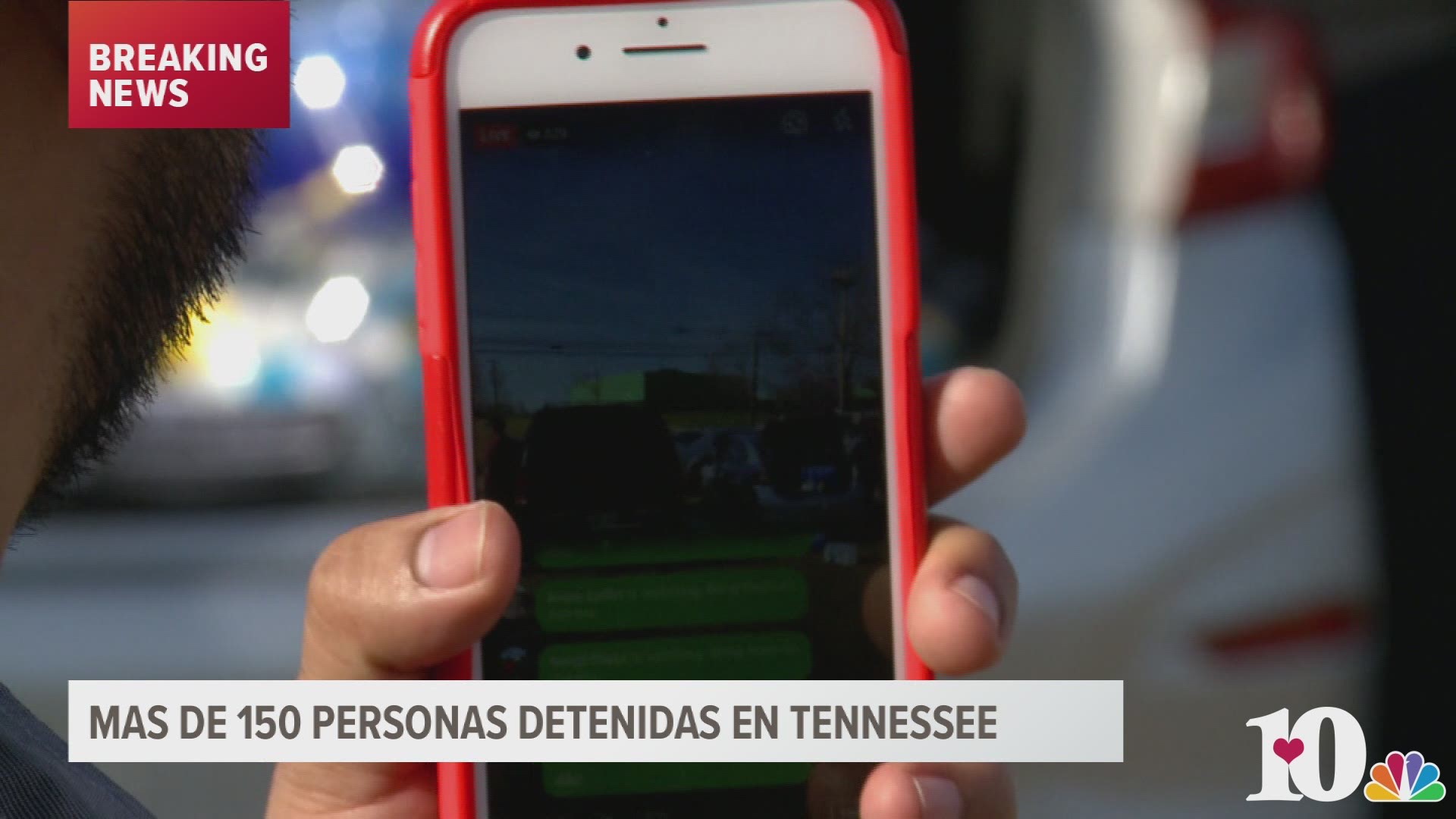