Kathy Gillcrist always knew she was adopted. It's only recently, however, that she's discovered she's probably an infamous killer's child. 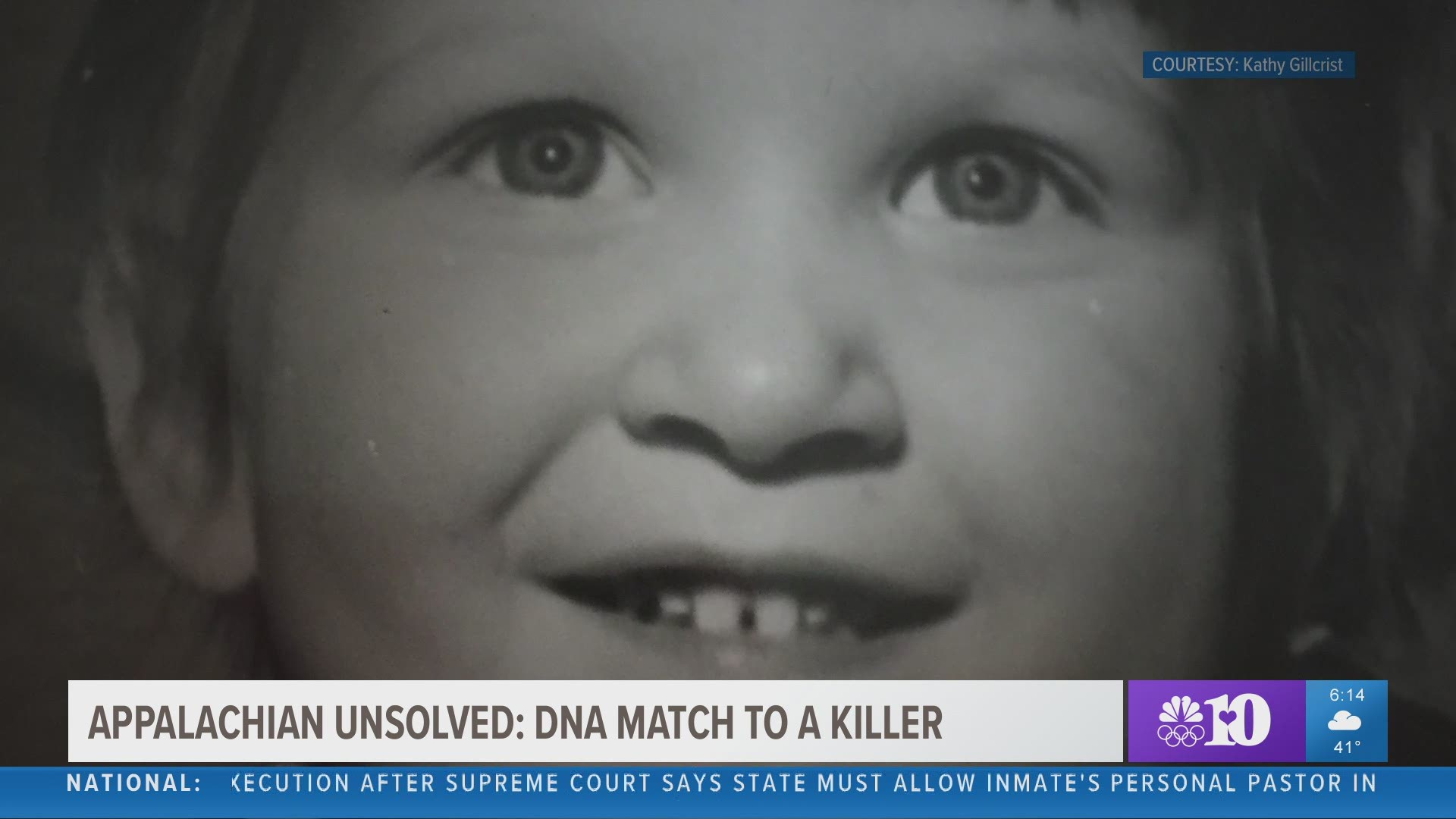 He’d bludgeoned and buried his three boys in a heap days earlier. His wife, Annette? Murdered first. His mother, Lobelia? Police say he killed her last.

But as the U.S. Foreign Service officer and fugitive fled the Elkmont campground that day in March 1976, he hadn’t completely wiped away history. He hadn’t, in fact, killed all of his blood children.

There was another Bishop child, one the infamous killer may never even have known about.

Kathy Gillcrist, 63, has only recently learned the startling news herself: The Massachusetts native who never knew her birth parents appears to be William Bradford Bishop Jr.’s biological daughter.

Bishop appears to have fathered her during a tryst with a New England woman while he was a student in college.

"As a young child I was always seeking fame and notoriety," Gillcrist told 10News. "And meanwhile my father....my father achieved everything that I wanted -- but in a negative way."

How Gillcrist, who has just written a book about the discovery, came to learn about her parentage is as curious as the Bishop murder mystery itself.

MURDERER ON THE RUN

WBIR highlighted the Bishop case in 2018 as part of its ongoing Appalachian Unsolved crime series.

The Yale-educated California native had dreams of being an ambassador with the U.S. State Department. But he harbored secret doubts and demons that may ultimately have done him in.

In early March 1976, Bishop, then age 39, killed his family in their Bethesda, Md., home and loaded their bodies into the Chevy station wagon. He drove through the night to remote woods in Tyrrell County, N.C., where he tried to bury the bodies and set them on fire with gasoline.

He drove on, ending up in mid March at the Elkmont campground in the Smokies, America’s most visited national park. Bishop abandoned the station wagon, still bearing evidence of his bloody crimes and containing grooming items and psychiatric medicine

Investigators can't say for sure why he picked the Smokies for his last known ride.

Brad Bishop is thought to have abandoned the family station wagon, in which he carried the bodies, in March 1976 at the Elkmont Campground near Jakes Creek Trailhead after murdering his family.Photo: Montgomery County Sheriff's Office

Then, Bishop vanished. Authorities are looking for him to this day.

For years he was on the FBI's Most Wanted list. The Montgomery County, Md., sheriff is still on the hunt.

Through the decades there have been some reported sightings in Europe. That makes sense because Bishop spoke multiple languages and had traveled often in the 1960s and '70s in Europe and Africa. He knew his way around.

Police once thought they had a lead on him in 2014 after exhuming a man in Alabama, but genetic testing ruled the corpse out.

His crimes have been covered extensively through the years -- by NBC's "Today" show, The Washington Post, and "Unsolved Mysteries", among others.

The FBI and Maryland police know a lot about Brad Bishop: his military background, his mounting financial problems, his bouts with insomnia, the anguish he expressed in private journals.

But they didn't know he may have fathered another child besides the three he slaughtered.

Brad Bishop is a fugitive accused of murdering his three sons and wife in March 1976. Photo: Montomery County Sheriff's Office

SPIT IN A TUBE

It started when Gillcrist spit into a tube and sent it off to 23andMe, the genomics and biotech company that tests your DNA sample and reports back what it finds. It can help users find blood relatives, links in their family tree, and learn insights about potential genetic variants in their overall health.

Gillcrist had always known she was adopted; it was only as she approached retirement a few years ago that she decided to try and learn more.

"Always there was this feeling in the back of my mind that, you know, maybe I'll find something I don't want to know." she said.

She knew her biological mother had given her up soon after childbirth in June 1957 to a Boston area center known for decades as the New England Home for Little Wanderers. It started in 1865 as a home for children orphaned by the Civil War.

Kathy was raised in a loving Stoughton, Mass., home south of Boston by Jack and Norma Sidebottom. Their name was unusual, but their parenting was very normal -- dull, even, she said. She grew up with an adoptive brother named John.

Norma used to tease Kathy because she was so different from the Sidebottoms. From the very beginning, it was clear she was a Type A, show-off, theatrical, adventurous, competitive, driven, bright person.

Gillcrist wanted to be an actress. She ended up pursuing a career teaching drama and English, having two daughters and living in Georgia.

And when it was time in 2017 to retire, Gillcrist decided to lift the veil on her genetic history. As she suspected, she was in for a surprise.

'ARE YOU SITTING DOWN?'

23andMe asks customers who are adopted if they'd like to find out any blood matches in their database. Gillcrist said yes and quickly learned about a third cousin named Susan Gillmor who lived in Maine.

Lucky for Gillcrist, Gillmor is a passionate and skilled amateur genealogist. She soon set about trying to figure out her cousin's birth mother and father.

"I turn into a pit bull once I have a thread to follow," Gillmor told 10News.

Gillmor had success first finding Gillcrist's birth mother. That's how she and Gillcrist are related.

The woman was from Maine, got married at 17, had a little girl, divorced and then to her father's dismay proceeded to have several more children, all of whom she gave up for adoption.

Eventually, she'd marry and have three more kids in New England. That family never knew about her earlier children. Whatever she knew about the men who fathered her children out of wedlock she didn't share with the family.

Gillcrist's birth mother was still alive when Gillmor figured out in 2018 who she was.

Gillcrist would go on to contact and communicate with her half-siblings. It took awhile for them to get over the shock.

But she never got to meet her birth mother. The woman died in spring 2020.

From diplomat to family killer: The Brad Bishop case

The hunt for Gillcrist's birth father took Gillmor much longer. She said she spent two years on the effort, sometimes enduring dead-ends and false starts in pursuit of clues.

Gillmor had Gillcrist submit a DNA sample to Ancestry.com, which she said has a broader database than 23andMe. She also uploaded Gillcrist's DNA data to GEDmatch.com, a data resource genealogists and law enforcement use when trying to decipher genetic histories.

Using Gillcrist's known genetic matches, Gillmor began the painstaking process of constructing family trees that might lead to the birth father. She looked for duplicate family names and clear patterns in Gillcrist's trees.

Credit: WBIR
Gillcrist said Bishop had a mole on one side of his face; she was one on the other.

She also looked for common geography.

She spotted a name -- St. Germain -- in the family trees of several cousins. She found another name that stuck out -- Corder.

The Bishops lived in California, and they had one child, William Bradford Bishop Jr.

"It all made perfect sense," Gillmor said.

The genealogist said she is "99.9 percent sure we've got the right father."

Gillmor typed Bishop's name into Facebook and was astonished at the information that popped up.

Then she called Gillcrist down in Georgia.

"Are you sitting down?" she asked.

BE CAREFUL WHAT YOU WISH FOR

Gillcrist wishes she could compare her DNA to genetic evidence gathered from the Bishop crime scene in Maryland. When Bishop killed his family, he spilled a lot of blood.

So far, she said, she's not had any luck.

She's spoken with Montgomery County authorities, but they're not sure they could share the information. And while her story is interesting, they gave her the impression it's not particularly relevant to their murder investigation.

WBIR reached out to the Montgomery County sheriff but hadn't heard back as the story prepared for air.

No matter to Gillcrist. She's convinced she's found her birth father, and she said the resemblance in photos of the two -- and that of Bishop's mother Lobelia -- appear obvious to her.

Bishop as he may look today

She sees him, too, in her own personality traits: Her drive to succeed, her wish to be recognized, even her sometimes anxious moments.

Coaxed on by friends and stuck in the house because of COVID-19, Gillcrist decided to write a book about her journey and discovery. It's called "It's In My Genes" and it's available on Amazon.

Gillmor contributed her own chapter, explaining her genealogical detective work.

Gillcrist, who now lives in North Carolina, hopes some day to visit Bishop's last known spots -- the remote woods where he dumped the bodies of her apparent grandmother and half siblings, and the Elkmont parking lot where he parked the station wagon for the very last time.

Credit: WBIR
The 1974 Chevy station wagon Bishop left behind in the Smokies.

She thinks her father is still out there somewhere.

While Gillcrist is content about her background, she wants anyone thinking of getting a genetic test to know that there can be consequences. You can learn things you didn't expect.

"You've gotta take DNA searches seriously -- how it can upset other people's families," she said. "I mean, I traumatized several people just by popping up."