BCSO: Three scammers who pretended to be family member asking for money arrested

The Blount County Sheriff's Office said the scammers would ask for debit card information or tell people with withdraw cash for bail money or medication. 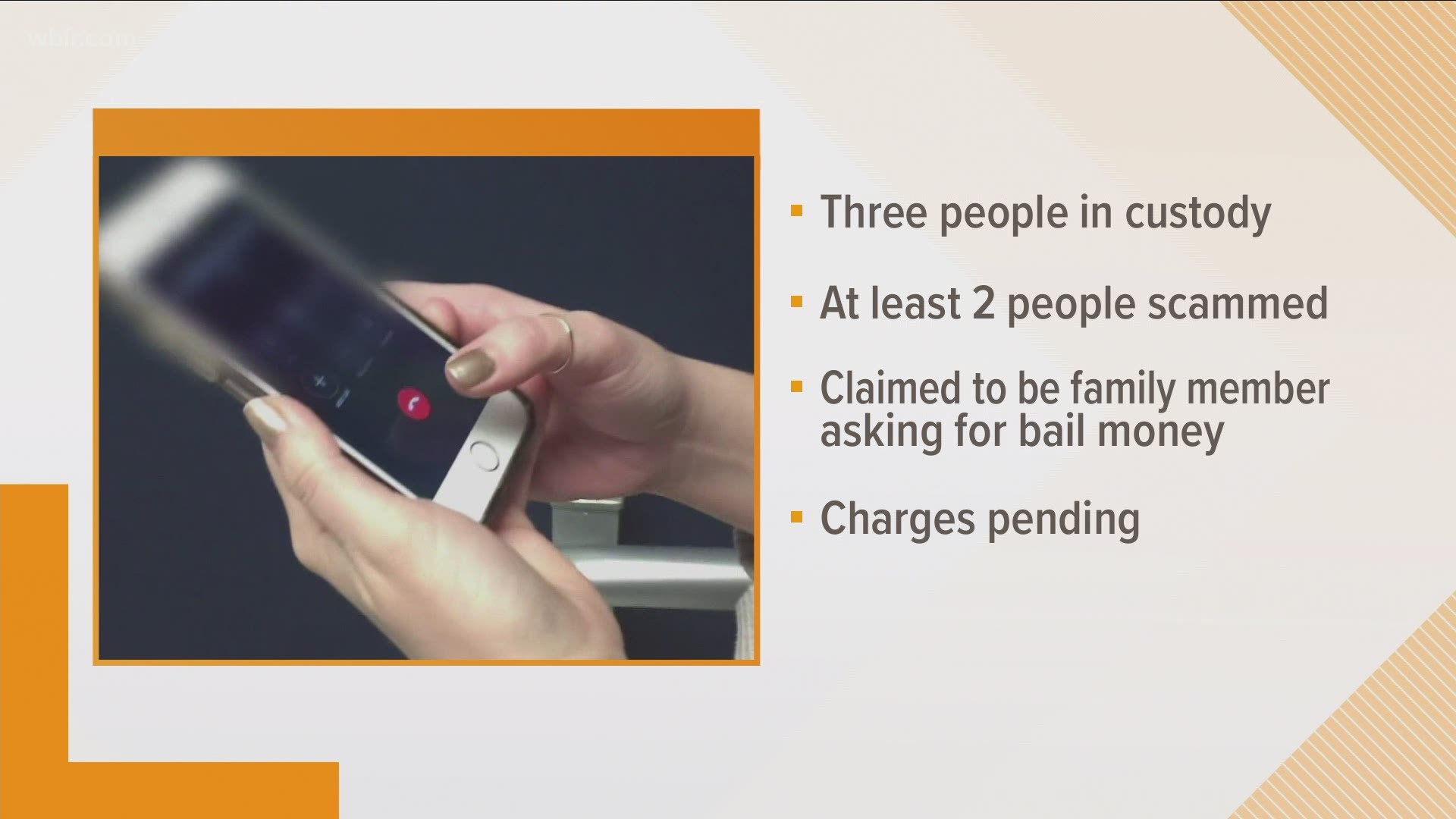 BLOUNT COUNTY, Tenn. — UPDATE 10 p.m.: The Blount County Sheriff's Office said three people were arrested in connection with a scam that victimized people led to believe they were helping family members in need.

They were in custody in Loudon County, according to a release from officials. At least two people each in Blount and Loudon counties were scammed out of thousands of dollars, police said.

The three people who were arrested have been taken to the Loudon County Jail and charges are pending, according to police.

The BCSO and the Loudon County Sheriff's Offices are working together to stop the scam since both said they received several complaints about it in the past few days. They are asking people who may have been victimized by the scammers to report it as they work to bring charges against them and find others who may be involved.

“This is the first scam case that I am aware of, that many of us are aware of, that the perpetrators actually come to the victims' residences to claim the cash they’re stealing," said Matt Fagiana, the spokesperson for the Loudon County Sheriff's Office. "That’s a tactic from scammers we don’t usually see and we are extremely concerned by that.”

The Blount County Sheriff's Office is warning people about a new scam victimizing people who think they are helping a family member.

Police said the scam involves a scammer calling people claiming to be either a family member in trouble who needs money, or an attorney demanding money. There have also been calls where scammers pretended to be law enforcement officers, officials said.

Sometimes, the calls involve the scammer pretending to be a family member pleading for money to cover bail after a run-in with law enforcement. They may also ask for money to pay for needed medication, or they may say they need to pay a hospital bill immediately or they will be arrested.

Police said the calls usually start out with the scammer saying, "Hi grandma (or grandpa), do you know who this is?"

They sometimes ask for debit card information, but police said they received a report that encouraged a victim to withdraw money and deliver it in person.

In one case, a victim said she withdrew $14,000 cash from her bank account and the scammer said they would meet her to pick it up. The victim later called and reported it to the Blount County Sheriff's Office when she realized it was a scam, according to a release from officials.

"The judicial system will not call and say, 'Hey, we need you to go get money from the bank for bail money,' and actually have someone come to the residence and pick it up," said Lieutenant James Trentham with BCSO. "That's not how the system works."

He also said the sheriff's office believes the scammer, or scammers, could be using landline telephones to make the calls. They are working with the Loudon County Sheriff's Office about similar scams.

They also are reminding people that law enforcement will never call and ask for money over the phone.