The Knox County jury deliberated just over an hour to reach its decision. He was found guilty of all 10 counts he was charged with. 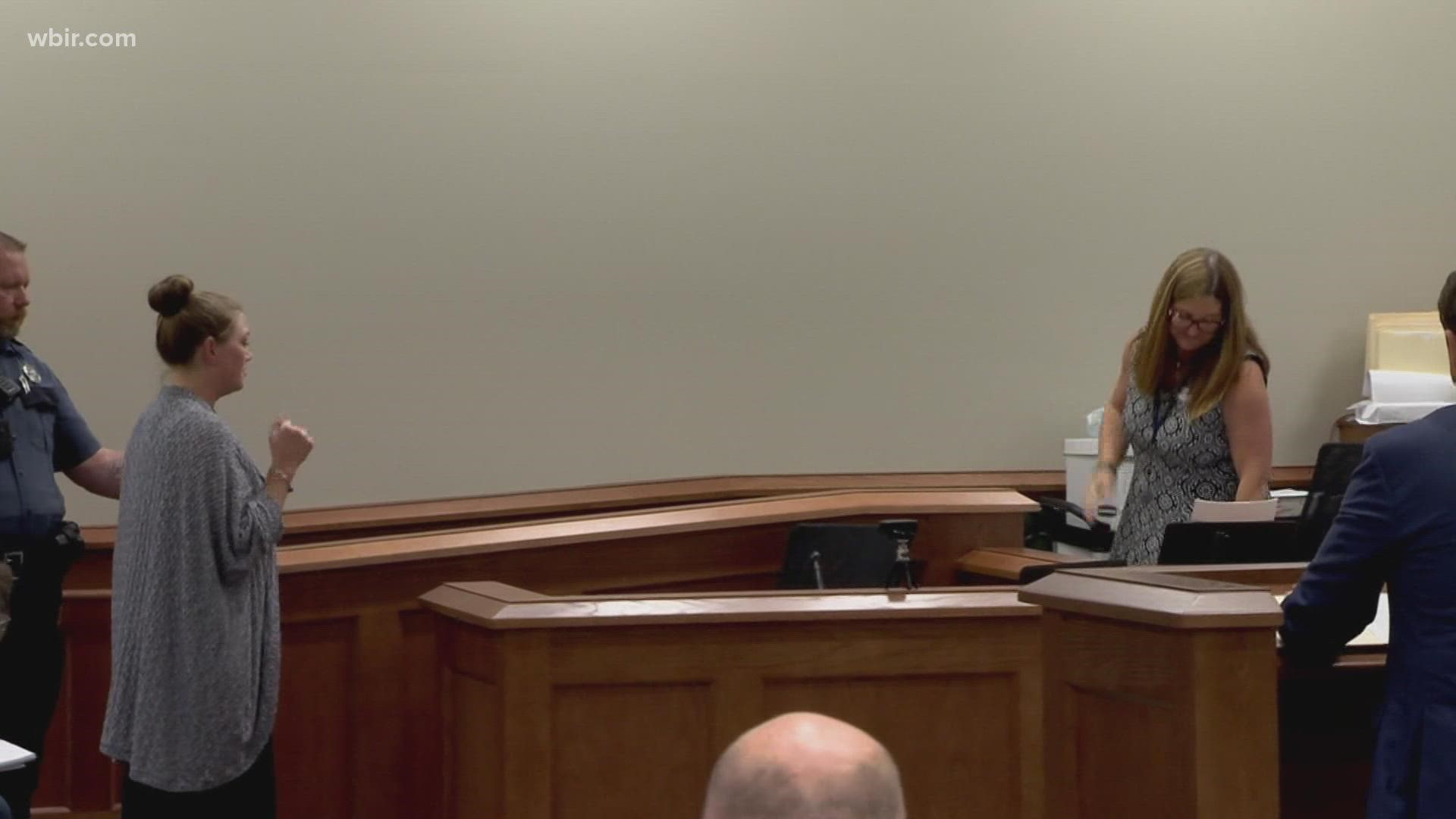 The jury deliberated just over an hour Thursday to reach its decision. Wiggins was found guilty on all 10 counts for which he was charged.

They'll now shift into considering whether he should be executed for murdering Baker.

The defense did not call Wiggins to take the stand and testify in his own defense.

The defense team didn't deny that Wiggins killed Baker. The question, they've argued, was whether the act was premeditated.

Prosecutors, in their closing arguments, passionately revisited their evidence that Wiggins created a “ruse” during the 2018 traffic stop, then ambushed and ultimately executed Baker.

The defense in its last pitch to the jury said Wiggins acted without what the law calls reflection and judgment.

“Your decision has to be done with reflection and judgment. You have to also have those emotions put to the side so that you do what’s right, not just what’s vengeful,” David Hopkins, Wiggins’ attorney, told the jury during closing arguments.

“The thin blue line was burned on that day. The thin line of justice does not need to be burned by the actions of the defendant,” said District Attorney General Ray Crouch.

Jurors were picked from Knox County last week to hear Wiggins' case. They've been sequestered in Dickson County, with limited contact with the outside world.

Now that they've convicted Wiggins of murder, they'll hear evidence in a mini-trial designed to determine if Wiggins should be put to death or perhaps face life in prison without the chance for parole.

Judge David Wolfe told the new jurors to pack their bags and get ready to head for the county west of Nashville on Sunday. The trial starts Monday and is expected to last a couple weeks.

Dickson County authorities came to Knox County to pick a jury because of extensive publicity back home. They've been in town all week talking to potential jurors.

Steven Wiggins is accused of shooting to death Dickson County Sgt. Daniel Baker in May 2018 after Baker went to investigate a suspicious vehicle on a rural Dickson County road. Authorities allege Wiggins shot the deputy six times, pulled his body in the cruiser and later set his body on fire.

The homicide was captured on Baker's bodycam equipment.

As part of their screening, the Knox County panel was closely questioned about their thoughts on possibly having to impose the death penalty if they convicted Wiggins of Baker's murder.

Sixteen people were chosen but when it comes time to deliberate only 12 will take part in trying to reach a verdict. As is routine, extra panelists are picked in case someone suddenly has to stop their jury service in mid trial.

The jury will be sequestered in Dickson County, meaning they cannot go out and about freely, will have limited phone use and will have to stay together under watch by court officers until the case concludes.

PREVIOUS STORY: A panel of Knox Countians is being picked this week to decide the fate of a Tennessee man facing the threat of the death penalty in the 2018 killing of a Dickson County, Tenn., deputy.

Preliminary jury screening began Monday morning in Knox County, with Dickson County Judge David Wolfe, District Attorney General Ray Crouch and a team of defense attorneys quizzing potential jurors one by one on their thoughts about the death penalty, murder and factors that could mitigate a crime.

Crouch is seeking death for Steven J. Wiggins, 34, in the 2018 killing of Sgt. Daniel Baker along a rural Dickson County road, west of Nashville. Wiggins shot Baker six times, put his body in his cruise and shortly after set his body on fire, authorities allege.

Twenty-five Knox County residents were summoned Monday morning to the City County Building, and another group of 25 checked in at 12:30 p.m. Monday. A similar process was expected Tuesday.

Dozens likely will be interviewed before Wolfe deems there's a sufficient number assembled to begin questioning the potential jurors as a group. That could begin by Thursday or Friday.

Knox County was selected for the jury pool because the case has drawn so much attention in Middle Tennessee.

Wolfe told potential jurors that once the official panel is chosen, they could be heading Sunday to Dickson County to begin hearing proof. The jury will be sequestered, and the trial is expected to last two or three weeks.

"We need people who can weigh all the evidence," the judge told one potential panelist Monday morning.

Jury plans have quietly advanced behind the scenes. A pool of Knox Countians tapped for potential service first were asked more than a year ago to fill out questionnaires about the case. Then, COVID-19 hit, creating huge delays in the justice system across Tennessee. Wiggins himself contracted the virus.

Some of the potential jurors quizzed Monday morning had to be reminded of their responses to the questionnaire because it had been so long since they filled it out. The survey asked questions such as their thoughts on the appropriateness of the death penalty and whether a person's mental health or childhood could be weighed when deciding on a sentence.

If convicted of murdering Baker, Wiggins faces a potential punishment of death, life without parole or a life sentence with a minimum 51-year term. If Wiggins is found guilty, the same group of Knox Countians would shift to a punishment or sentencing phase, a kind of mini-trial at which both Crouch and the defense would present evidence.

On Monday morning, several potential jurors signaled to Wolfe, Crouch and defense attorney David Hopkins they were willing to consider all the evidence presented in deciding whether Wiggins should be executed upon conviction.

A couple people, however, were excused. A woman said she didn't think she could give weight to a person's personal history, including past difficulties, in considering whether he deserved leniency.

A man was adamant he couldn't vote to impose death against Wiggins.

Wiggins, who is in custody, sat during juror questioning at the defense table, flanked by his legal team.

Authorities allege Baker came across Wiggins and Erika Castro-Miles sitting in a stolen Saturn in May 2018. The sergeant was checking on a report of a suspicious vehicle.

After he ordered them to get out of the vehicle, Wiggins fired several shots from a .45-caliber pistol at Baker, according to authorities. Baker tried to seek cover but collapsed on the ground, where Wiggins killed him with shots he fired at close range, according to investigators.

Wiggins set fire to Baker's body and his cruiser, according to authorities.

The fatal encounter was captured on Baker's bodycam equipment, according to authorities.

Castro-Miles has been charged separately in the Dickson County case.

Federal authorities in the Middle District of Tennessee also are seeking death for Wiggins. He faces indictment in federal court on carjacking and firearms violations that led to Baker’s death.

WE HAVE STEVEN WIGGINS IN CUSTODY! Wiggins was wanted for the murder of Dickson County Sheriff’s Ofc. Sgt. Daniel Baker. Trooper Kevin Burch of the THP Lawranceburg District was the arresting officer. Trooper Burch joined THP in 2017. Wiggins was taken into custody in Hickman CO. pic.twitter.com/EE5VthodW9