Derrick D. Thompson was interviewed after the robbery at the Regions Bank on Broadway. 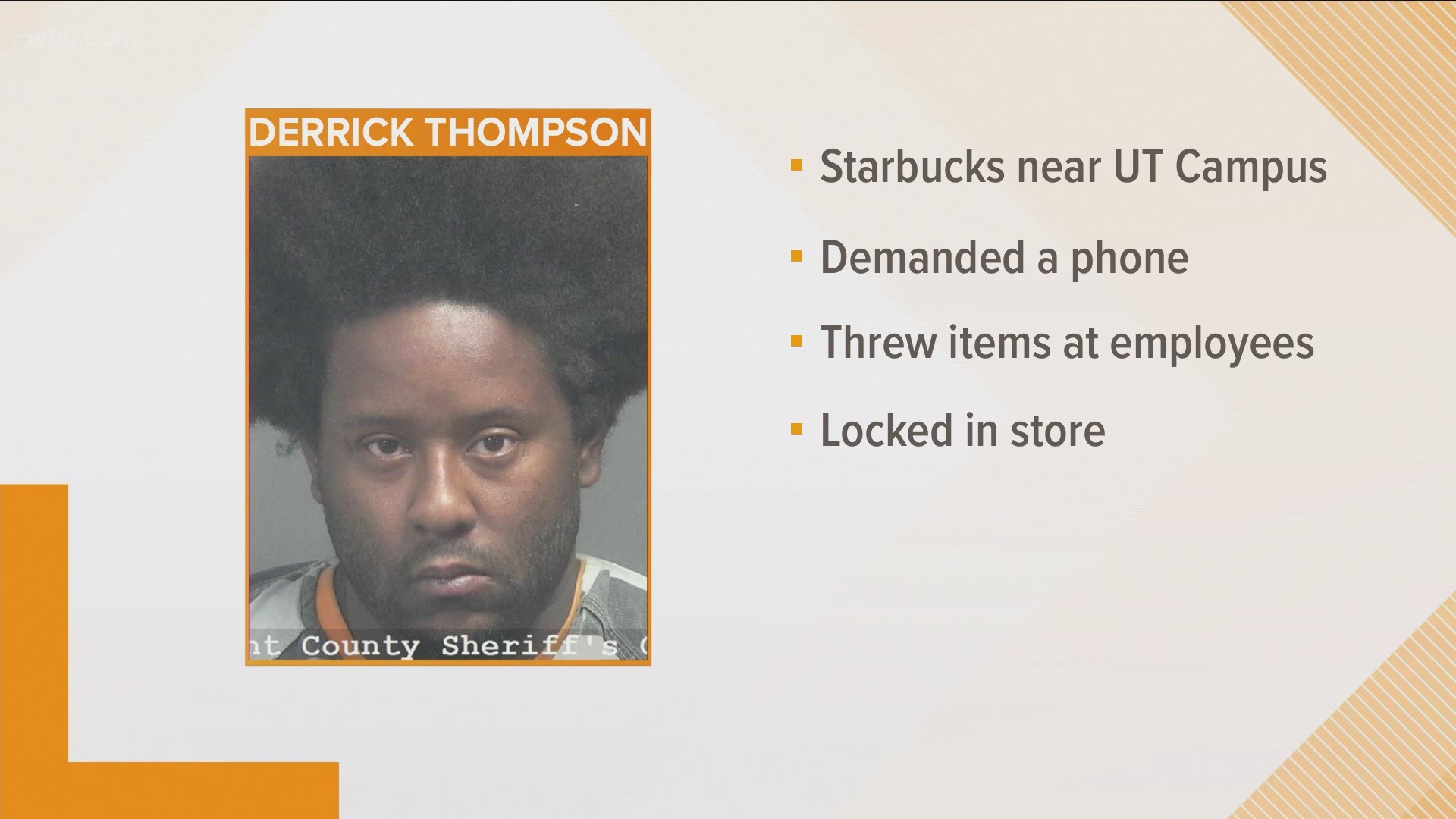 KNOXVILLE, Tenn. — UPDATE: The man identified as the robber Wednesday of the Regions Bank on Broadway took over the Starbucks on the Cumberland Avenue Strip the day before, records state.

The FBI on Thursday identified the suspect as Derrick D. Thompson, 33, of Clarksville.

He's being held on a federal complaint in connection with the Wednesday morning robbery of the Regions at 707 N. Broadway.

Credit: BCSO
Derrick Thompson's mugshot in Blount County, where he's being held for the federal government.

Thompson was found with about $1,350 in cash after Knoxville police officers chased him down. He was driving a Ford SUV he'd taken from one of the bank employees, the FBI alleges.

After his arrest following the chase that included parts of Broadway and Hall of Fame, Thompson complained: "The only thing I didn't get to do was spend the money," federal records state.

Thompson told FBI agents he decided to rob the bank while walking by it.

The day before, authorities allege, he vandalized and took over the Starbucks at 2021 Cumberland Ave. near the University of Tennessee campus.

Thompson walked into the store and demanded a phone. He went over a counter and advanced toward employees "and threw miscellaneous consumable goods around the store, destroying them (approx. 300)," a KPD warrant states.

He threw a milk carton that hit an employee in the head, records state.

The manager escorted the employees out of the store, according to the warrant.

Thompson then "locked all the doors of the business, taking it over," a warrant states.

When police arrived they found Thompson alone inside the Starbucks with the doors locked. He opened the door and police took him away Tuesday.

Thompson is charged with assault and vandalism among other counts in the incident, records state.

The next day, authorities allege, he robbed the bank.

Authorities were interviewing a bank robbery suspect Wednesday after someone held up a North Knoxville bank and drove off with an employee's vehicle before being caught by police, according to the FBI.

Knoxville Police Department officers and FBI agents went to the Regions Bank at 707 N. Broadway about 9:45 a.m. Wednesday on the robbery call.

"According to the preliminary investigation, the suspect entered the bank and confronted the employees while demanding money and car keys from at least one employee. The suspect fled the bank in an employee’s vehicle," according to a release Wednesday from the FBI.

Officers saw the vehicle, chased it and detained the suspect.

Charges are pending. The unnamed suspect was being interviewed by FBI agents.