Steve Waithe, 28, is facing charges for trying to trick female student-athletes into sending him nude photos and allegedly cyberstalking at least one of them. 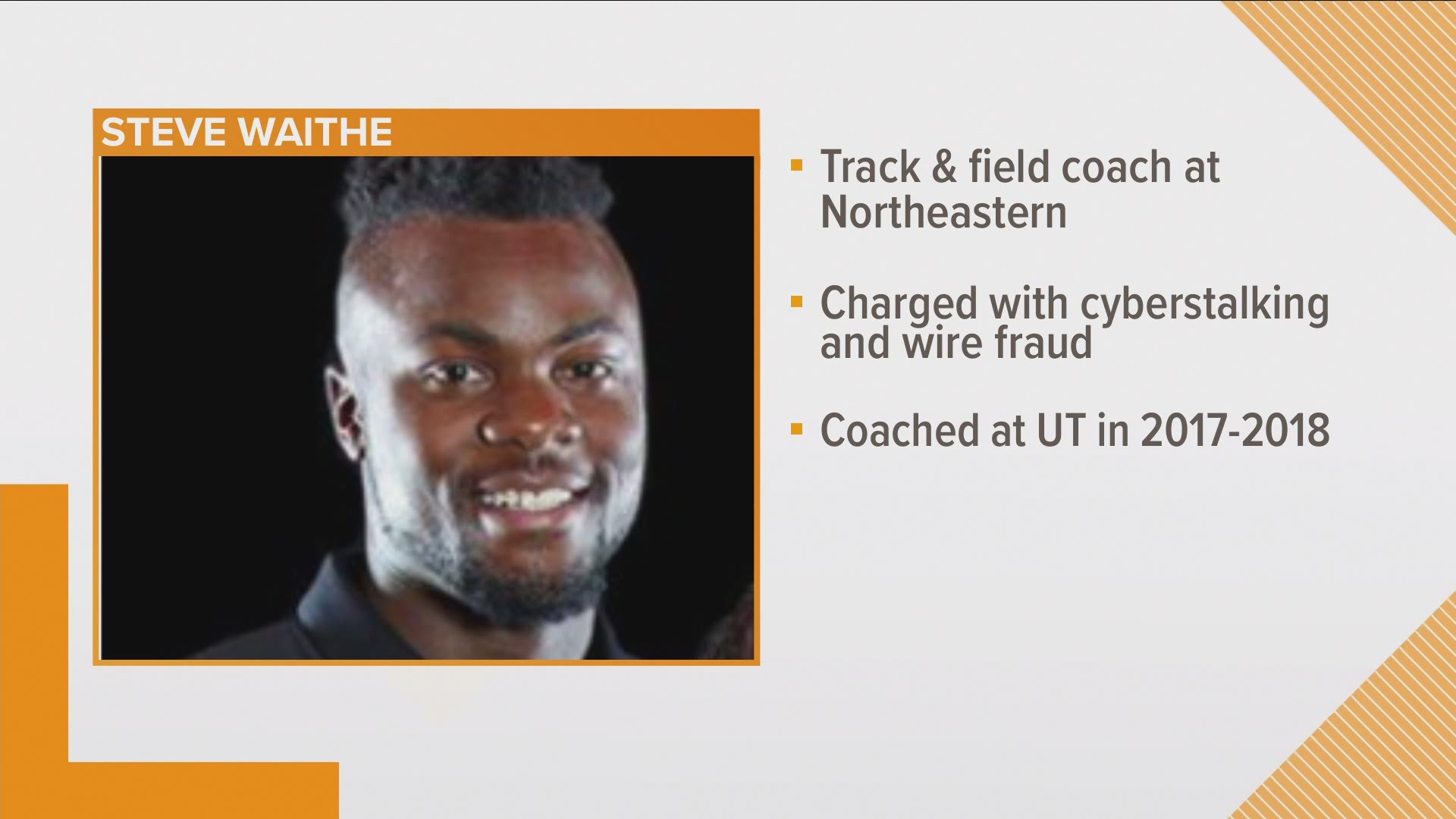 BOSTON — A former University of Tennessee track and field coach was arrested and charged on Wednesday in Chicago for trying to trick female student-athletes into sending him nude or semi-nude photos and allegedly cyberstalking at least one female student-athlete, according to a release from the Department of Justice.

Steve Waithe, 28, was charged with a criminal complaint on one count of cyberstalking and one count of wire fraud, according to the DOJ.

Waithe was employed as a track and field coach at Northeastern University in Boston from October 2018 to February 2019, according to documents. It is alleged that during that time, he frequently requested to use female athletes’ cellphones under the pretense of filming their form at practice and at meets. At times, he was observed “scrolling through” the phones.

The department said starting around February 2020, Waithe used fake social media accounts and reached out to the student-athletes saying he had found compromising photos of them online and offered to “help” get the photos removed from the internet. He allegedly requested additional nude or semi-nude photos that he could use for “reverse image searches.”

Waithe also allegedly cyberstalked at least one female Northeastern University student-athlete through social media messages, an anonymized phone number and intrusion into her Snapchat account from at least June 21 to Oct. 3, according to the release.

The DOJ said he also used personas of “Katie Janovich” and/or “Kathryn Svoboda" to email prospective victims for “athlete research” or “body development” studies. In these emails, he would request for the victims to send photos of themselves in a “uniform or bathing suit to show as much skin as possible."

Investigators are reported to have identified at least 10 victims from this scheme and found over 300 photos of them in his email accounts.

The University of Tennessee said Waithe was a coach for the 2017-2018 track season before leaving for another career opportunity.

There were no reports of possible misconduct from his time at UT in a preliminary review of their files following the allegations, according to a statement from the university.

"We take any allegation of misconduct seriously and would urge anyone who may have been a victim of his alleged behavior to contact the FBI through https://fbi.gov/TFCoach," the university said in the statement.

He also worked as a track and field coach at Penn State University, Illinois Institute of Technology and Concordia University Chicago.

He made an initial appearance in federal court in the Northern District of Illinois on Wednesday and will appear in Boston at a later date.

The Department of Justice is asking any other potential victims in this case to visit: https://www.justice.gov/usao-ma/victim-and-witness-assistance-program/us-v-steven-waithe