Hiker who killed one, wounded another on Appalachian Trail deemed insane, to be committed

James L. Jordan will get treatment at a psychiatric institution and won't get out until he's deemed to no longer be a threat to the public at large. 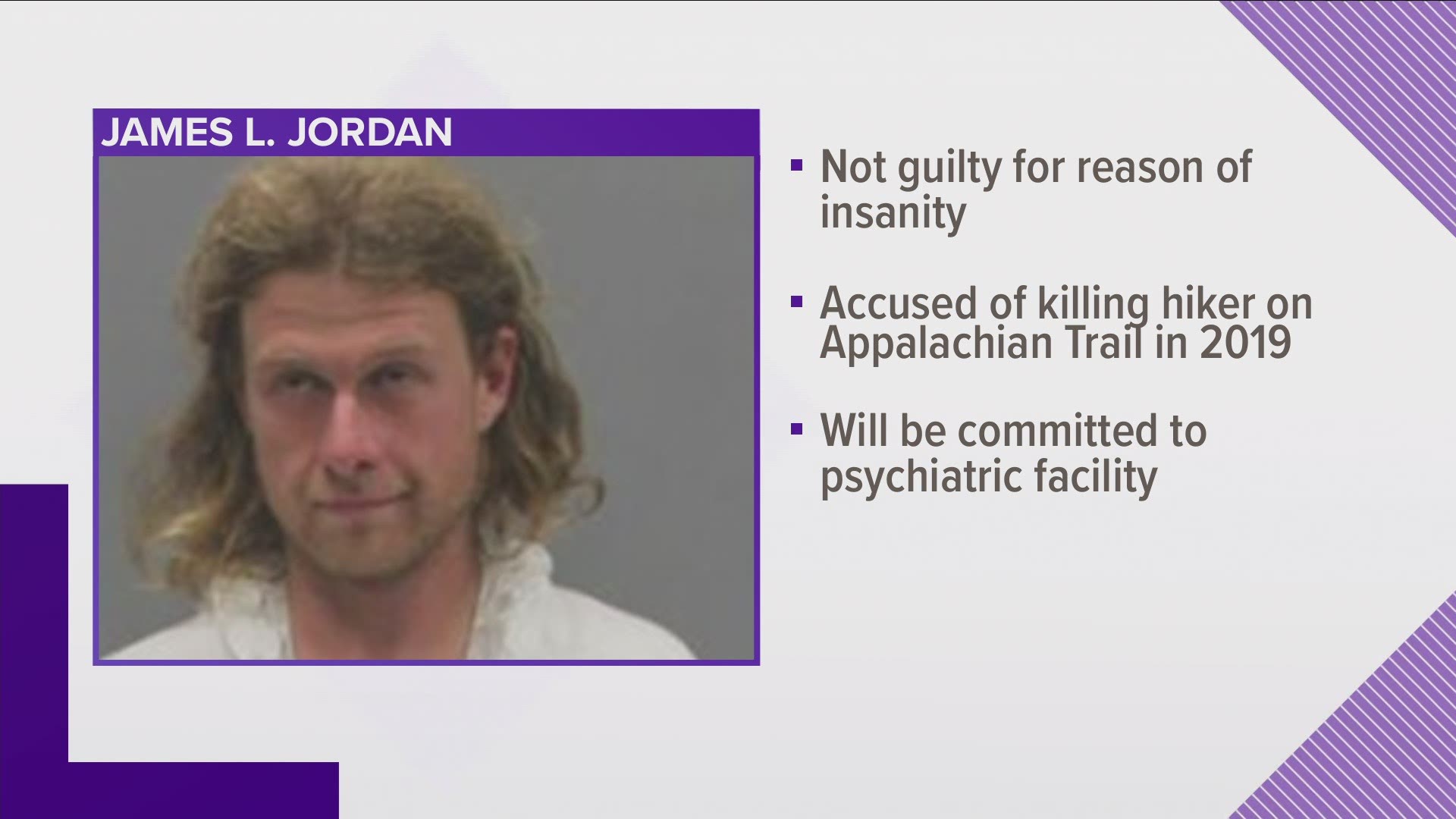 An Appalachian Trail hiker who killed a man and seriously wounded a woman in a knife attack in May 2019 in Virginia is insane and will be committed to a psychiatric center for treatment, a U.S. District Court judge in Virginia found Thursday.

James L. Jordan, 32, won't be freed until he's deemed to be no longer a threat to the public. He had been charged with murder.

The New England native appeared Thursday morning in federal court in Abingdon before Judge James P. Jones. As part of the hearing, the court heard an apology from Jordan

Jordan, who used the name "Sovereign" in hikes on the trail through Tennessee and Virginia before the attacks, has a severe psychiatric illness, his legal team said in a statement Thursday.

"We know today, and every day since May 10, 2019, has been very difficult for the victims in this case and their families.  Mr. Jordan is deeply remorseful for the profound sorrow he has caused.  He regrets that his lifelong battle with mental illness ultimately resulted in this trauma and loss for innocent hikers and their families," the statement reads.

Jordan attacked a group on the trail in Wythe County, Va. on May 2019.

He killed hiker Ronald Sanchez, of Oklahoma, an Iraq War veteran. He stabbed and wounded hiker Kirby Morrill of Canada.

Jordan did "enormous damage" when he killed Sanchez, Sanchez's girlfriend Brenda Kelley wrote in a letter to the court.

"Please consider the human toll this horrible act of violence has caused, not just to Ron, but to those who loved him so dearly. Please consider our needs and our safety, as well as those he has already injured and terrorized and those he may injure in the future, and their loved ones, and keep James Jordan locked away," Kelley wrote.

She said she feared he would return to violence if he was ever set free and stopped taking psychiatric drugs to counter his mental illness.

Elizabeth Sanchez, the victim's former wife, wrote that he'd lived through three Iraq deployment as well as an assignment to Kosovo.

"He survived so much," she wrote. "It is unimaginable to think how he died, and alone, I have gone over it in my head thousands of times. Wondered about those last moments and what he would have been trying to do to save himself. What he would have been thinking about and knowing how painful his death would be to his mother."

Morrill described what it had been like for her to be "stabbed in the forest and left for dead by a depraved lunatic."

Credit: SWV Regional Jail Authority
James L. Jordan, the accused AT attacker, is being held in an Abingdon, Va., jail.

She wrote that she had suffered nerve damage and had to undergo physiotherapy as a result of what he did to her.

Now she must endure questions from people asking about her injuries.

"I have been asked if a chainsaw kicked back into my face, or if I had a major mountain biking accident. A man once asked me if I “got chewed on by a shark.” I’ve only just turned 30, so I should have the pleasure of hearing remarks like those for a long time to come," she wrote.

"And I remember his eyes when I tried to run, and when I looked back over my shoulder. They are burned into my mind. I see them when I cannot sleep at night: nights like last night, as I contemplated writing this letter." 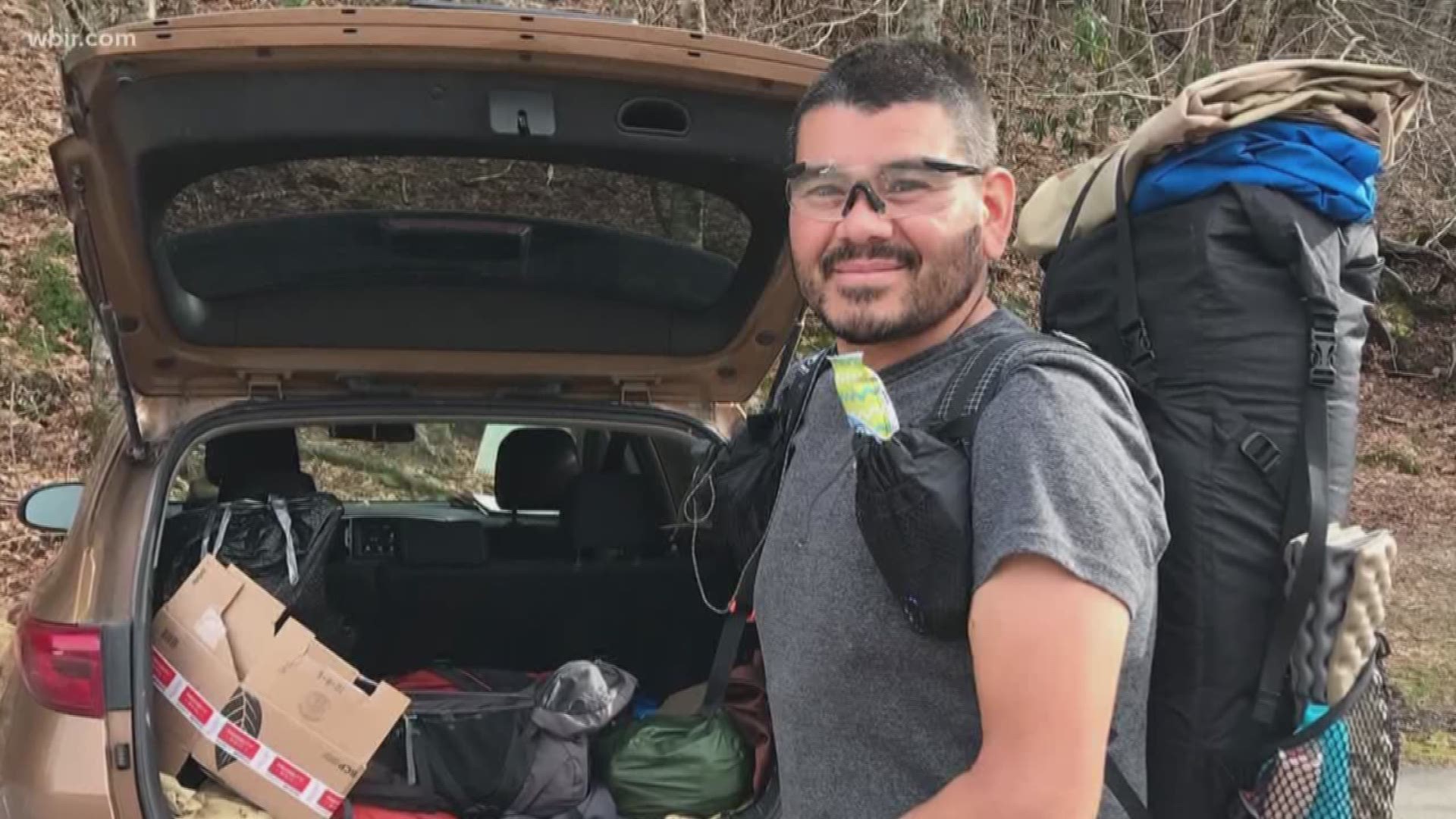 Morrill also wrote she can still hear Sanchez, asking her to wait for him, as she staggered down the trail to get help.

"I pride myself on practicality, and while I believe that my actions that night were objectively the best choices I could have made given the situation that was thrust upon me, I will never forgive myself for not trying to go to Ron before making my way out of the forest."

In making his finding that Jordan was not guilty because he's insane, Judge Jones reviewed a plea agreement and the defendant's agreement to waive a jury trial. The court also had a psychiatric report to review. During prosecution of the case, Jordan was treated for a time and evaluated at a federal center in North Carolina.

Credit: WCYB
James L. Jordan, accused in the Appalachian Trail murder of a hiker over the weekend, walks to court Monday morning during an appearance in Abingdon, Virginia.

"In this case, the prosecution’s expert noted that Mr. Jordan’s psychiatric illness was consistently and appropriately treated, likely for the first time in his life, when Mr. Jordan was found to be incompetent to stand trial and sent to a medical facility for restoration of his competency," the defense team's statement reads.

"Mr. Jordan understands that continued treatment and medication will be required for the rest of his life.  Most importantly, he would like the victims and the family of Mr. Sanchez to know that he thinks about the damage he caused every day and that he would do anything to change the past if he could."