In the U.S., someone is sexually assaulted every 73 seconds, according to the McNabb Center. Less than a quarter of those assaults are reported to police. 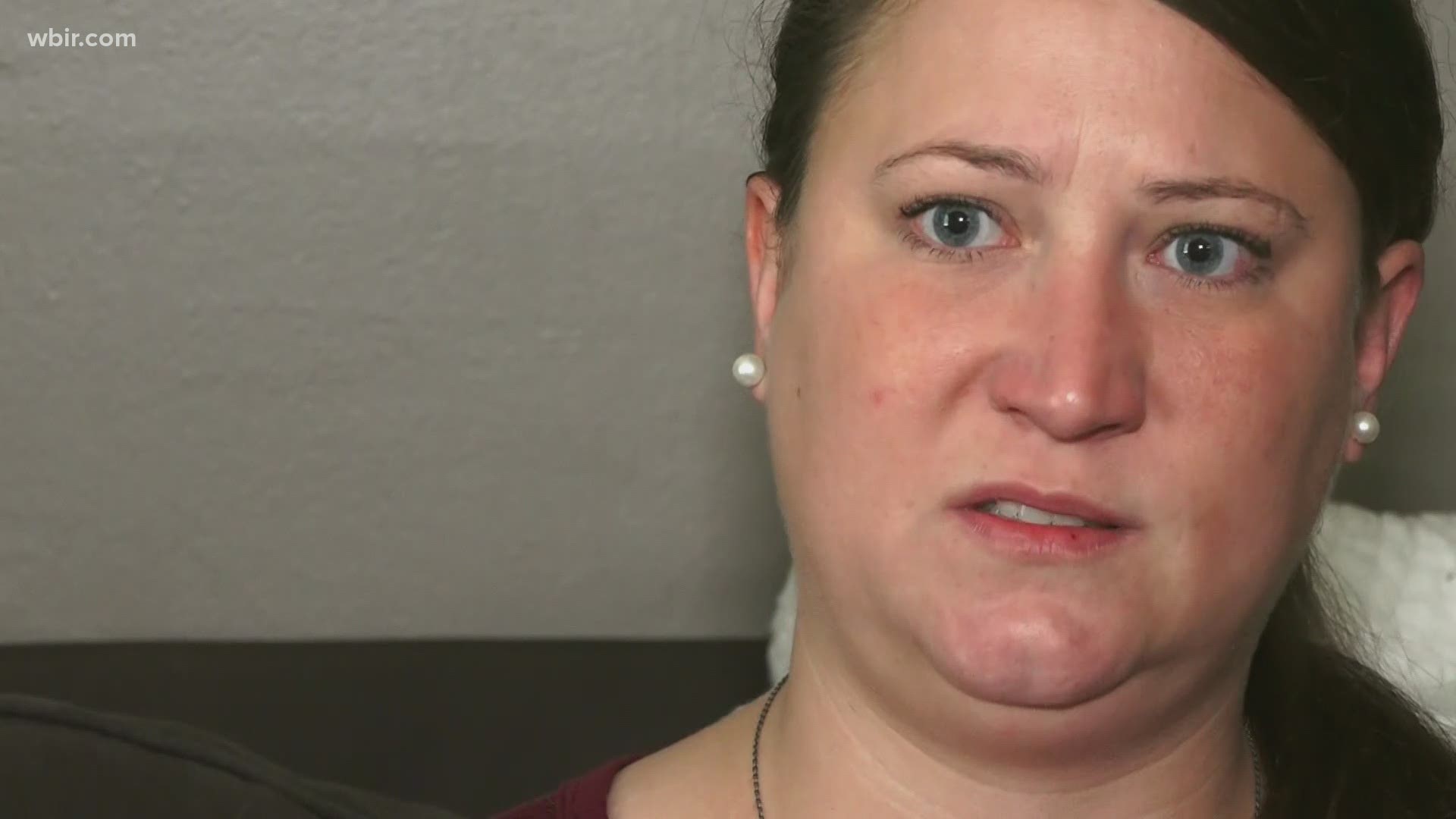 KNOXVILLE, Tenn. — April is Sexual Assault Awareness Month, dedicated to stopping assaults and letting survivors know there is help for them.

The McNabb Center reports that every 73 seconds, someone in the U.S. is sexually assaulted and just under a quarter of those assaults are reported to law enforcement.

*The following details are graphic and may be triggering for some.

On January 21, 2021, Trent was at home with her dogs. It was just a few days before her 30th birthday, which she was looking forward to celebrating.

She lives alone in a small home in Knoxville.

She had fallen asleep on the couch. The side door was left unlocked, and around 3 a.m. she woke up.

"My dogs were laying with me, we're all cuddled up. All of a sudden, two of them got up, ran into the kitchen," she said.

She followed them and found a man standing in her kitchen.

"He had on a black hoodie. He had the hood pulled over his head. He was wearing black sweatpants. And I jumped. And then he just kind of grabbed me," she said.

Trent first thought maybe it was a friend playing a trick on her. She couldn't tell who this man was. The only light in the home was coming from her TV in the living room.

She said he sent two of her dogs outside. An older dog hid, leaving the two of them alone.

"He would grab me by my nose like this, and I said, 'quit this isn't funny. Stop.' And he drags me into my bedroom around the corner," said Trent.

She quickly realized this was a stranger attacking her in her own home.

"And he just whispered in my ear, 'stop struggling so hard. This will only take 30 seconds.' And at that point, I really started to panic," she said.

His hands were over her mouth and nose, so Trent bit the man's hand — hard. Then a finger. However, she said it only made him more aggressive.

"He full-on took his other hand, grabs me by my throat as hard as he could," she said.

He knocked the wind out of her. She described the sensation as being trapped underwater, unable to breathe or take in the slightest bit of air.

"At that point, I blacked out. And I just remember waking up and I was having a very hard time breathing," she said.

When she came to, she saw the man shut her bedroom door, then heard him leave through the side door.

She called the police.

"I didn't clean myself. That's the best thing you can do. Do not clean yourself up. Do not. Just because you feel dirty or scared, do not. Because that's raw DNA on your body," said Trent.

Blood and semen marks were on Trent's bedding. She said police took all her sheets and pillows for DNA testing and evidence.

A friend drove her to the University of Tennessee Medical Center and DNA was collected using a Sexual Assault Kit.

"It's very overwhelming. It's a lot of people asking you the same questions," she said.

Trent said to investigators and medical staff that she couldn't describe her attacker. She could only confirm that he was Black and around 6' tall.

"When I looked at my investigator saying that I have no idea who this is, and I can't identify them in any way, they looked at me like I was crazy," she said. "Like, well, 'how do you not, how do you not know?'"

For most of the assault, Trent's attacker was behind her. She couldn't see much. She tried to rotate to see his face but was unable.

Heartbreakingly, Trent has lived through an assault in the past. She said through tears that it was not the first time she had been raped.

"I know what steps and what actions I need to take to keep myself mentally healthy and keep myself well, but it's still not easy when it happens. And I think that it happens so much more often than not," she said.

According to the Tennessee Bureau of Investigation, in February, the Knoxville Crime Lab had 209 pending requests waiting to be processed for sex offense cases.

The average turnaround time for the processing of Sexual Assault Kits is 26 weeks or 6 months. It can often be longer.

"Due to the high volume of evidence submitted to the state, it can take months for those reports to make it back to us for continued investigation and possible prosecution," said a spokesperson with the Knoxville Police Department.

Two months after her assault, Trent said she has not heard any updates on her case.

"It's crazy how many females have outreached to me and share their stories, because of things of this nature that have happened to them. But it is so hard to talk about," she said.

Trent dreams about the attack, gets nervous if something impedes her breathing, and goes through life wondering if her attacker has been near her since.

"Especially somebody like myself who isn't able to identify the person, I could be standing next to that person in the grocery store and not even know it," she said.

Since her assault, Trent has installed motion detectors on her property.

"I'm very paranoid about checking all the doors and windows to make sure they're locked," she said.

Trent wants women to be able to live on their own without fear of attack. Leaving a door unlocked is by no means an invitation or excuse for rape.

"It's a very embarrassing, violating, very sensitive thing to go through and to discuss," she said.

In partnership with the @McNabbCenter, as part of Sexual Assault Awareness Month, KPD patrol vehicles will have a special teal ribbon on display throughout April. Sexual violence can affect anybody anywhere. We must work together with diligence to bring these issues to light. pic.twitter.com/1CQe1wYukE

Sexual assault can happen to anyone, regardless of their age, gender, race or socioeconomic status. Those who are victimized may suffer for years due to the trauma, but there is help.

"I'm so shocked at how many assistance programs there really are out there to help people," said Trent.

She used many of the services offered through the Sexual Assault Center of East Tennessee, a program within the McNabb Center.

The staff there said the best way to help a sexual assault victim is to believe the story they share with you.

"The more awareness and education we can do in the community, then the more other individuals are going to be there to support survivors as well," said Catherine Oaks, Director of Victim Services for the McNabb Center.

Showing some simple support can go a long way.

"Just try to empower the person. Let them know that it's okay. You're not the only person this has happened to," said Trent.

During the month of April, the McNabb Center is hosting several virtual events to help survivors.

Tuesday, April 6, people are encouraged to wear teal, the awareness color of sexual assault and share pictures to social media using the hashtags #TEALout and #McNabbgoesTEAL.

Wednesday, April 7, people are asked to unify around one message to survivors: we believe you. You can take the pledge to do so here.

Monday, April 12, the Sexual Assault Center of East Tennessee staff will share their experiences and answer questions through a virtual presentation on Facebook Live.

If you or someone you know is a survivor of sexual assault and needs help or someone to talk to, the Sexual Assault Crisis Hotline is open 24/7.

You can remain anonymous.