KPD: Indiana man faces charges after Knoxville 19-year-old shot herself in head for his "viewing pleasure"

KPD said Grace Anne Sparks, 19, and Hayden Berkebile had a relationship that began before she turned 18. 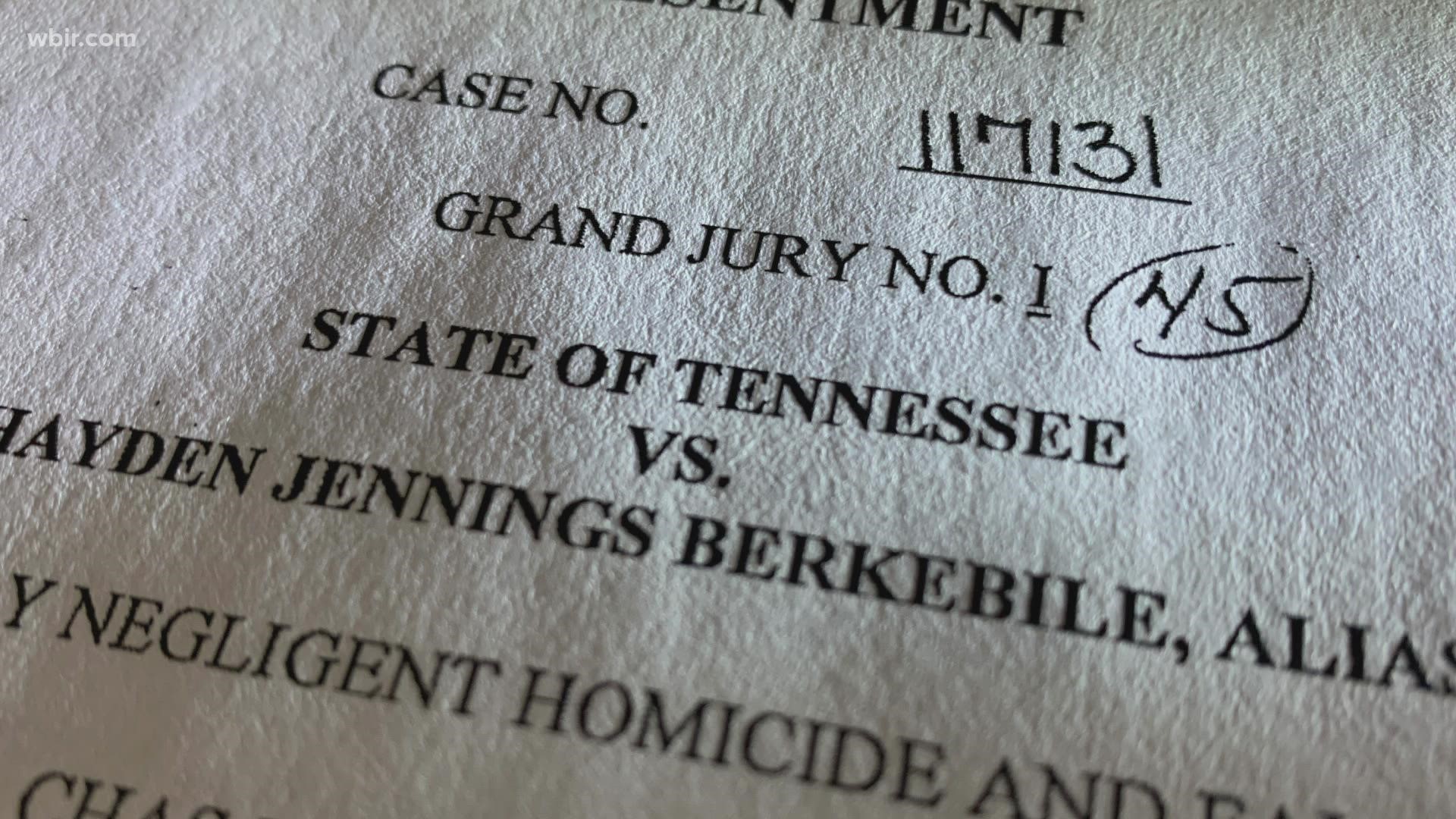 KNOXVILLE, Tenn. — Knoxville Police are accusing an Indiana man of causing the death of a 19-year-old by encouraging her to kill herself for his "viewing pleasure" during a September 2019 video chat session, records show. The criminal case against him is a first of its kind for Tennessee, attorneys say.

"On the day of the victim's death, the victim asks Mr. Berkebile to use her," the affidavit said. "Berkebile states 'No, I want to kill you.' 'That's all I [expletive] want.’"

Grace Anne shot herself with a .357 revolver on her bed in a West Hills apartment, the affidavit said. Her father was asleep in the next room, her mother told 10News. She was pronounced dead on the scene.

"Grace Anne had a heart of gold," said her mother Candis Sparks on Friday. "As soon as I started hearing a couple of months later about the details surrounding her death, I was angry. I was furious. I was devastated ... Why did this person decide my kid needed to not be here anymore? What made him so special that he gets to decide that?"

Officers responded to the apartment after Berkebile called 911. He told dispatchers he was speaking with Grace Anne on Facetime when she began to speak oddly.

"Berkebille stated that the victim had been suicidal for years and on this day during the course of their conversation, she grabbed a gun, the camera moved, he told her 'no, no, no' and then heard a gunshot," said the warrant affidavit.

While the incident was initially ruled a death-by-suicide, evidence of more than 2 years of electronic communication between Sparks and Berkebile led police to investigate the case as a homicide, the affidavit said.

When contacted by 10News, Berkebile said he was at work and unable to do an interview. He didn’t return a follow-up call or text. His attorney in the public defender’s office did not respond to a request for comment.

"A heart of gold"

From the time she was a child, her mother said Grace Anne loved animals. As soon as she graduated high school, she moved from Cookeville to Knoxville with the goal of eventually enrolling in the University of Tennessee College of Veterinary Medicine, said Sparks.

Her mother remembers Grace Anne's bright blue eyes, her blonde curly hair and her joy when she adopted a horse, Dana, in Knoxville.

"She had the world by the tail," Spark said. "She was pretty. She had a great personality. She was super smart—and there's no end to what she could have accomplished."

When she found out her daughter shot herself—and the medical examiner ruled it a suicide, Sparks said she couldn't believe it.

"It just didn't feel right," she said. "I mean, I know there's a denial when something like that happens. But this was not that. This was a gut feeling that something's not right. It just didn't fit."

She said her daughter had issues with anxiety in school but never said she had any thoughts of suicide.

Sparks said detectives began asking her about Berkebile, a man she had never heard of before. They said her daughter had been talking with him online for years, possibly since she was as young as 13 years old.

She said there's a lesson for all parents in her daughter's story: be alert to what your kids are doing online.

"When you give your kid a smartphone, you've essentially given them a plane ticket to anywhere in the world, an unsupervised plane ticket," she said.

Sparks said she wants Berkebile to face the maximum penalty if convicted. The false reporting charge he faces carries a longer sentence than the negligent homicide charge, between 2 - 8 years behind bars.

Grace Anne's case is likely a first in the state of Tennessee, attorney T. Scott Jones said. It's the first time prosecutors have charged a man with murder when he was 300 miles away from a woman who shot herself.

"It is really unusual," Jones said. "It's a case of first impression in the state of Tennessee."

He said investigators will be collecting all the evidence they can find to present to a jury.

"They're going to look forensically at all of the data that's available both from the respective cellular devices and what's available out there in the social media world," Jones said.

He can't predict, based on the publicly available evidence, which side has a stronger case, especially since there's no precedent. Prosecutors must convince a jury Berkebile caused Grace Anne's death.

"Did he create an unjustifiable, substantial risk by his actions and by his words?" said Jones.

A key determiner of Berkebile's culpability will be whether he knew Grace Anne had "suicidal ideations" when he was speaking with her, Jones said.

Credit: KPD
KPD awarded Investigator Chas Terry 'Officer of the year' for his work on the Sparks case.

Last month, Knoxville Police awarded Investigator Chas Terry 'Officer of the Year' for his work on the case.

"Terry sensed that this was not a typical suicide and pursued matters further," the department said. "Terry was able to determine that the suspect had an ongoing relationship with the victim. The relationship dated back to when the victim was a juvenile and the suspect was an adult."

KPD said charging Berkebile could result in new case law and Terry worked closely with the district attorney to present a detailed account of the events to a grand jury, which returned an indictment in February 2020.

Terry then traveled to Indiana to arrest Berkebile.

"Due to Investigator Terry's diligent investigation, what could have very easily been closed as a suicide was investigated to the fullest and a true predator has been taken off the street," KPD said.

Berkebile's trial is set for September 29, two years to the day after Sparks shot herself.