Guy is accused of plotting his parents' deaths because he wanted their money. They were about to end their longtime financial support. 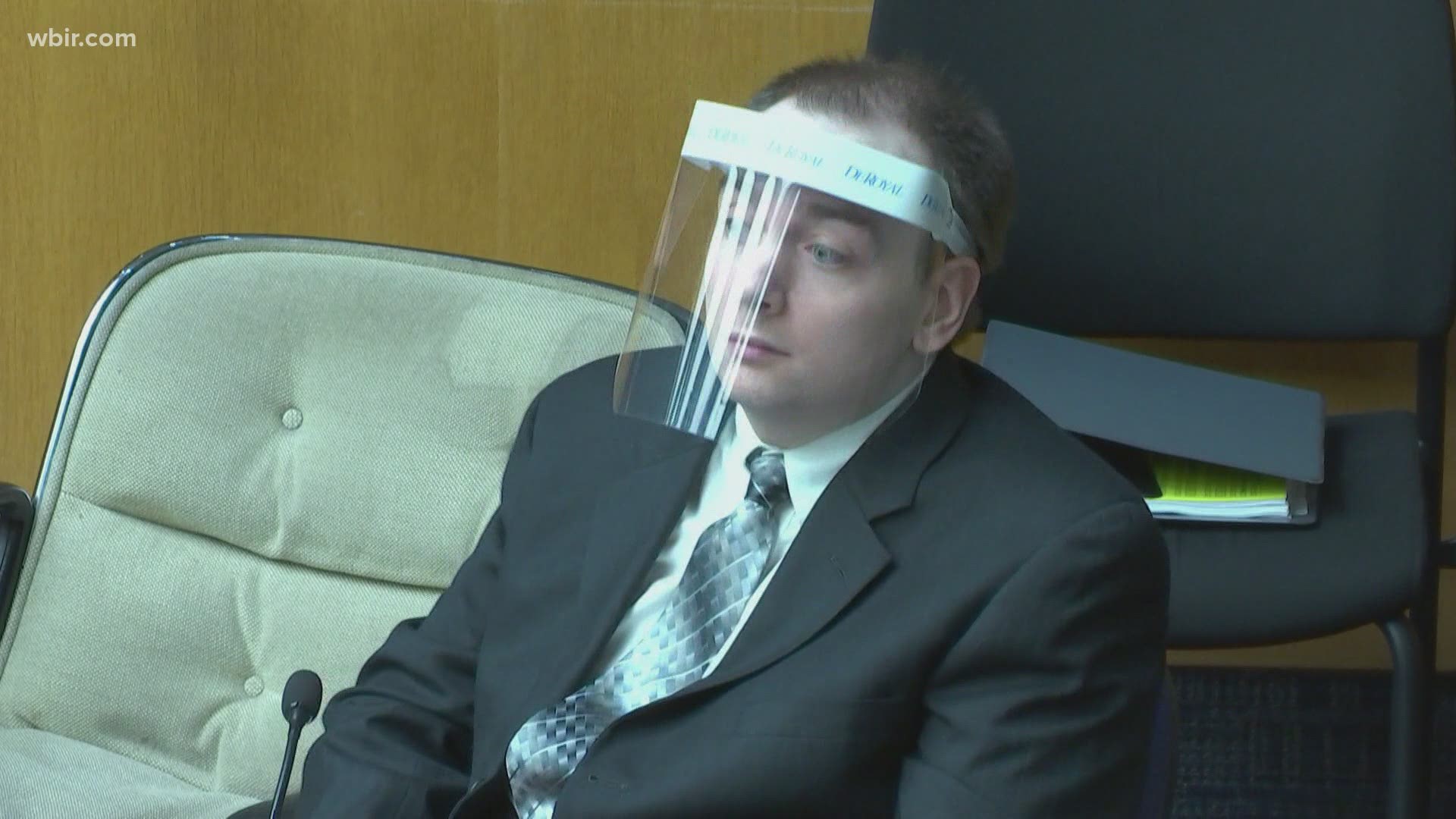 A man's severed hands in an upstairs exercise room. Two tubs of body parts floating in industrial chemicals in the upstairs master bathroom.

Knox County investigators found a vast and disturbing amount of evidence in the Nov. 26, 2016, homicides of Joel and Lisa Guy in their Goldenview Lane house in West Knox County, testimony at trial showed Tuesday.

They also found fingerprints -- about a half-dozen of them belonging to the alleged killer, Joel Michael Guy Jr. Forensics officers found his prints on a Charmin wipes package and on a Clorox package, among other places.

On Tuesday, prosecutors Leslie Nassios and Hector Sanchez called a series of witnesses including McCord who testified about the long list of evidence taken from the Guys' home.

McCord testified the atmosphere in the house got stranger and strangers as officers entered it the afternoon of Nov. 28, 2016. Someone had turned the heat up high, and the detective said he smelled a distinct chemical smell.

On the kitchen table were the wallets of the homeowners, a hammer and a cellphone, he said. But no one was around.

A dog was barking upstairs.

Upstairs, McCord and Officer Stephen Ballard spotted human hands on the floor of a room. Then McCord said he checked the master bedroom and the master bathroom.

On the bathroom floor he could see two large tubs holding what appeared to be body parts.

Later, officers would lift the lid off a stock pot on the stove and find Lisa Guy's head.

Tom Finch, a former forensics officer with the Knox County Sheriff's Office who is now retired, testified he found prints while helping to process the house after the victims' bodies were found Nov. 28, 2016.

Finch said he matched what he found in the house with known prints of Guy in a federal data system. He also testified he found a print on one of the knives at the crime scene but couldn't confirm it belonged to Guy.

Authorities have not explained why Guy's prints already had been taken and stored by law enforcement, but the state says he doesn't have any criminal convictions.

Retired KCSO Capt. Brad Park, who oversaw the forensic unit, also testified that he found a print that matched that of Guy in the home.

The prosecution also called other KCSO current and former forensics officers who photographed, logged and carried out evidence from the Guy home.

Items were taken from throughout the house because so much had gone on there the day of the killings and afterward. Prosecutors say Guy killed first his father and then his mother, and then began cutting up their bodies in an effort to dispose of them.

Dozens of pieces of evidence are being reviewed for the jury. They're stored in four metal cages that have been placed in the back of Judge Steve Sword's courtroom as the trial proceeds.

Guy, 32, is being tried in Knox County Criminal Court on charges of first-degree murder and abuse of a corpse.

The prosecution alleges Guy, living on his parents' generosity in Baton Rouge, La., decided to kill the couple because they were going to shut off his financial support. Family members testified Monday that the Guys were ready to retire, sell their house and move to the old family home place in Hawkins County.

Guy, however, had his own ideas, the prosecution alleges, intending to murder them, hide his father's remains and claim his mother's $500,000 life insurance for himself. He wrote down and speculated about their other assets as well, evidence has shown.

He also bought tubs of chemicals he hoped would dissolve their dismembered body parts for easier disposal, the state alleges. When forensic officers began processing the house, they found two bins stuffed with human body parts floating in a chemical soup in the bathroom of the master bedroom, testimony Monday showed.

The killer had laid plastic sheeting under the bins and hooked up a hose from the shower nozzle to help wash the crime scene. Sitting in the bathroom sink was an Emeril knife, one of many blades found by bloody clothes and evidence throughout the house, KCSO forensic technician Sandi Campbell testified Monday.