The jury is made up of five men and seven women. There are three people of color and the panel is relatively young. 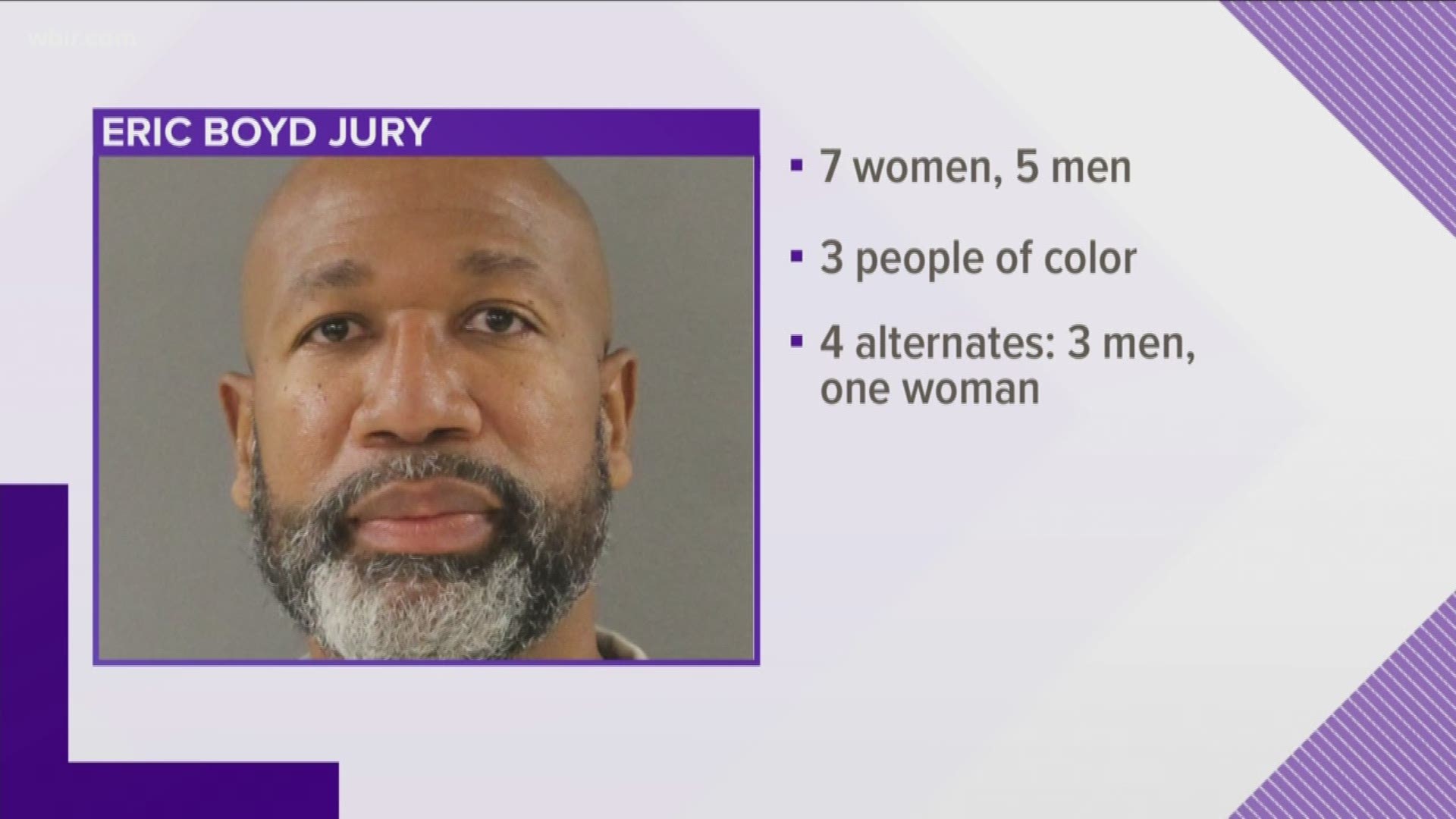 KNOXVILLE, Tenn. — WBIR will live stream the testimony in the trial of Eric Boyd on WBIR.com, in the WBIR app, and the WBIR YouTube page.

A jury has been seated for the Eric Boyd trial, the fifth person believed to have a hand in the 2007 carjacking, rape, and murder of a young Knox County couple.

Eric D. Boyd, 47, faces charges that include kidnapping, rape, and murder. He's accused of having a direct role in the attacks on Chris Newsom, 23, and Channon Christian, 21, in January 2007.

Monday morning, about 75 prospective jurors gathered to be questioned by prosecutors and the defense. By 3 p.m., 16 people had been selected, 12 jurors and four alternates. There are five men, seven women, and three people of color on the jury. The alternates are three men and one woman.

The jury was sworn in and Judge Bob McGee set opening statements to begin at 9:30 a.m. Tuesday.

The panel also is relatively young, with four or five appearing to be in their 20s. Knox County juries often skew older than that.

Boyd and the families of the two victims were also present in the courtroom.

Many of the potential panelists summoned Monday morning said they were children when Christian and Newsom were carjacked and killed in 2007. They told prosecutors, the defense attorney and Knox County Criminal Court Judge Bob McGee they remembered little about the high-profile case and had been exposed to little of it.

One young woman said she was 8 in 2007 and had only a vague recollection of the crimes that have resulted in seven trials since 2008.

Many older Knox Countians, however, recalled the torture-slayings well and could even remember the specific names of all the defendants -- ringleader Lemaricus Davidson, his brother Letalvis Cobbins, Cobbins' girlfriend Vanessa Coleman and their friend George Thomas along with Boyd.

But it's the first time Boyd has been tried for murder in the deaths of Christian and Newsom. He's previously been convicted in federal court of helping hide Davidson after the killings.

About 28 prospective jurors were called in to meet one-on-one with the judge and attorneys for specific questioning based on answers they gave to a 30-page questionnaire. Many were probed after acknowledging that they'd heard or read something about the murders. Several were adamant that not only did they know about the case but were certain Boyd had something to do with them.

About half of the 28 were excused from serving for reasons that included knowledge about the killings or the personal hardship that would be created from having to give up time to be on the jury.

"I think that was pretty clear," McGee observed after excusing one woman who indicated she knew a lot about Boyd.

On Monday afternoon, the court planned to bring in what's left of the 80 or so potential panelists summoned for what's called general voir dire. That is a chance for the lawyers and the court to offer general questions and get an overall feel for what the panelists are thinking.

Jury selection likely will continue into Tuesday. The trial is expected to take about two weeks.

The jury is not being sequestered, meaning they can go home at night.

Defense attorney Clinton Frazier objected to using a pool of Knox County citizens, arguing so much of the populace already has been exposed to the case.

McGee said he thinks that with care and attention a jury can be found here in Knox County that can hear the facts and deliver a fair and impartial verdict.

Boyd is serving an 18-year federal prison sentence for helping hide Davidson. He could die in state prison if convicted of killing Christian and Newsom.

The state is not seeking the death penalty.

10News reporter Cole Sullivan will be present in the courtroom. You can follow details of jury selection via his Twitter page: