Last Monday, authorities said Williams shot and killed Channara Pheap, 33, after a struggle at an apartment complex off Merchant Drive in Northwest Knoxville. 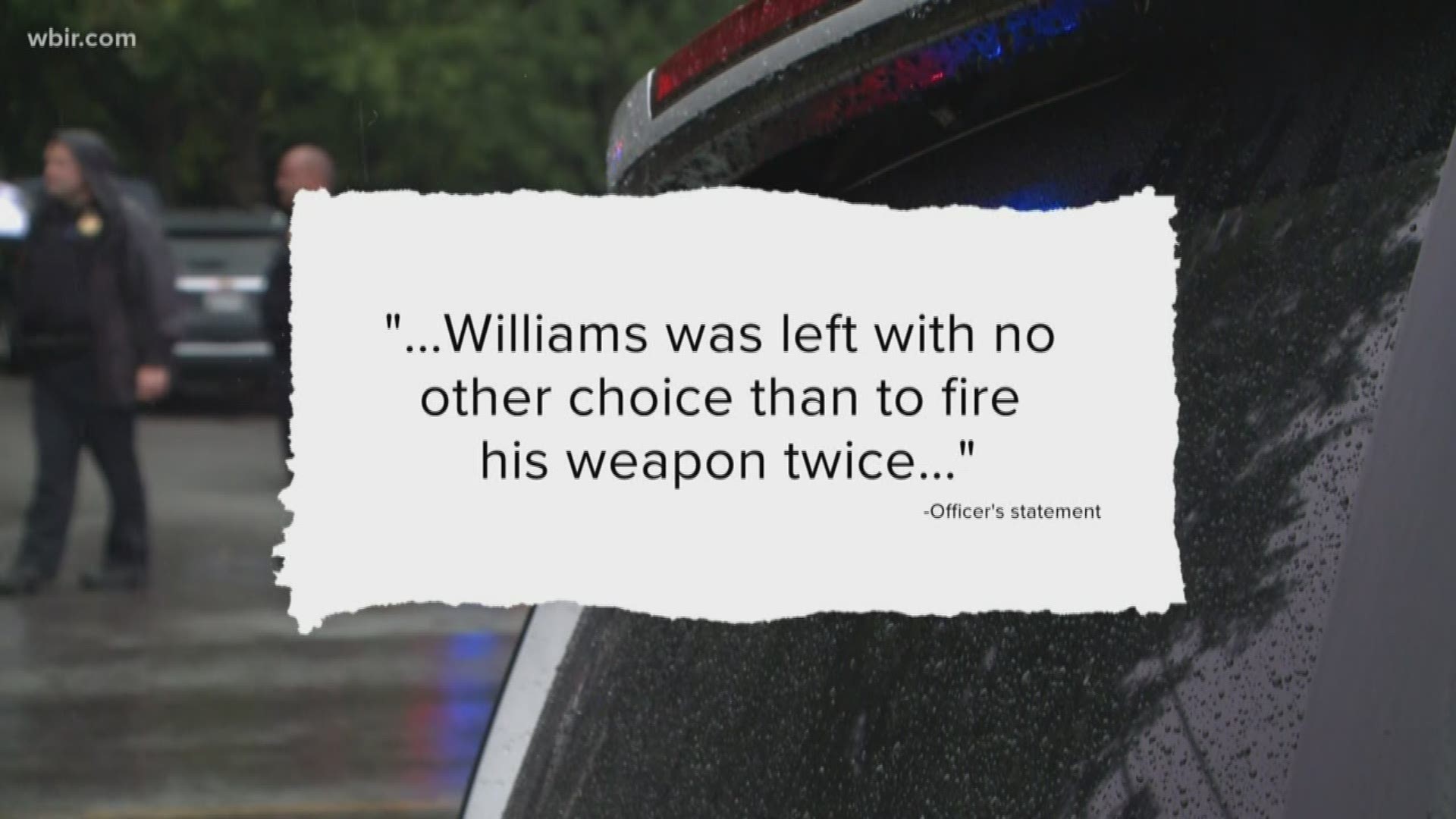 KNOXVILLE, Tenn. — The Knoxville Police Department officer who shot and killed a suspect Aug. 26 is now sharing his side of the story.

K-9 Officer Dylan Williams is on leave with pay. That's standard procedure anytime an officer is involved in a shooting.

Last Monday, authorities said Williams shot and killed Channara Pheap, 33, after a struggle outside an apartment complex off Merchant Drive in Northwest Knoxville.

Williams was there to investigate a hit-and-run.

Knoxville attorney John Valliant said Friday a report from the medical examiner showed Pheap died from a gunshot wound to the back.

Williams said in a statement through his attorney, Don Bosch, on Monday that that's not true. He said Pheap matched the description of the hit-and-run suspect and when he tried to pat him down for weapons, Williams said Pheap "began to resist and fight."

In the statement, Williams' attorney said Pheap "was ultimately able to get on top of Officer Williams and began to violently and forcefully attempt to choke" him.

At some point, Pheap got off Williams and ran away. That's when, the statement said, Williams followed and drew his Taser.

The statement continued, stating Pheap "jumped forward and was able to gain control of the Taser." Williams said Pheap then deployed the Taser and hit him in the waist.

Williams feared for his life, according to the release.  Pheap could have continued applying electric shock to him, the officer said in the statement.

The officer said he was too far from his car to deploy his canine partner so he "was left with no other choice than to fire his weapon twice."

After the two shots, he said Pheap ran away.

The statement said the suspect ultimately collapsed and was "shot once on the side of his body, contrary to initial reports."

"The Bosch Law Firm, P.C. represents Knoxville police officer Dylan Williams concerning the shooting that occurred in Knoxville on August 26, 2019. There has been significant confusion over this tragic incident. In an effort to more accurately inform the public of what happened, Officer Williams has asked our firm to release this information. This release is Officer Williams' statement only and does not claim to be that of any other individual or agency.

"On August 26, 2019, Officer Williams came into contact with the suspect, Channara Tom Pheap, during an investigation of a hit-and-run car accident off Merchants Road in Knoxville, Tennessee. During the investigation of this accident, Officer Williams was informed of the make, model and license plate number of the car that fled the scene. Officer Williams soon made his way to the address where the vehicle was registered, which was at Clear Springs Apartments. When he entered the parking lot of the apartments, he saw a car consistent with the make and model earlier described, and confirmed the license plate matched the information he was provided.

"Williams then began to close the gap between himself and the suspect in order to detain him. As Williams approached the suspect he jumped forward and was able to gain control of the Taser after a short struggle. Once in his possession, the suspect then leveled the Taser directly at Williams and fired it. The Taser "tags" struck Officer Williams in his waistband, and the wires of the Taser wrapped around his arms. He immediately felt electricity coursing through his body.

"Once the Taser is connected to a person, electricity can be continuously applied with the repeated pull of the Taser's trigger; understanding this, Williams feared that the suspect would this time successfully incapacitate him by possibly taking his service weapon and could either kill him or kill and/or harm others. Officer Williams has said that at this moment, he was certain he would never see his wife and one-year-old son again.

"Williams was too far from his patrol vehicle to deploy his canine partner as an alternative to stopping the suspect. Williams was left with no other choice than to fire his weapon twice while the suspect still maintained control of the Taser. After two rounds were fire, the suspect fled. Williams was able to pursue him, and the suspect ultimately collapsed. The suspect was shot once on the side of his body, contrary to initial reports.

"After Officer Williams made contact with the suspect, he secured the scene to the best of his ability and back up officers arrived. Officer Williams is fully cooperating with the investigation of his actions and looks forward to a prompt official disclosure and resolution of this difficult matter.

"Neither Officer Williams nor the Bosch Law Firm, P.C. will make any further comments regarding this matter at this time."

Knoxville Mayor Madeline Rogero urged last week for everyone to "remain calm and withhold judgment" until the investigation is complete.

KPD and KCSO have a memorandum of understanding between each other to investigate each others' officer-involved shootings. Rogero said the intent behind this is to remove any potential of partiality or bias.

Once the initial investigation is complete, deputies will hand their findings over to District Attorney General Charme Allen's office for review to determine whether criminal charges will be filed against the officer.