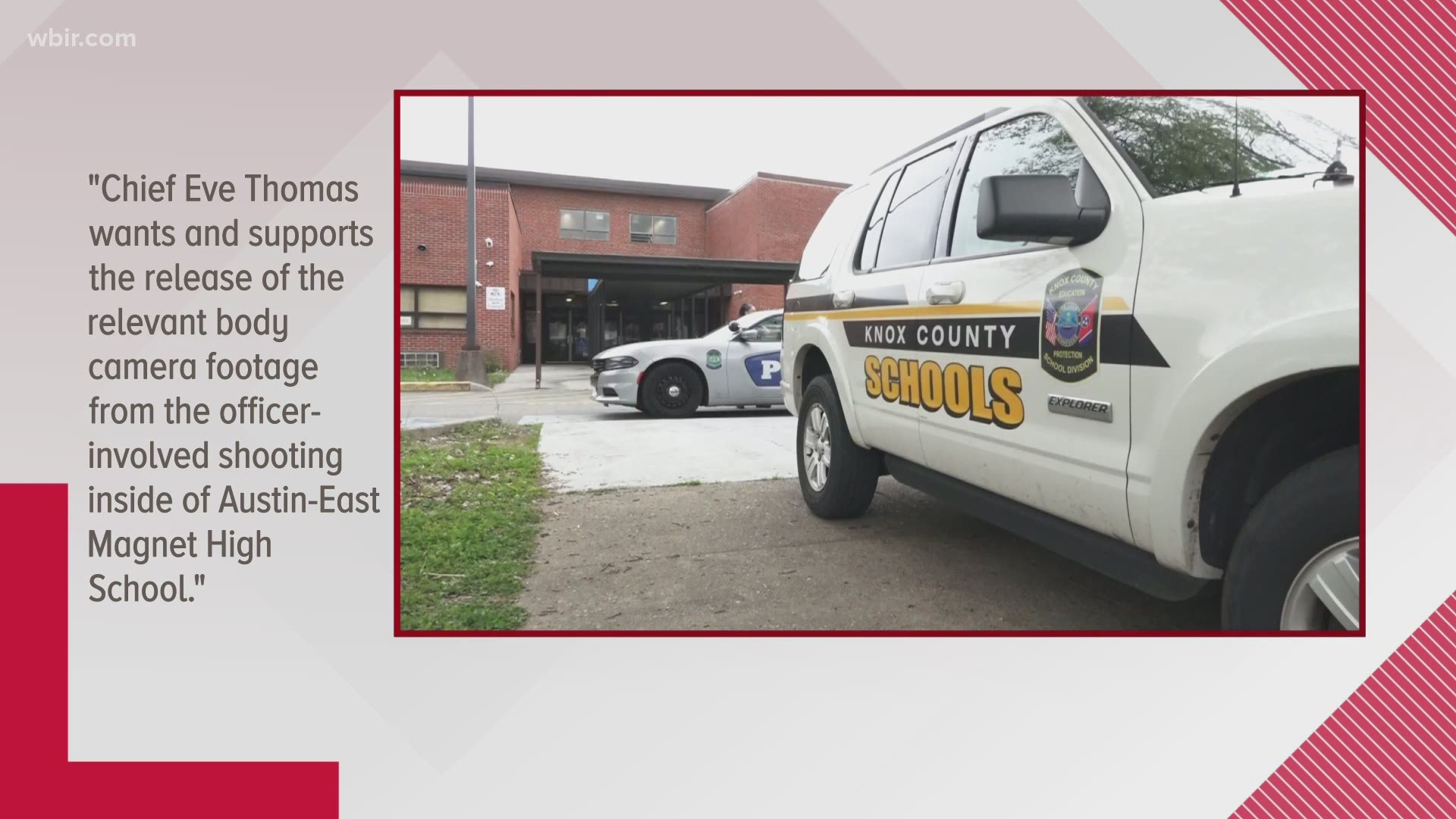 KNOXVILLE, Tenn. — All four Knoxville Police Department officers involved in the confrontation and shooting Monday that led to the death of an Austin-East High School student want their body camera video from the incident to be released unedited to the public.

"In an effort to accurately inform the public, all three officers fully support the release of all unedited body camera footage related to this incident," the statement from the Bosch Law Firm on Friday reads. "As Mayor Kincannon has publicly expressed, she, along with these officers agree that the public interest is best served by the immediate release of these videos."

Attorney Don Bosch's firm represents Lt. Stan Cash, and Officers Brian Baldwin and Jonathon Clabough, and Attorney Chuck Burks represents Officer Adam Willson in the incident, in which the men confronted an armed Anthony Thompson Jr., 17, in an A-E bathroom. Thompson's gun went off and he was shot to death by one of the officers, authorities say. Willson, a school resource officer, suffered a gunshot wound to the leg.

On Thursday, KPD Chief Eve Thomas herself endorsed release of the footage.

"Chief Eve Thomas wants and supports the release of the relevant body camera footage from the officer-involved shooting inside of Austin-East Magnet High School. Our officers want to see the video released, and the community deserves it," a statement released Thursday night reads.

After years of debate about the value and cost of bodycams, KPD finally got the money last year to buy them. The department has only just begun to use them.

Proponents say they help the public see how police officers do their job. Thompson's killing is the first high-profile incident in which KPD bodycams have come under scrutiny.

Despite growing calls from the community to see the video, Knox County District Attorney General Charme Allen said Thursday she will not make public the video right now. It's part of an ongoing Tennessee Bureau of Investigation review, the prosecutor said.

On Friday, Knox County Mayor Glenn Jacobs called on people to be patient and to allow Allen time to do her job in order to prevent hindering or tainting the investigation.

"In situations like this, it's hard to appeal for patience because we all want answers right now," he said. "I know District Attorney General Allen wants answers as well and that she will release the video to the public as soon as she is able."

It will become public at some point -- either after the officers are cleared of any wrongdoing or once a criminal case begins in court.

"I have to be mindful of a potential criminal prosecution, and that has to trump and come first," Allen said.

Allen said the investigation into how Thompson ended up armed in the bathroom just got underway Monday afternoon. It's too soon for any evidence to be released, she said.

"Everybody is entitled and allowed to see the bodycam footage in this particular case. However, it has to be done in the appropriate time," she said.

Earlier this week, Mayor Indya Kincannon said she'd wanted the video to be made public so that the community could see for themselves what happened. Social media has exploded with speculation, rumors, assumptions and gossip about who did what to whom.

Kincannon said, however, that Allen told her she wouldn't do that.

In Friday's release, attorney Bosch said his clients are cooperating in the investigation and "look forward to a prompt official disclosure and resolution of this difficult matter."

Three of the four officers involved in the Thompson shooting have been in uniform for close to 20 years.

Willson was being treated this week for the gunshot wound in the hospital. He is not represented by Bosch.

The officers are on paid leave pending the TBI review.

Thompson is the fifth A-E student to die this year in a shooting.

Justin Taylor, 15, was accidentally shot and killed in January when a friend was handling a gun in a vehicle in Northeast Knoxville.

Stanley Freeman Jr., 16, was killed in February will leaving Austin-East, allegedly by a 16-year-old and a 14-year-old.

Janaria Muhammad, 15, was found mortally wounded in February on an East Knoxville street in February.

Jamarion Gillette, 15, was found shot on a South Knoxville roadway one night in March and later died at University of Tennessee Medical Center.

Investigations into the killings of Janaria and Jamarion remain open and ongoing.