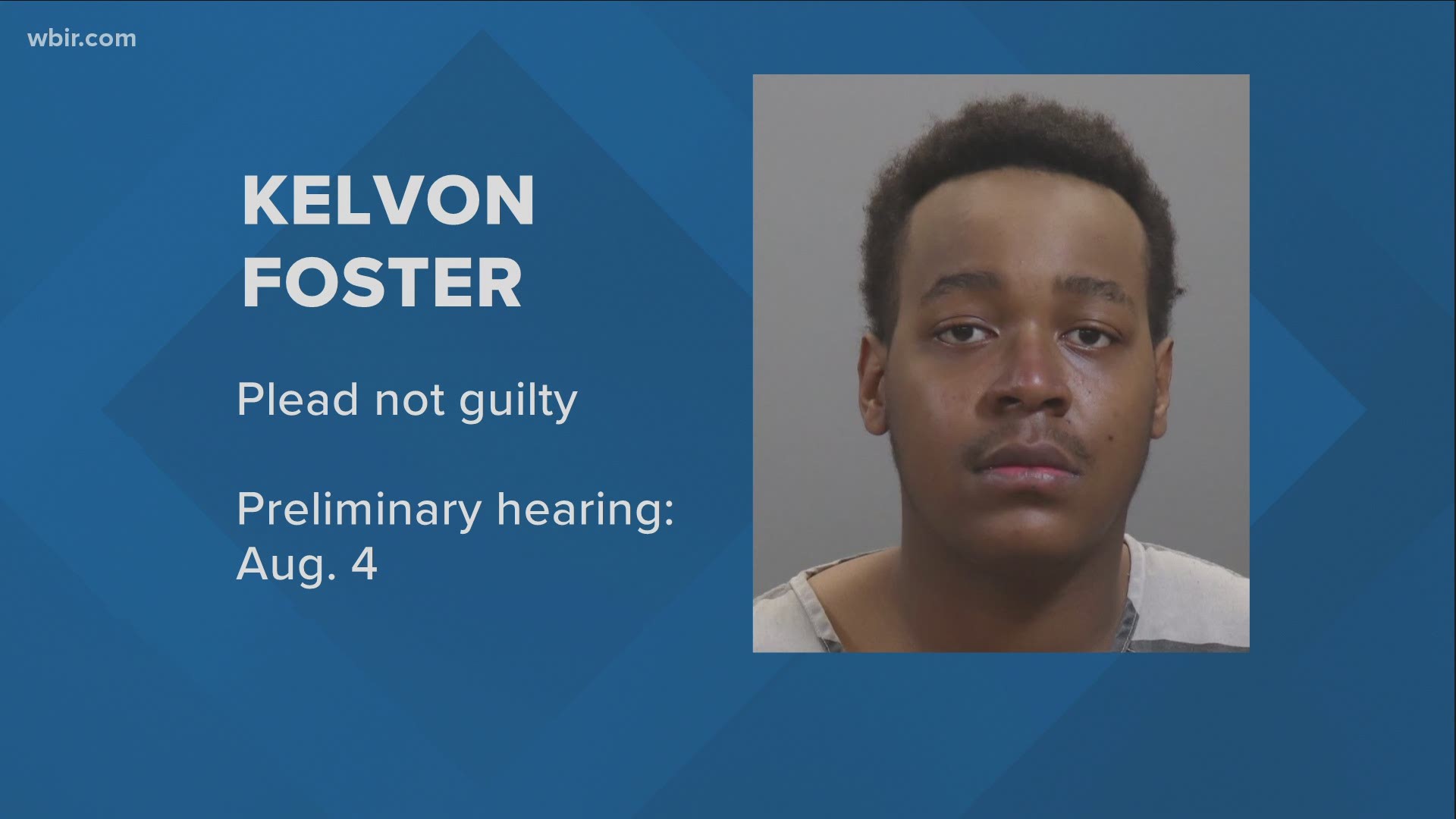 KNOXVILLE, Tenn. — UPDATE (June 23): Kelvon Foster was arraigned Wednesday morning on state charges that he provided a gun to Anthony Thompson Jr. Thompson had the gun during a fatal confrontation with police in an Austin-East High School bathroom in April.

Foster pleaded not guilty and the court provided him with an attorney, according to the Knox County General Sessions Court clerk.

A preliminary hearing has been scheduled for 9 a.m. Aug. 4.

Foster also faces a federal charge that he made false statements in connection with the purchase of the firearm. Surveillance video reviewed by authorities showed Foster filling out paperwork on April 5 at a gun store while Thompson looked at guns on display.

A 21-year-old Knoxville man has been charged with providing the Glock pistol that Anthony Thompson Jr. possessed during a fatal confrontation April 12 with police in an Austin-East High School bathroom.

Separately, Kelvon Foster faces a federal charge of making false or fictitious statements in connection with the purchase of a firearm involved in last month's incident. Surveillance video reviewed by authorities showed Foster filling out paperwork April 5 at a gun store while Thompson looked at guns on display.

Thompson, 17, a student at Austin-East, had a Glock 45 pistol the afternoon of April 12 when confronted by Knoxville Police Department officers in the bathroom. Officers struggled for control of the pistol with Thompson and the gun fired, with the round ending up in a trash can. A KPD officer shot and killed Thompson in the struggle.

Police had gone to speak with Thompson after he'd been in a physical fight earlier that day with a young woman. The young woman's mom warned authorities Thompson was known to have a gun.

"At the same time, prosecutors with the United States Attorney’s Office for the Eastern District of Tennessee and Special Agents with the Bureau of Alcohol, Tobacco, Firearms, and Explosives obtained federal complaints against Foster charging him with Making False or Fictitious Statements in Connection with the Purchase of a Firearm," the DA's Office said in a release.

According to prosecutors, Thompson went April 5 to Harvey's Pistol and Pawn, a gun and pawn store on Clinton Plaza Drive. He met Foster there.

"Thompson viewed the handguns for sale and left the pawnshop," according to the DA's Office.

Foster bought the 9mm handgun. Later that day, Foster met Thompson in a parking lot off Broadway and handed the Glock to Thompson, according to prosecutors.

Authorities recovered the gun in the bathroom after the April 12 confrontation.

The U.S. Attorney's Office also announced Friday that Foster faced a federal charge that could result in a 10-year federal sentence.

Foster appeared before U.S. Magistrate Judge Bruce Guyton on Friday morning, records show. He pleaded not guilty and was released on conditions of supervision, according to the U.S. Attorney's Office.

Limits include not possessing a firearm and staying within the bounds of the Eastern District of Tennessee unless he gets permission.

In U.S. District Court in Knoxville, Foster is charged with what's commonly referred to as a "straw purchase."

A federal complaint shows that Foster, Thompson and two other males went to the gun shop on Clinton Plaza Drive on April 5. Thompson couldn't legally buy a gun because of his age.

As Foster filled out federal Bureau of Alcohol, Tobacco, Firearms and Explosives paperwork, Thompson and the other two males went to a display area for firearms, surveillance video showed.

Foster told authorities Thompson had given him cash for the purchase before they went into the store, records state. The teen also told Foster what he wanted, records state.

ATF Special Agent Kristin Pyle said in her complaint that she traced Thompson's gun to Harvey's after it was found in the Austin-East bathroom. Thompson had it while sitting in a bathroom stall as officers came in looking for him.

It and a magazine ended up on the floor in the ensuing melee.

KPD is conducting an internal review of the killing. District Attorney General Charme Allen determined the officers did nothing that warranted charges.