Judge allows use of some evidence in dismemberment murder case; other requests pending 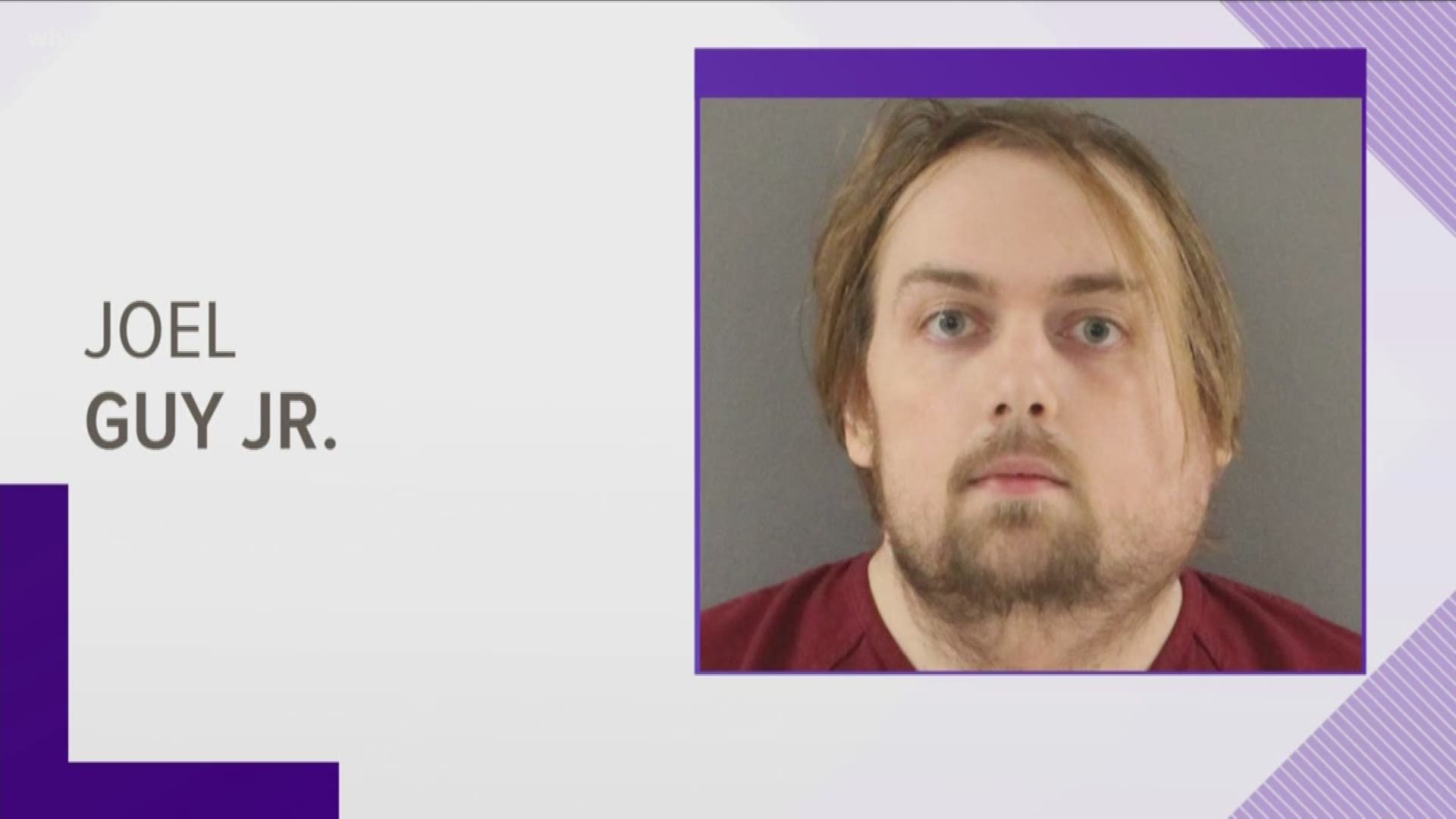 KNOXVILLE, Tenn. — Citing the bizarre, violent nature of the crimes, a Knox County judge is denying a man's bid to suppress evidence taken from his old bedroom in the home where his parents were killed and dismembered in 2016.

"This was no ordinary homicide scene," Criminal Court Judge Bob McGee wrote in a Nov. 5 order turning down the defense's bid to boot the evidence. "This was a double homicide in which two people were butchered and their body parts were in multiple locations throughout the house. Many were in caustic liquids. Some simmering, some soaking."

McGee's order pertains only to items such as as backpack with a notebook and a laptop taken from Joel M. Guy Jr.'s room in the Goldenview Lane house where Joel Guy Sr. and Lisa Guy were found murdered Nov. 28, 2016.

Defense attorneys also are challenging the seizure of other evidence, including items taken from Joel Guy's Baton Rouge, La., apartment after his arrest the following day. The judge hasn't ruled on that yet.

The fight over the evidence has been going on nearly a year, dating to December 2018 when Guy took the stand as part of a defense effort to suppress what authorities have gathered in the case.

McGee retires at the end of the year. A new judge will have to preside over Guy's trial, if there is one.

Records detail what deputies found in the house

Court records filed this year reveal the horrific scene in the Guy home that Thanksgiving weekend. The Knox County Sheriff's Office had hinted at the nature of the killings after Joel Guy's arrest in 2016 but were not specific.

Documents also suggest Guy had planned to murder his parents before coming up to Knox County to spend Thanksgiving with them in November 2016. He'd purchased strong, corrosive chemicals and solvents at a Lowe's in Baton Rouge a few weeks before coming to Tennessee.

Some of those items were found in the Guy home in Knox County, records show.

Knox County deputies found Lisa Guy's head "cooking" on a pot in the kitchen, records state. Joel Guy Sr.'s hands were on the floor in an upstairs room. The couple's remains also were found in plastic containers in an upstairs bathroom, according to records.

Someone had turned thermostats in the home up to the maximum, with temperatures registering in the 90s. Several space heaters also were running.

The Guys were planning to get out of the house in December 2016 and move to Surgoinsville, Tenn. The house was for sale.

A co-worker of Lisa Guy's called police on Nov. 28, 2016, concerned about her whereabouts on Monday, Nov. 28, 2016. She hadn't shown up for work and was to be feted at a goodbye luncheon, according to records.

A Knox County Sheriff's Office deputy found the house in a subdivision west of Lovell Road all locked up when he conducted an initial welfare check. The Guys' vehicles were parked outside.

Later, however, several deputies and investigators returned to the house.

When they weren't able to get in, they consulted a realtor, who suggested they try getting in by using a garage door opener in one of the Guys' vehicles. That worked.

Officers opened the garage door, noted heat emanating from the house and what one said was a "weird" smell. They continued on into the house. A brief, initial search of the house revealed guns on the dining room table, the severed hands upstairs and blood stains, records state.

Realizing what they faced, authorities left the house to plan their next moves. A subsequent, more thorough search and assessment followed later.

That's when investigators found chemicals in the house that appeared to be used in an effort to process the body parts.

Groceries also were found on the foyer floor. It appears Lisa Guy had purchased the groceries on Saturday afternoon, Nov. 26.

By 3:35 p.m. that same day, evidence indicates Joel Guy went to a nearby Walmart and bought several items including isopropyl alcohol and hydrogen peroxide.

Store surveillance video showed then that he had a bandaged hand.

For those reasons, authorities suspect Guy killed his parents sometime that Saturday afternoon and then set about trying to dispose of their bodies.

Guy drove to Louisiana after holiday, then came back to Knox County

According to his lawyers, Guy "suffered wounds to his hands requiring medical treatment" sometime before Sunday, Nov. 27. They do not say if Guy suffered the injuries as a result of dismembering his parents.

But when he got to his parents' neighborhood the night of Nov. 28, 2016, he saw the crime scene tape around the house and decided he wouldn't stop. He drove through the night back to Baton Rouge, where he was soon arrested.