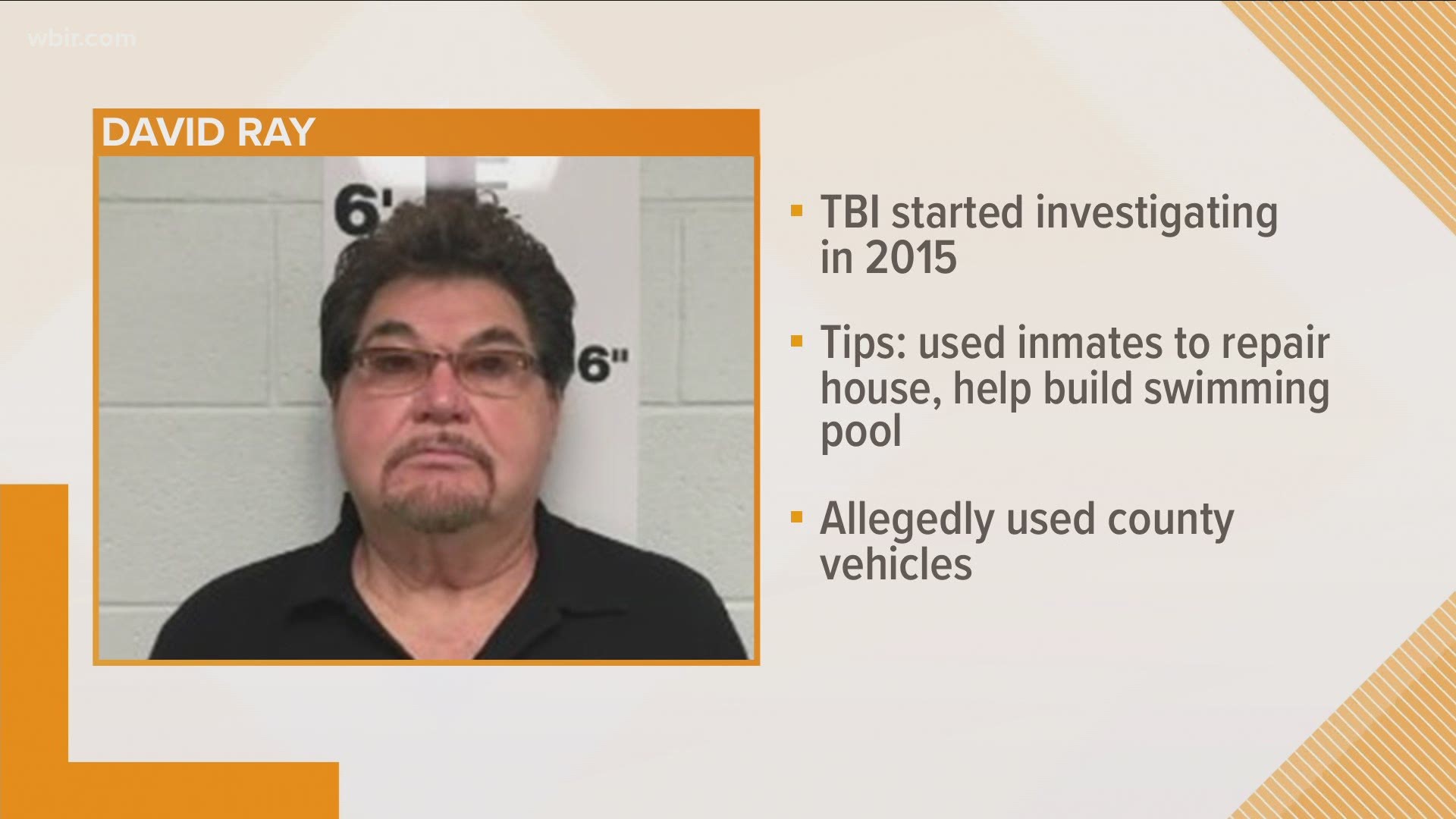 KNOXVILLE, Tenn. — Former Claiborne County Sheriff David Ray used jail inmates in his custody to fix up personal vehicles at the department garage and sometimes charged the purchase of parts for those vehicles to his own department budget, TBI records state.

Throughout 2017, he used his county-issued phone to communicate with inmates, to direct subordinates in his scheme, even to carry on an affair, records state.

The allegations, obtained this week by 10News, are contained in search warrant affidavits TBI agents prepared in 2017 while in the midst of a yearslong investigation into alleged corruption by Ray, a longtime sheriff who'd also previously been a TBI agent and a judge.

Ray, 74, is due in Claiborne County court Wednesday afternoon in New Tazewell, perhaps to offer a plea. He faces multiple counts of official misconduct as well as charges of tax evasion and using inmates for personal gain. 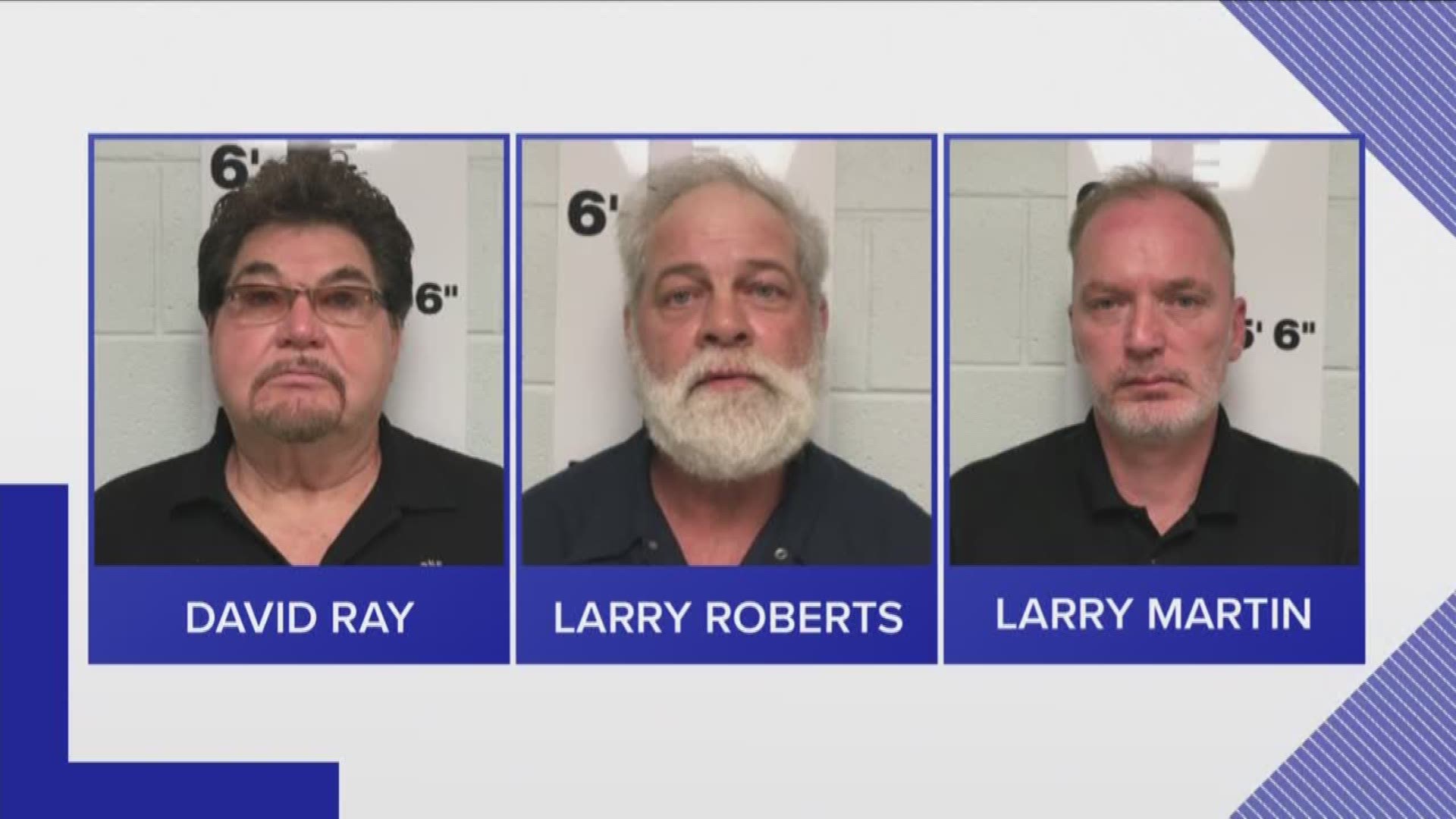 His defense attorney could not be reached Tuesday.

Vehicles, a house, a swimming pool

A state grand jury returned indictments in 2018 against Ray and two subordinates.

But the TBI's investigation of Ray dated to at least 2015, records state.

In 2018, the TBI issued a release that generally alleged what Ray had done. Search warrant affidavits used to gather the sheriff's cellphone data in 2017 offer far greater detail about what the statewide agency found.

Five years ago, agents began hearing that Ray had used inmates to help repair his house after a tornado hit the Speedwell area in July 2014.

At the time, Ray called it a "life-changing event" for his family.

As they began looking into the allegations, investigators heard from a confidential source and a cooperating witness.

In August 2017, for example, TBI Assistant Special Agent in Charge Darren DeArmond spoke to source who is a "law enforcement officer," records state.

"The law enforcement officer stated he had traveled in the past with Sheriff Ray and other members of the Sheriff's Department, along with jail inmates, to Nashville to pick up surplus vehicles that the Sheriff had purchased," an affidavit from DeArmond states. "The law enforcement officer stated he had observed inmates driving the vehicles back to Claiborne County where they conducted repairs on them at the Sheriff's Department garage.

"The law enforcement officer stated he was aware of the Sheriff utilizing inmates to work on his house and that there was currently property owned by the Sheriff at the Sheriff's Department garage being repaired by trustees from the jail."

The TBI affidavits state the investigation showed inmates had worked on a Nissan truck that belonged to Ray, a Ford tractor that Ray bought in Nashville and a bulldozer.

TBI agents in September 2017 followed and watched Ray during the trip back from Nashville with the newly acquired tractor, an affidavit from TBI Special Agent Todd Coleman states.

Auto parts and an affair

Inmates had to work on the white Nissan truck in August 2017 after they damaged its wiring while using it on an errand to Ray's Hancock County farm, documents state. A confidential source provided the TBI with video of the Nissan sitting on a lift in the garage in Tazewell.

Some of those invoices were signed by Claiborne County jail inmates and their relatives, according to TBI records. In preparing an October 2017 affidavit, Coleman told a judge he thought repairs to Ray's Nissan truck were included in those billings.

"I believe that Ray used his official power to utilize the Claiborne County Sheriff's Office vehicle repair budget to purchase vehicle parts to repair his personal vehicle, which was damaged by jail inmates/trustees while hauling bales of hay for Ray on his personal farm," the agent's affidavit states.

DeArmond, in a September 2017 affidavit, said he'd also identified "over 800 contacts" between Ray's county phone and two phones used by the sister-in-law of a drug distributor.

Coleman wrote in another affidavit that he believed Ray was using his county phone "to facilitate an affair" with the woman.

"I believe that Ray is using his official power and the Target Telephone to answer 'favors' for (the woman) via text message," Coleman wrote.

The TBI also alleges that Ray forged and altered at least one vehicle title and tried to evade paying the proper sales tax "on several personally owned vehicles that he sold dating back to 2012."

Ray also used his phone to communicate orders to Larry Allen Roberts, who was a sergeant at the time with the Sheriff's Office. Roberts, 56, also was a convicted felon, according to TBI records.

Roberts was charged in 2018 with two counts of official misconduct. As it investigated Roberts, the TBI alleges, agents learned that he'd used a county vehicle to acquire a controlled substance.

Larry Lee Martin, 47, who had been a captain with the Sheriff's Office, also was charged at the time with three counts of being a felon in possession of a firearm.

Along with the TBI, personnel from the FBI, the Tennessee Department of Revenue, the Tennessee Comptroller of the Treasury and the Internal Revenue Service worked on the investigation.