The Tennessee Department of Health said Clarence Nabers' dental license is on probation for two years. 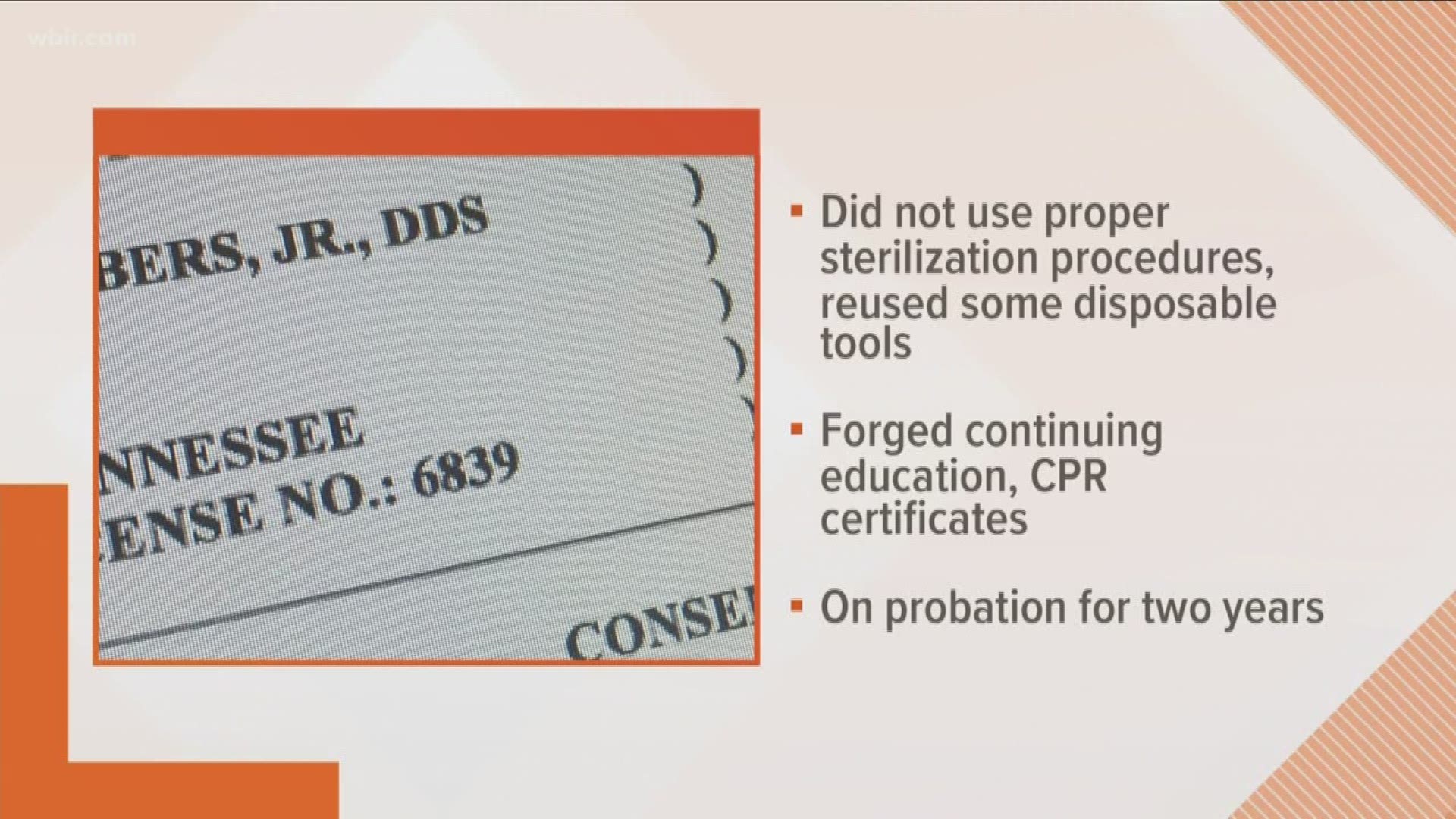 KNOXVILLE, Tenn. — A Knoxville dentist must pay over $11,000 in fines and is on probation for two years after the Tennessee Department of Health found he improperly sterilized tools, forged certificates and had employees perform work beyond their qualifications.

Clarence Nabers owns and operates two dental offices in Knoxville, but the state said it found he was the only dentist at both locations for a few months in 2018.

Both of his practices did not use the proper sterilization procedures for multiple tools, according to the state. They also reused disposable burs. Burs are often used to grind away tooth tissue, usually enamel.

Nabers allowed dental hygienists to practice outside of their qualifications, according to a disciplinary order from the state department. The state said he let them provide comprehensive examinations, diagnoses and treatment planning without consulting him.

They also administered fillings and placed permanent crowns, veneers and dental bridges, according to the disciplinary order.

According to the state's findings, both practices placed burs that had been used in dental procedures in cold sterile solution.

Autoclaves, which sterilize the tools after they're cleaned, were not spore tested to ensure they were able to kill dangerous microorganisms on dental tools, the health department said.

The report said Nabers has implemented new protocols for documenting the cold sterile solution and the cleaning and maintaining of dental burs at both offices. It also said he got an outside biological monitoring service to provide periodical spore testing as of December 2018.

The handpiece and air water syringe used on patients in dental procedures were not properly sanitized between patients and was only wiped with a sanitizing cloth, the state found.

"Dental chairs not cleaned with a sanitizing agent," the department of health consent order said.

It said Nabers has since implemented new protocols for the dental bur sterilization, operatory disinfection, and handpiece maintenance.

Nabers admitted to forging several certificates from Arrowhead Dental Laboratories in Arizona and said he did not attend seminars and forged documents he sent for his 2015-16 continuing education audit.

He also admitted to having his dental assistant forge a CPR card because, according to the report, he claimed he lost his card after taking the certification course.

"According to the review of 18 dental charts, respondent [Nabers] had not recently updated the patients' medical history," the report said.

As a result of these violations, the State of Tennessee Department of Health put his dental license on probation for two years.

Nabers must contact and complete a TOSHA Consultative Service Program, submit proof of a new heat sterilization devices, complete 10 continuing education hours in the area of ethics and professionalism, 10 in infection control, and 10 in record keeping and billing within 120 days.

The state also said he must pay $11,000 within 30 days for all of the different penalties.