Lock your doors with customers and employees inside, don't let anyone in or out, go to the stockroom and wait for the all clear. 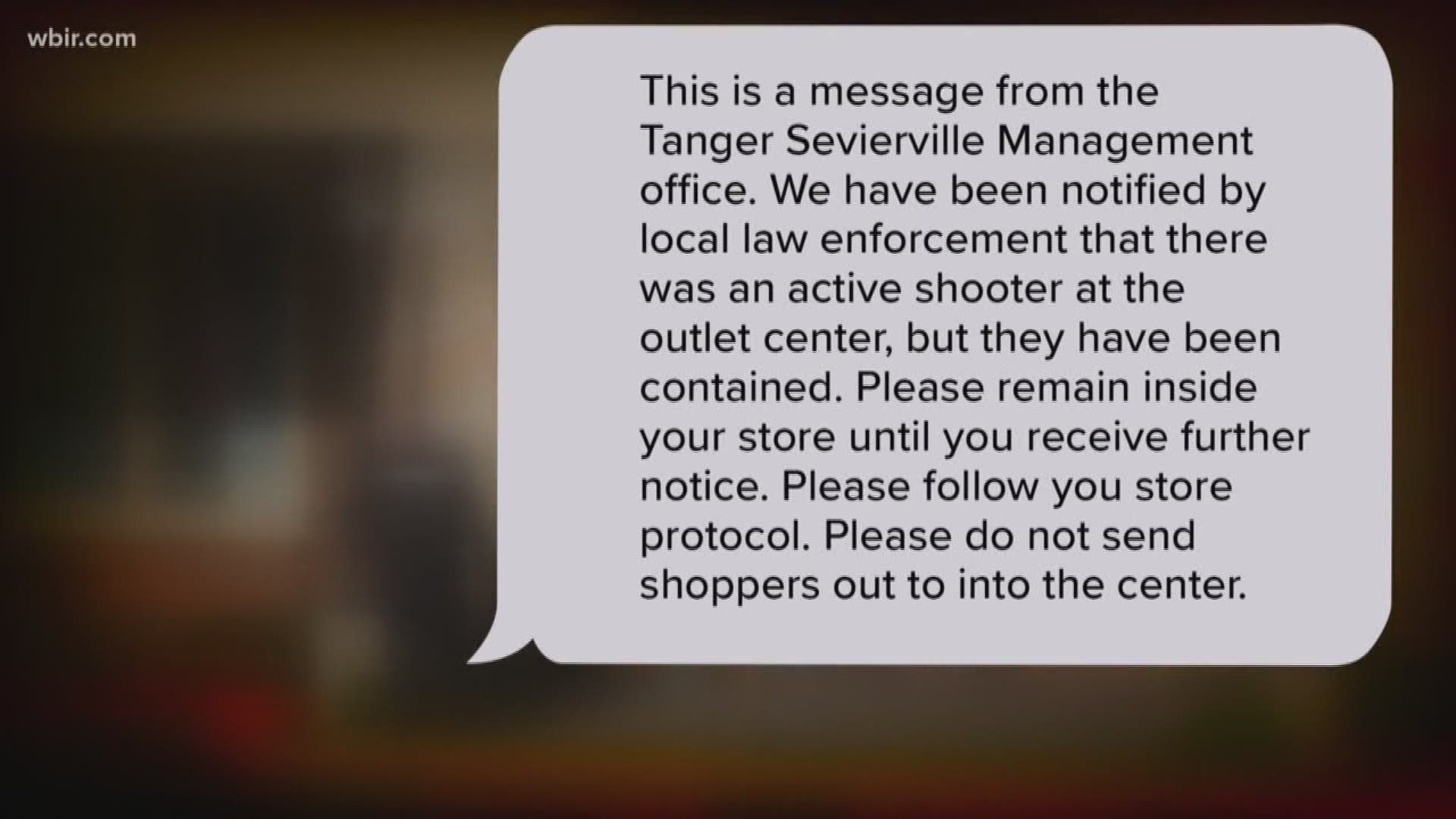 SEVIERVILLE, Tenn. — A man randomly opened fire at the Tanger Five Oaks Outlet Mall in Sevierville on Tuesday, April 16, according to the Sevierville Police Department.

RELATED: 'She lit up the room' | Woman killed in Tanger shooting remembered for her smile & spirit

Thousands of people visit Tanger Outlets to eat and shop every day. Management says the safety of these customers is a top priority taken very seriously.

"Tanger is very adamant about our shopper safety and the safety of our tenants and stores, we do have protocols in place," General Manager Angela Harness said.

During Tuesday's incident, store managers received messages and emails, alerting them to the situation.

One manager shared the messages with 10News, revealing the mall's active shooter protocol.

Reply to this msg (OK, NOT): This is a message from the Tanger Sevierville Management office. We have been notified by local law enforcement that there was an active shooter at the outlet center, but they have been contained. Please remain inside your store until you receive further notice. Please follow your store protocol. Please do not send shoppers out into the center.

This is the Sevierville Tanger Mall Management Office. Authorities have asked tenants and shoppers in building 1300 to remain in lockdown until the police visit each tenant space. The police have stated that the balance of the shopping center has been issued an all clear.

This is a message from the Tanger Sevierville Mall Management office. The situation is contained and under control, however, due to the ongoing police investigation into the incident at the outlet center, Tanger will be closing the center at 6 p.m. on 4/16/19. The center plans to reopen at normal operating hours on 4/17/19.

The manager also said they were given the following active shooter protocol in September 2018: "Lock your doors with customers and employees inside, don't let anyone in or out, go to the stockroom and wait for the all clear."

"We do as a management team here practice active shooter training and evacuation training," Angela Harness said. "Unfortunately we are prepared, but hope it would never happen."

On a normal day, there is always an off-duty sheriff's officer on site. Tuesday, Sevierville PD increased patrols to reassure the public. The Coach store where the incident happened in front, was closed. Kate Spade, a sister company also closed it's doors for the day.

When something like this happens Tanger Outlets and Sevierville Police will review the response from start to finish and see where improvements can be made, if they are needed.

They do expect Coach and Kate Spade to reopen Thursday.