Margaret Hunter, 44, is scheduled to be sentenced Sept. 16. Her attorney, Thomas McNamara, declined to say if his client plans to testify against her husband. 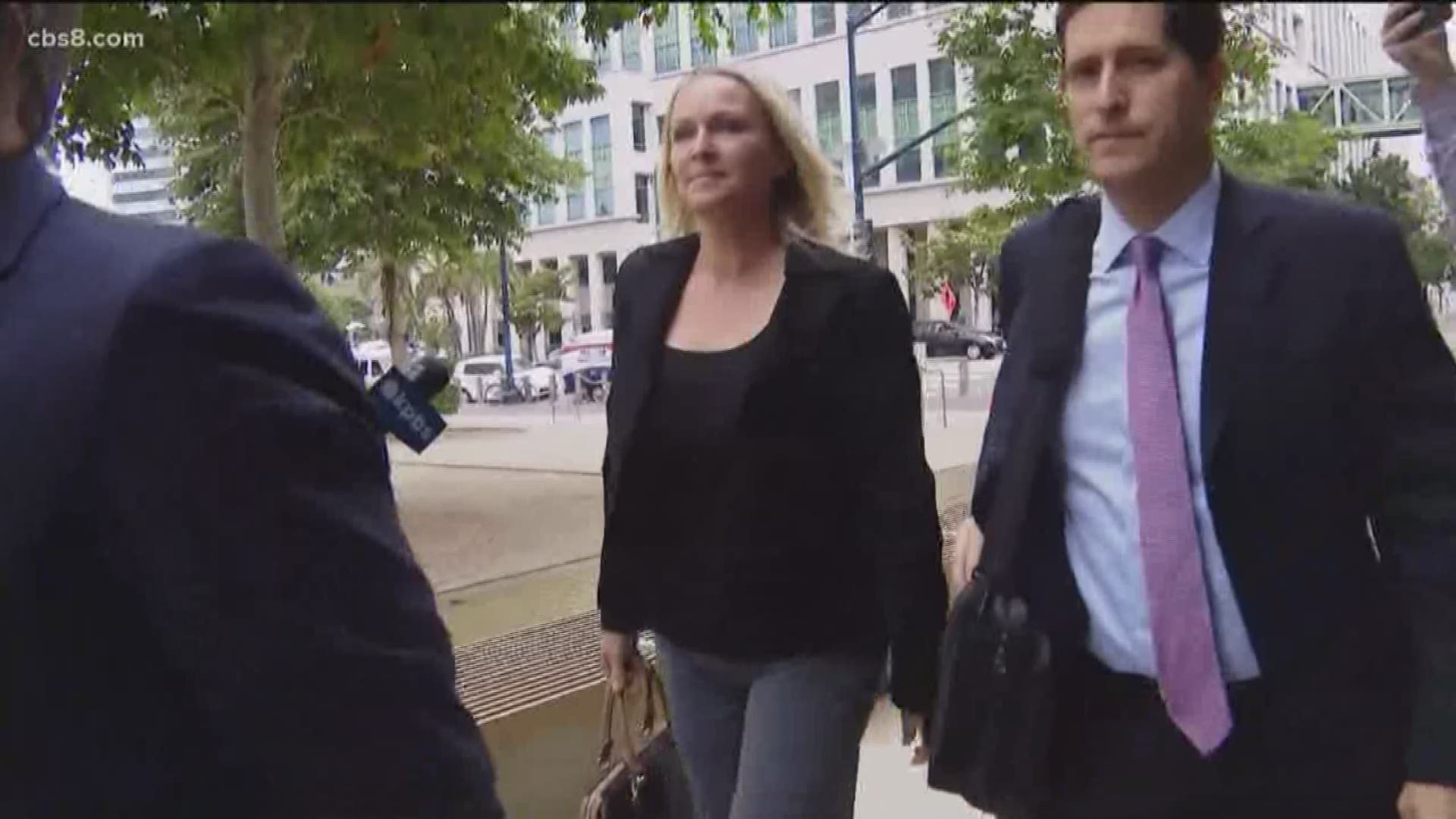 SAN DIEGO — San Diego-area Republican Rep. Duncan Hunter's wife pleaded guilty Thursday to a federal conspiracy charge for using thousands of dollars in campaign funds for personal expenses, but it was unclear if she will testify against her husband, who faces the same charges.

Her attorney, Thomas McNamara, declined to say if his client plans to testify against her husband. The plea agreement with federal prosecutors, however, states that she must "cooperate with the investigation and prosecution of others."

McNamara read a brief statement from Margaret Hunter, in which she apologized for her actions.

"Earlier this morning, I entered a guilty plea before the United States District Court," Margaret Hunter said in the statement. "In doing so, I have fully accepted responsibility for my conduct. I am deeply remorseful and I apologize. I am saddened for the hurt that I've caused my family and others. I understand that there will be more consequences stemming from my actions but as demonstrated this morning with the entry of the plea, I've taken the first step to face those consequences."

Duncan Hunter, 42, and his wife were charged last year in a 60-count indictment of taking money from campaign coffers as if they were personal bank accounts and falsifying Federal Election Commission campaign finance reports to cover their tracks. Both Hunters were slated to go to trial this fall on charges that include conspiracy, wire fraud and falsification of records.

Duncan Hunter issued a statement after his wife entered her plea, again blasting the case as being politically motivated and orchestrated by federal prosecutors "who attended Hillary Clinton fundraisers."

"I do not have the full details of Margaret's case, but it's obvious that the Department of Justice went after her to get to me for political reasons," he said. "As Margaret's case concludes, she should be left alone. I am the congressman, this is my campaign and any further attention on this issue should be directed solely to me."

He added that the case should have been handled by the Federal Elections Commission, and said the DOJ intervened "to inflict as much political damage as possible in hopes of picking up a congressional seat."

Hunter was reelected in November despite the much-publicized indictment. He was first elected to Congress in 2008, when he won the seat his father held for 14 terms.

In a national television interview last year, shortly after the indictment was announced, Hunter appeared to lay blame for the charges on his wife. He told Fox News that his wife "handled my finances throughout my entire military career and that continued on when I got into Congress. She was also the campaign manager, so whatever she did, that'll be looked at, too, I'm sure, but I didn't do it."

The indictment alleges scores of instances beginning in 2009 and continuing through 2016, in which the Hunters -- who have been married since 1998 and have three children -- are accused of illegally using campaign money to pay for such things as family vacations to Italy, Hawaii and Boise, Idaho, school tuition, dental work, theater tickets and smaller purchases, including fast food, tequila shots, golf outings and video games.

The indictment alleges that at one point, Hunter used $600 in campaign cash to fly his pet rabbit to a family vacation.

Margaret Hunter's plea agreement describes the couple living "paycheck to paycheck" after overdrawing their bank account "more than 1,100 times in a seven-year period resulting in approximately $37,761 in `overdraft' and `insufficient funds' bank fees."

Though Margaret Hunter held no official role with the campaign and received no salary, Duncan Hunter requested that she be given a campaign credit card, according to the plea agreement.

The Hunters allegedly misreported the expenses on FEC filings, using false descriptions such as "campaign travel," "toy drives," "dinner with volunteers/contributors" and "gift cards," according to federal prosecutors.

The agreement states that the Hunters would schedule events "that were supposedly campaign-related" near the time of their vacations in order to conceal that their family trips were facilitated with campaign funds.

Among these was a trip the Hunters took to Italy in November 2015, in which a one-day U.S. naval facility tour was scheduled "in an effort to justify the impermissible use of campaign funds to pay for this personal family travel," the agreement states. More than $10,000 in campaign funds were used to pay for the trip, according to prosecutors. Naval officials informed the Hunters that the tour could only be provided on one specific date during their trip, leading Hunter to tell his Chief of Staff, "tell the Navy to go (expletive) themselves," according to the agreement.

His campaign last year blasted the timing of the indictment -- about two months before the Nov. 6 general election -- saying it "appears to be an effort to derail Congressman Hunter's re-election" bid.

Voters opted to keep him in office despite the allegations.

If the congressman is convicted, there is no constitutional provision or House rule that explicitly requires him to lose his seat, even if he is sent to prison or unable to vote on behalf of his district.