10 Rising Hearts: Student honors his brother while supporting a charity close to his heart

"We were identical twins and so you always feel like there's a part of you that is missing. Part of my heart is in heaven." 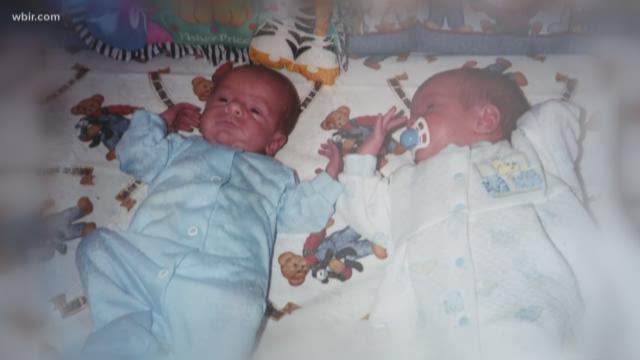 A 5K run this weekend will benefit Ronald McDonald House, a place committed to keeping families together. Families can stay there while a child is in the hospital for an extended stay.

The teenager who organizes the race has a special connection to the organization. He is making a difference in our community and is our latest 10 Rising Heart.

Eighteen years ago, Dylan Wood and his identical twin brother were born in Crossville, about half way between Knoxville and Nashville. Derek was very sick and headed straight to Children's Hospital in Nashville with his dad. A few months later Derek died.

"We were identical twins and so you always feel like there's a part of you that is missing," Dylan Wood said "Part of my heart is in heaven."

While Derek was in the hospital, Ronald McDonald House was a home away from home for their family.

"They give you three hot meals a day. You get a room with beds to sleep in. Pretty much their house is your house is the way I've always see it. And it is phenomenal the work that they do," he said.

When Dylan was a freshman at Cumberland County High School he came up with a way to support the organization that supported his family. He calls it Dash for Derek.

"Dylan is one of those unique kids that really has it all figured out and had it figured out when he was 14 years old something that maybe a lot of adults don't figure out their entire lives," Danny Wilson said.

Danny Wilson is Dylan's agriculture teacher who ran in that first 5k race.

Over the years Dash for Derek has raised about $15,000 for the Ronald McDonald House and raised awareness of what it means for families going through tough times.

The 4th annual Dash for Derek is set for this Saturday morning, September 15, at 9:00 at the Cumberland County Community Complex.

At the race his family is known as Derek's Angels, helping in any way they can. Volunteers are crucial.

It takes an army to get this event planned. You have to set up tents, you have to stuff bags. We're the biggest 5k in Crossville now," Dylan said.

He graduated from high school last May and now is a student at Tennessee Tech.

"I am studying agriculture education to be a high school teacher. So I am going to follow in Mr. Wilson's foot steps and become an educator like the rest of my family is," he said.

Danny Wilson said, "If a man of his character and quality wants to do the same job I'm doing then I am very appreciative of that."

He's a past president of Future Farmers of America at his high school and a distinguished finalist in the Prudential Spirit of Community Awards.

What's ahead for Dylan Wood?

"Whatever Dylan wants. Dylan is an amazing kid."

An amazing kid who honors his twin brother with Dash for Derek.

Earlier this month, his dad, Jay Wood, followed Dylan's example with another benefit. The golf tournament was sponsored by Carrier Enterprises and Action Heating and Cooling. It raised about $3,000.

Here at WBIR-TV, we want to showcase students who reach beyond their schools and families to help make our community better. To nominate a student, please send an email describing them and their community service to 10Hearts@wbir.com.