KCS Superintendent McIntyre to step down

A little more than a month after agreeing to a two-year contract extension and pay raise, Knox County Schools Superintendent Jim McIntyre has agreed to step down in July in exchange for a one-year severance - something board members are expected to approve. 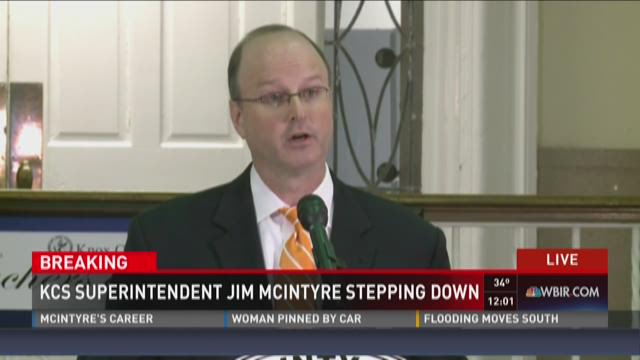 A little more than a month after agreeing to a two-year contract extension and pay raise, Knox County Schools Superintendent Jim McIntyre has agreed to step down in July in exchange for a one-year severance - something board members are expected to approve.

“The current political environment has become increasingly dysfunctional,” said McIntyre, who was hired in the spring of 2008. “At times overtly antagonistic, and seemingly untenable. At recent months the focus of the conversation has all too often become about me, or the school board or other elected officials, rather than around the effective education of our children.”

The school board in the coming weeks will talk about the proposed buyout, which would amount to at least his $227,000 annual salary.

Once approved, McIntyre said his last day would be July 8. He said that he doesn't plan to leave Knox County and wants his children to graduate here.

"It has truly been a great honor and privilege for me to serve as the leader of this school system for eight years," McIntyre said.

The school board will more than likely conduct a national search to find his replacement. The board also will appoint an interim superintendent if one is not hired before McIntyre leaves.

“There is a new school board essentially coming in on Sept. 1. There will be several new members,” McIntyre said. “The new school board deserves to choose the leader that they want to have in place.”

As superintendent, McIntyre oversees a $438 million budget, 90 schools and a 7,500-person workforce that includes almost 5,000 teachers.

“I think it’s the toughest job in any county,” said school board Chairman Doug Harris said. “The respect that I’ve got for this man, it exceeds anything that I can describe.”

"I'm sad to see him go and I think he's done great work for the district, and in the long run, I think it'll be a great loss for our students."

Gov. Bill Haslam called McIntyre "one of the best superintendents in the state," in a statement.

"From Day 1, Jim has focused on student excellence with strategic focus on higher standards, great instruction in the classroom and leadership at the school level," Haslam's statement continues. "The state is losing a leader that has made a noticeable difference in educational opportunity for all students in Knox County. I enjoyed working with him as mayor, and I’ll miss working with him as governor. I wish him all the best wherever his path may take him.”

"Just last year, the Knox County School system was named the first urban school district in the state to receive Exemplary District status," her statement reads. "The district has also exceeded growth expectations for multiple years in a row. These accomplishments are outstanding and will serve Dr. McIntyre well in whatever he chooses to pursue next."

McIntyre, as McQueen alluded, will essentially end his more than 7-year tenure overseeing one of the state's largest school systems on a high note.

Student test grades and graduation rates improved, and the school system received a number of accolades.

The state Department of Education in August 2015 recognized six Knox County schools for topping the state in academic achievement and annual growth, giving them "reward" status – the highest rank possible for individual schools.

Only 12 out of more than 140 school districts statewide were classified as "exemplary," including three in East Tennessee – Knox County and Monroe and Hawkins counties. Knox County is the only large, metropolitan district to ever earn the distinction since this particular state program started, in the 2011-2012 school year.

"He has been an excellent superintendent to move our district forward to levels of achievement we've never seen before," school board member Lynne Fugate said. "He always put the needs of our students first."

"There are so many things we could single out, but I am particularly thankful for his support of the community schools initiative," Boyd, a Knoxvillian, said in a statement. "Knox County is again leading the state and the country in a very innovative “third way,” and we owe much of that progress to Dr. McIntyre. With his talent, experience and record of success, he could choose any number of opportunities."

TROUBLE ON THE HORIZON

McIntyre alluded Monday that he likely faces years of controversy, some that he blamed on the current county leadership.

“When I look carefully at what we know right now about the newly constituted school board, it starting in September, I’m not going to be their guy,” McIntyre said. “I don’t think my leadership, my style, my focus, the way that I go about leading public education is going to be their cup of tea.”

Knox County Mayor Tim Burchett and the superintendent have long butted heads, and at one point Burchett called for his resignation after WBIR 10News revealed that an administrative secretary was placed on paid leave for two years.

McIntyre often asked for more money in his annual proposed budgets than revenue projections allowed. And, a number of county audits questioned some of the school system's spending.

McIntyre also maintained a fairly rocky relationship with teachers who often questioned the way he evaluated them and the amount of testing required for students - especially those in younger grades.

"He did put the kids first in this situation," the mayor said. "He could have battled it out . . . (but) I think he's a better man than a lot of folks are."

"With my experience as an educator, Dr. McIntyre and I didn't always agree on how to achieve excellence for every child, but we did agree on the goal," bounds said. "I look forward to being a part of the process for a new superintendent going forward."

The Board of Education in late November agreed to extend his contract two years, from December 2017 to 2019 and bumped his salary by 2 percent to $227,256.

A few weeks later, the Knox County Commission symbolically rejected the proposal and Knox County Law Director Richard "Bud" Armstrong questioned whether some of the language in it was legal.

"Certainly he's done many wonderful things for our school system," said school board member Terry Hill. " He shook us up and brought new ideas and innovations and made us look forward. He also got us out of our box and made us reach beyond our comfort level. Now I think we can look at settling into what he’s helped the school system accomplish and build more on people and more on relationships."

School Board member Amber Rountree, said she wants the school board to conduct a national search to find McIntyre's replacement - "someone who will help meet our goal of excellence for every child."

"I think that we have an interim candidate in Bob Thomas, the assistant superintendent, who was a finalist for the job back in 2008," she said.

The Knox County BOE hired McIntyre in the spring of 2008, after a year-long process that included whittling down a list of 40 candidates to a handful of finalists.

At the time, officials held a number of community meetings to define the next superintendent’s skill set.

He taught at Vincent Gray Alternative High School, a private academy in East St Louis, Ill. that touts class sizes of eight to 10 students in the early 1990s.

McIntyre earned a master’s degree in urban affairs at Boston University, and a doctorate in public policy at the University of Massachusetts.

He joined the Boston Public Schools’ finance office in 1997 where he worked as an intern. McIntyre was quickly promoted to budget director and deputy chief financial officer where he helmed a school district of roughly 56,000 students, 9,000 employees and budget of more than $800 million, according to his resume.

In 2006, McIntyre took over as BPS chief operating officer.

For much of McIntyre's almost eight years, he maintained strong control over the 9-member school board, which many local leaders felt was nothing more than a rubber stamp for his ideas.

In recent years, however, he began losing that grip and most political observers say he has only a slight 5-4 control over it.

However, that's expected to change in September. Three board members who often vote in his favor - Doug Harris, Karen Carson and Tracie Sanger - opted not to seek re-election.

Because no one else challenged him, Norman is all but a lock for the seat when new board members officially take office in September.

Norman, who has long opposed McIntyre and often publicly clashed with him, would shift the voting block to at least 5-4 against the superintendent.

"I think there are a huge number of teachers who will receive an immediate boost in their morale," Norman said after hearing that McIntyre was stepping down.

McIntyre said he wants whoever takes over - as well as the new school board - "to build on the success that we've had."

"I think we’re going to see a very different school board constituted on Sept. 1," McIntyre said. "I think they’ll have some different thoughts and ideas about the direction that they want to go in. I’m sure we all agree on the goal of an outstanding education for kids, but I think there will be some differences of opinion about how to get there, and how to approach that. I think it just makes sense for me to make room for that newly constituted school board to be able to choose their own leader."