Senior U.S. District Court Judge Ronnie Greer put down his order Friday. He'll now weigh responses from the Board of Education and the parents who filed the lawsuit. 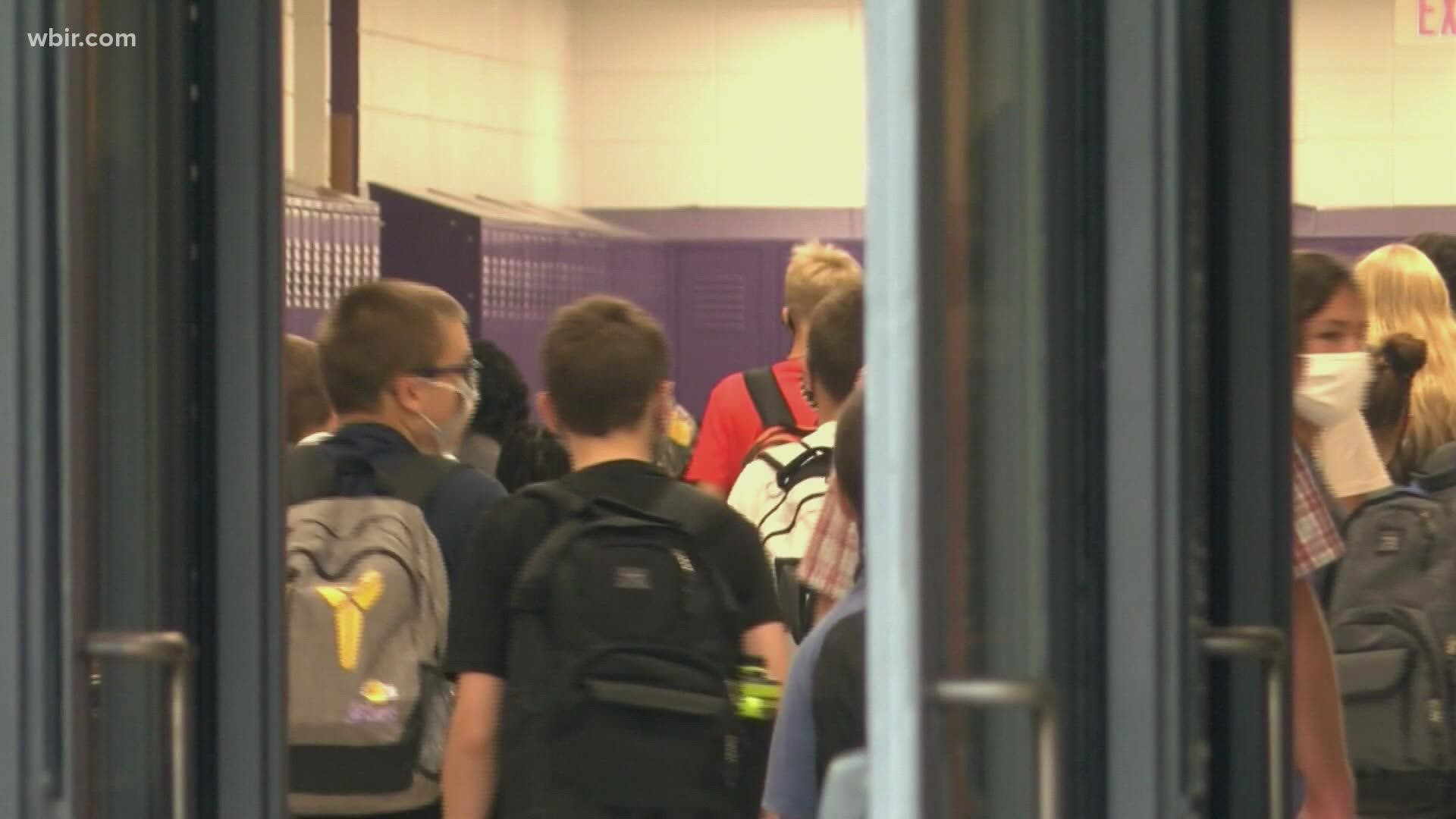 GREENEVILLE, Tennessee — UPDATE FRIDAY: Parents suing the Knox County Board of Education over lack of a school mask mandate say they're not adamantly opposed to expanding the kinds of people who could be spared having to wear a mask.

But, they think a treating doctor should weigh in on any exemption.

In filings submitted Friday in U.S. District Court in Greeneville, the plaintiffs said they agree with the school system that an individualized approach to those who say they can't wear a mask is best "because disability is normally an individualized inquiry rather than a categorical one based on diagnosis."

"Masks are appropriate for the vast majority of children with underlying health conditions, with rare exception," wrote attorneys Justin Gilbert and Jessica Salonus on behalf of the parents who filed suit.

This only stops when we make it stop. pic.twitter.com/iKCBg42Qzj

"The obvious concern is ensuring that the tail (the exemption) does not wag the dog (universal masking). Knox County schools were quite successful in masking a year ago. For this reason, it reasons that the same protocols a year ago should be implemented now, too."

The lawyers noted that Gov. Bill Lee's decision this week to extend his opt-out provision for parents is discouraging further compliance. Further complicating the situation, they wrote, are tweets by state Rep. Jason Zachary of Knoxville calling for a boycott of Judge Ronnie Greer's order.

Rather than use the lengthy list of exemptions offered by Knox County, the plaintiffs suggest an "individualized inquiry" whether someone needs a mask exemption.

Also, they argue, "To prevent the exemption from swallowing the masking rule, Plaintiffs suggest that exemptions from masking (students, teachers and visitors alike) be accompanied by proof from the individual's treating physician certifying the existence of the condition/disability and that such condition prevents wearing a facial mask for that person."

It will be up to Greer, having heard now from both the school board and from parents, to decide how if at all he wants to change his order.

PREVIOUS STORY: The Knox County Board of Education filed a list of proposed medical exemptions to the court-ordered mask mandate on Wednesday.

In the filing, the BOE said it "continues to assert that a list of medical conditions to be exempted is not a workable system" and that mask exemptions should be determined "on an individualized basis."

The list of at least 60 medical and behavioral conditions was put together based on staff consultations and parent submissions, according to the BOE.

The BOE said the listed conditions do not imply every student is not able to wear a mask but were included "in order to comply with the Order."

The Knox County Board of Education has asked a federal judge to exempt students with certain medical conditions from the mask mandate.
These include:
-Asthma
-Anxiety
-ADHD
-Autism
-Depression
-Diabetes
-Epilepsy
-Long COVID-19
-All Pre-K Studentshttps://t.co/Qa8zOhxpx1

UPDATE (Sept. 27, 2021): Knox County Schools Superintendent Bob Thomas provided new details on how the school system will enforce a court-issued mask mandate after the school system filed a motion in court to amend the judgment to bring it more in line with rules implemented last school year.

In a letter to parents, Thomas said KCS has been using the day off Monday to ensure schools are ready to follow the federal order -- saying it is their "expectation" that everyone wears face coverings while indoors or when riding a school bus.

"At this time, the only exemptions allowed in the federal order are for students with autism or with a tracheotomy. I am asking that you please do all you can to help us and comply with this federal order," Thomas said.

KCS is implementing discipline measures similar to last school year for children that don't follow the rule, which includes two verbal warnings, followed by removal from the general school population, followed by parent pick-up on the fourth offense.

"Students who refuse to wear a mask will be allowed in the school building, but please know they will not be in their regular classroom. A parent/guardian may take their child home for refusing to wear a mask, but the child’s absence will be counted as unexcused," the letter read.

As it prepares to follow the ruling, the Knox County Board of Education has filed a motion to amend the judgment handed down Friday.

Court documents filed by Knox County deputy law director David Sanders show the BOE is asking the court to amend the ruling to allow the school system to follow the same masking rules that were in place during the 2020-21 school year.

The rules are similar in function to the ones being implemented currently but allowed for students, employees and visitors to remove face coverings on a "case-by-case" basis -- such as times when students were able to be six feet apart. The BOE also argued the list of exemptions provided by the ruling only allowed children with autism and tracheotomy to be excluded from the mandate, saying it should include other medical and behavioral disorders and allow exemptions for the youngest pre-school students.

"Giving KCS staff members the freedom to grant such exemptions in a manner it did last year would allow them to comply with federal disability and Special Education law, while also following the Court's directive," the filing read.

Tennessee Governor Bill Lee is also appealing the portion of the ruling that blocked his executive order allowing parents to opt their children out of any mask mandates. The judge's ruling specifically blocked the opt-out order in Knox County Schools, but not other school systems.

Following a federal judge's ruling on Friday, the Knox County Board of Education must impose a mask mandate for schoolchildren. Thomas also confirmed it on Friday, saying that starting Sept. 27 all students, employees and visitors will be required to wear a face mask while indoors or riding a school bus.

The judge said that Knox County Schools would be required to enforce the mask mandate that was in place during the 2020-2021 school year, in order to protect at-risk students from COVID-19.

Per Knox County Board of Education Policy C-240 that the board voted on in April, masks are still required even if there is adequate social distancing. However, masks are not required outdoors or when eating or drinking.

If a student is found breaking this policy, the first and second offense is met with a verbal warning and masks will be offered both times.

The third offense is for students to be quarantined from the general population. This means that the student will be placed in an outdoor seating area, weather permitting.

On the fourth offense, the student's parents will have to pick up the child from school. Students who cannot be picked up will be placed in an outdoor seating area, weather permitting.

"As we enter into the week on Monday, please remember to empathize with the teachers, administrators, and other school staff that are trying to fulfill their duties and enforce the order by a federal judge," said one principal. "While many have differing opinions on the matter, we will not let disagreements about COVID mitigation get in the way of pursuing our goal as a school of creating the world’s greatest thinkers and problem solvers."

U.S. District Court Judge Ronnie Greer acted in response to a lawsuit filed in September by the parents of four Knox County Schools schoolchildren who argued their children were vulnerable to health risks because the school system had no mask mandate in place.

Greer said the Knox County school board, which has struggled to come to any agreement on a mask rule, must put in the mask mandate it used last school year.

"We are currently reviewing the order to determine what this means for our students and staff," KCS spokeswoman, Carly Harrington, told WBIR on Friday afternoon.

"The Board of Education and Knox County Law Department are still reviewing the judge’s order and how it will impact schools and classrooms across the district," school board Chair, Kristi Kristy, said.

The order granting the preliminary injunction will remain in place as the parents pursue their lawsuit against the Board of Education and Lee. They told Greer last week in a hearing in Greeneville that their children suffered a health affliction that made them vulnerable without a mask order.

The parents said under the federal Americans With Disabilities Act their children are entitled to attend school in person with health protections. Greer agreed.

"This case requires the Court to consider the ADA's mandate of social integration in an unprecedented context by addressing how a board of education must reasonably accommodate medically compromised students when COVID-19 is now part of daily life inside their schools' walls," Greer observed.

Lee and several school systems or boards in Tennessee have come under legal attack over masks. Parents argue masks protect their children and help stop the spread of COVID-19, which in recent weeks has spread rapidly across the state because so many people are unvaccinated and because of the strength of the Delta variant. 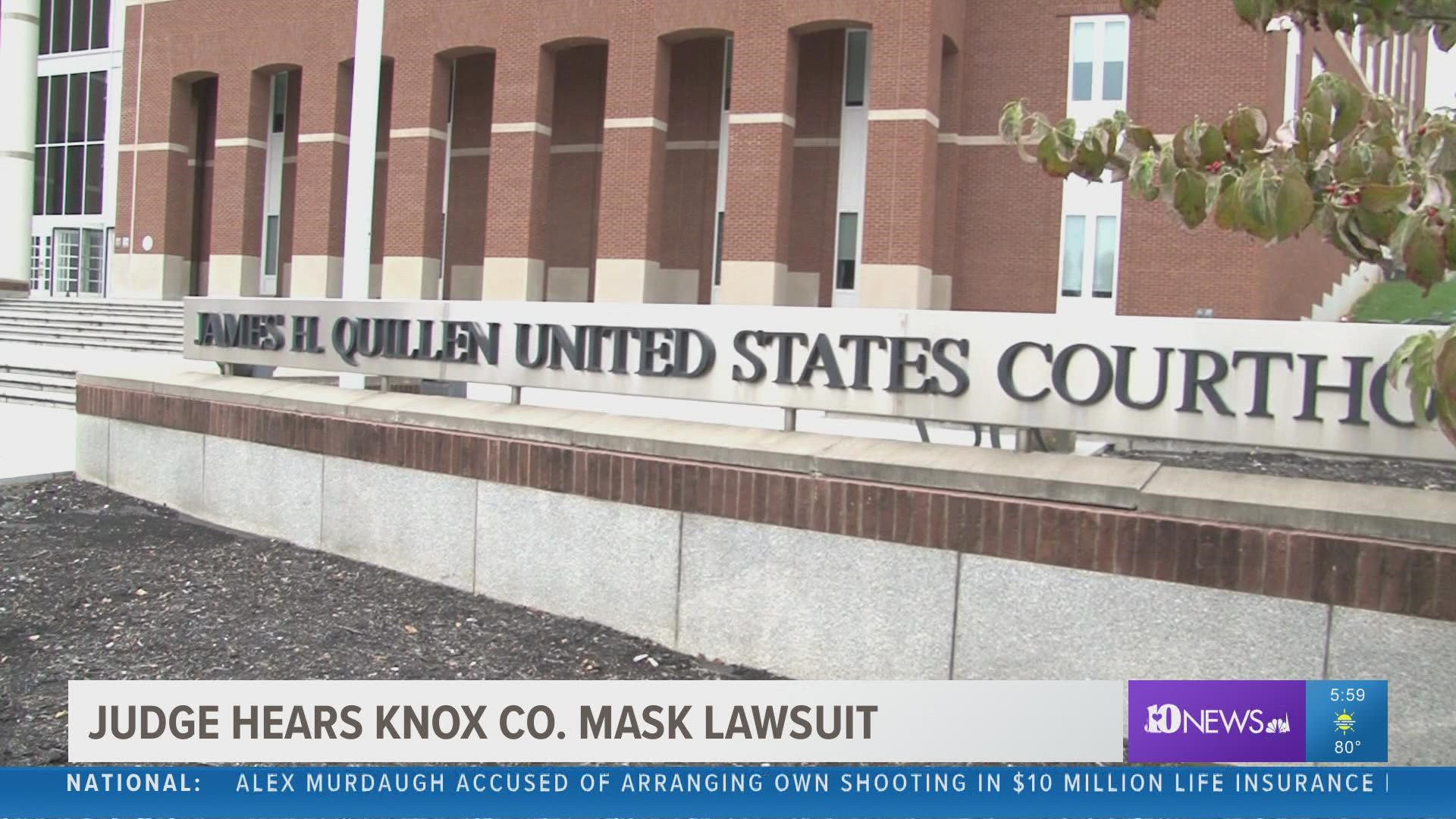 In pondering his ruling, Greer posed and then answered his own question: "Is the invisible barrier that COVID-19 places between plaintiffs and their classrooms necessarily any different from a physical barrier that a stairwell places between wheelchair-bound students and their classrooms? In other words, does the ADA require a board of education to make reasonable accommodations to curb COVID-19 so that highly vulnerable individuals like plaintiffs can physically enter their school buildings, just as the ADA requires a board of education to construct a ramp so that wheelchair-bound students can physically enter their school buildings?"

As part of his order, the judge said any student with autism or a tracheotomy would be exempt from a Knox County school mask mandate.

The Board of Education must identify in writing any other medical conditions it thinks would require a mask exemption, and the judge wrote, it must submit that to him within five days. Plaintiffs then must respond to that "within 48 hours."

Superintendent Bob Thomas addressed the ruling in a letter to families. It is available below:

I want to address an important development concerning our district’s response to COVID-19. This afternoon, U.S. District Judge Ronnie Greer issued a preliminary injunction which ordered the Knox County Board of Education to immediately enforce the face covering mandate which was in place during the 2020-21 school year.

In conjunction with the Knox County Law Department, the district is reviewing the judge’s order and working to understand its implications. However, we do want to provide our families, students and employees with preliminary guidance in preparation for next week.

Beginning Monday, Sept. 27, all our students, employees, and visitors will be required to wear a face covering when indoors at one of our facilities or riding a school bus or shuttle, until further notice. Any individual with autism or with a tracheotomy is exempt; however, parents who have students with autism who can wear a face covering are encouraged to do so.

Others with a documented medical condition may be exempted from this policy pending court approval.

We recognize that this is a sensitive topic and that there are a wide variety of strongly held feelings about COVID-19 mitigation measures. At the same time, I want to make very clear that we are required to implement this order.

On Friday, Sept. 24, Superintendent Bob Thomas sent a message to KCS families regarding a federal order concerning face coverings within our schools. The full letter is available on our website: https://t.co/lfXEs6S6Mx. pic.twitter.com/cCrWRgzaOE