With school starting in less than a month, the technology team with KCS is working hard to get devices distributed to schools. 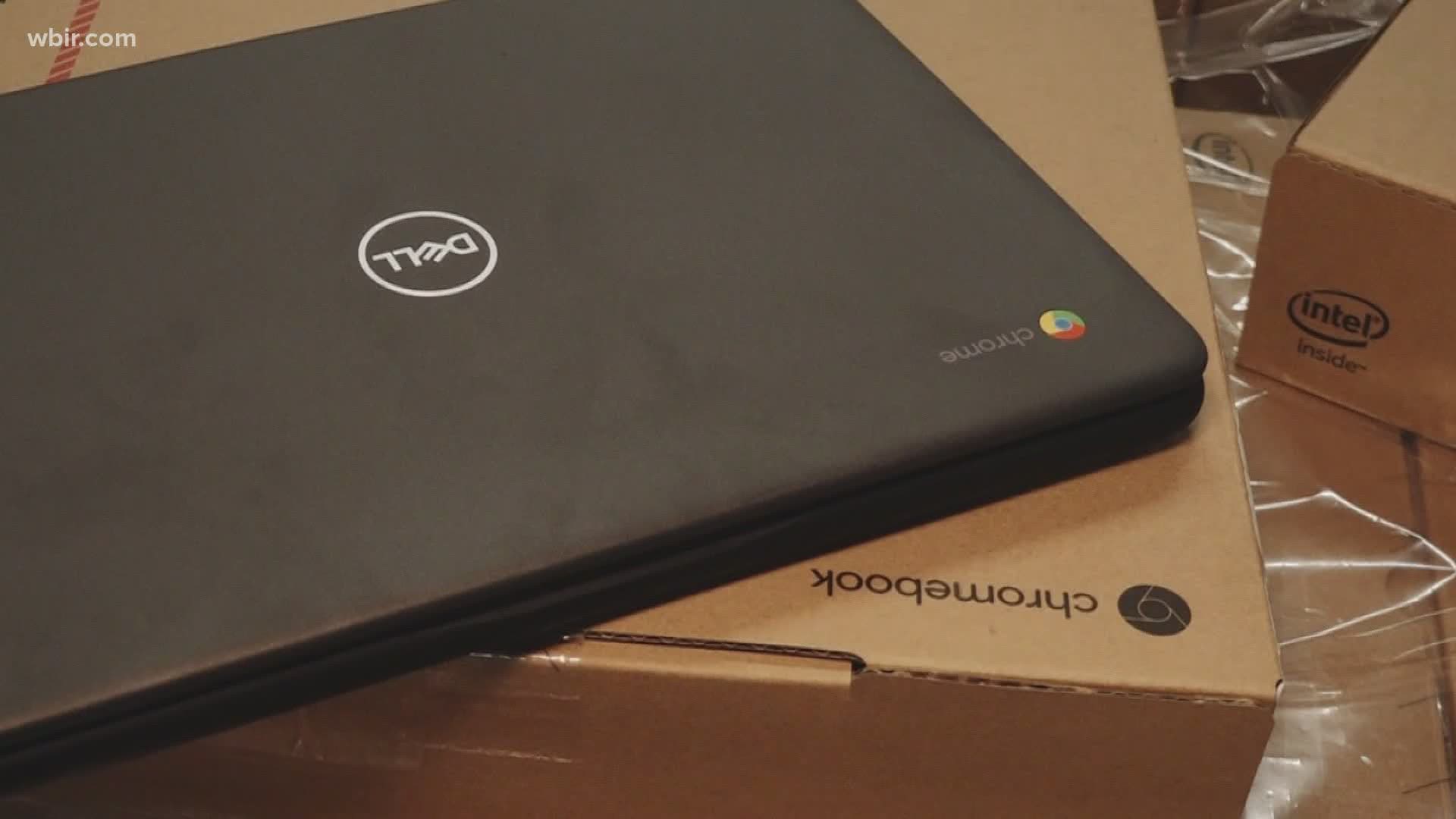 KNOX COUNTY, Tenn. — As Knox County students prepare for either an in-person or virtual learning experience this school year, the district's IT team is working to get Chromebooks in and deployed to schools.

Chief Technology Officer Gail Byard said they are getting shipments in quantities of about 2,500. They will need enough devices to serve 60,000 students.

"It's a huge project," said Byard. "It probably would have been a 2-year roll-out in normal circumstances and we are doing it in about 3 - 4 months, definitely fast-tracked."

"We are asking for patience from our schools, they are very eager to get devices out to students, but we are waiting on shipments and it's a very tight timeline and we are going to be very close to the start of the school by the time we get the devices," Byard said. "It's a bit of a logistic challenge and we appreciate patience from folks."

Officials said the district was not able to order 60,000 devices, but closer to 40,000. This year, they will supplement the 20,000 gap with devices that were previously in schools.

Some schools already had enough devices for their students or had already purchased Chromebooks for their use. Those will be combined with the quantity they ordered.

When the computers arrive, they are sent to the school's warehouse where they are scanned into the system before being sent to schools where the schools will then distribute them.

"Basically what happens is the truck shows up and we get a shipment," explained John Dendrinos, IT Asset Manager. "We fill the orders based on need by the schools, then in the afternoon, our mail delivery guys deliver to schools. The school receives an inventory and then they are ready for deployment."

RELATED: Knox County Schools registration forms for computers to be available July 17, as part of 1:1 plan

The computers also come pre-programmed with the web-based applications students will need.

"On a normal day, these would come in and our staff would have to enroll them and configure them for our network," explained Freddie Cox, IT Infrastructure Manager. "Luckily on this project we have been able to have all that done when they arrive. So all we focus on today is getting them from this warehouse out to our schools."

Each computer will also have special security measures.

"On each of the Chromebooks we do have filtering applications, not only from inappropriate material but things that could pose an IT security risk," said Cox. "We are looking at it from malware and security all the way up to protecting the students."

Even with the Chromebooks being pre-programmed, it's a lot of quick work for the team. A few temporary works have also been hired to assist.

"It's been a challenge, we have about 29 technicians that are field-based, then we have our managers who work based in the central office. All hands on deck," said Byard. "It's a big project with very few staff and it's a challenge."

As of Tuesday, July 21st, the Chromebooks were not yet halfway through distribution.

There are two different models of Chromebooks that will be given out to students. Students K-2 will get a Dell Touch Chromebook.

"This unit can turn around and flip around and become a tablet," said John Dendrinos. "It is rugged built, it can withstand a drop test from about 3 or 4 feet. It also has gorilla glass."

Students in grades 3-12 will receive a regular Chromebook.

"It's not touch screen and does not flip around," said John Dendrinos. "A traditional notebook situation, where it flips up. As far as specs go it's the same specs and speed and memory."

The Chromebooks are available for free, but parents will have the option of paying $30 for insurance on the device.

The initiative was partly funded by the federal CARES Act, which distributed funds across the U.S. to help communities recover from the coronavirus pandemic.

"We will replace devices on a cycle as they age out, and buy new ones," said Byard. "Students will have a new device throughout the course of their educational career, but this year we will be using some used devices as we start out."

Right now, KCS is not worried about not having enough devices when school starts for students.

As the tech teams work to complete the project, they're asking for patience and said it's a district-wide effort.

"Every day you hang out with both hands, from receiving and inventorying all this equipment, communicating with our principals, it has truly been a team effort. We have had folks from custodians, maintenance, our food service department, principal all across the board are helping with this project and it wouldn't have happened without their help," said Freddie Cox.

Anyone having trouble with their student's Chromebook can email helpdesk@knoxschools.org with questions or call the help desk line at 865-594-1830. Note there may be high call volume.